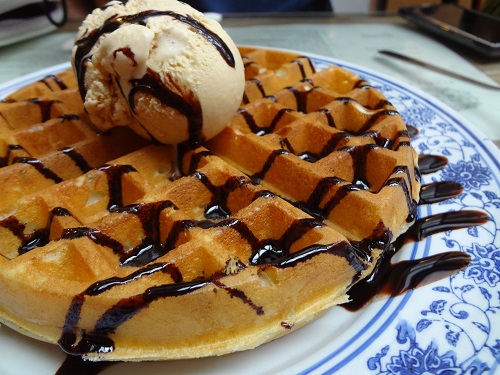 I’ve been bugging my parents for ages to go to Wimbly Lu because everyone keeps talking about it! On instagram, on twitter, it’s like if I don’t check out this place, I’m missing out. The very first time I came to know about it was through instagram (the power of the internet and apps nowadays) and I called this place the “nice ambience and cosy dessert place”.

Entering the shop today, I saw clearly why is it that everyone that I know kept singing praises about this place. The décor itself was a winner! The entire café was split into 2 sections, one whereby the light source was entirely natural with clear glass panels above the seating area, and the other one dimly lighted by cosy orange lights filled with comfortable sofa chairs for the bigger crowd. Before we got seated, there were also displays of certain pastries that they had along the entrance for takeaways; and an open concept kitchen (or sorts?) whereby there were all the busy baristas brewing your cup of latte, and the pastry chefs baking away! We reached at about 6pm and it was already a full house! (we had to wait for a couple of minutes before we were given a table)

Sadly, we were given a seat at the section under the clear glass panels which was really really crammed. To our left was a young couple less than or about 30 cm away from me, and to our right was a group of young adults chatting away. (so out of place they were) I was pretty sure my parents are the oldest people seated in the café at that point of time. This is clearly deemed as a trendy place for the teens and young adults to hang out at.

Since we’re having desserts for dinner, the 4 of us ordered the lemon meringue pie, waffle with salted caramel ice cream, root beer cake with vanilla ice cream, molten lava cake, apple pie and crepe with rum and raisin ice cream. To make sure there is some balance between the sweet and savoury, we also got ourselves fries and nuggets! (more like for my brother since I only had a fry and a nugget.) 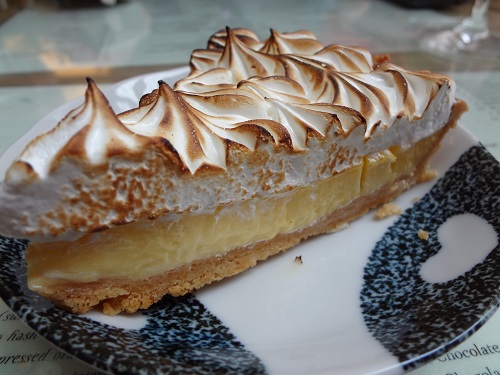 I’ve been craving for this for as long as I can remember, having watched Masterchef US on youtube. The Lemon Meringue Pie was tangy and real sour. Definitely not for the sweet toothed but it was just the way we liked it. Mum thought that the crust of the pie could have been slightly more flavourful, but I was fine with it! Both my brother and I couldn’t get enough of it. 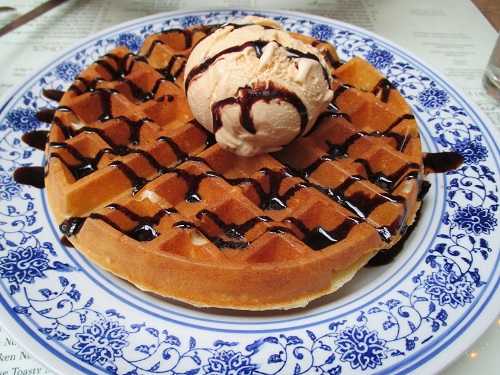 All of us adored the waffles! It was so soft and fluffy on the inside and crispy on the outside. We couldn’t have asked for more, unless it’s for more waffles! The handmade Salted Caramel Ice Cream was extremely tasty too. It was so fine, together with the waffles; it just melts in your mouth like a perfect harmony. 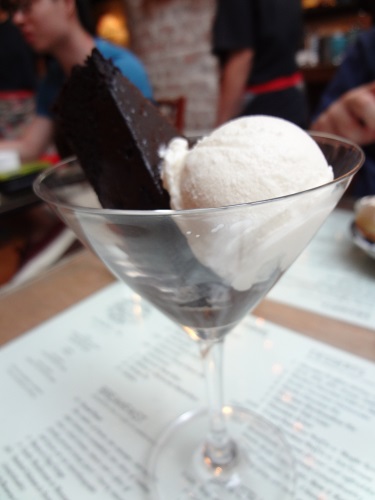 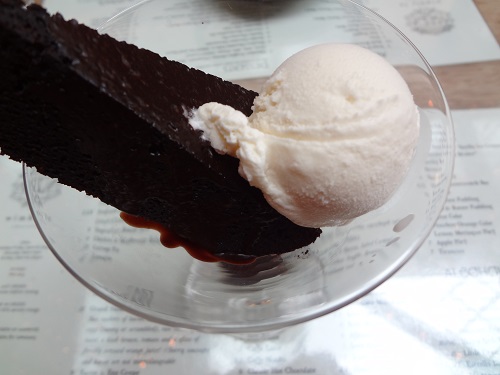 We have no idea why this is called the Root Beer Cake. Surely a real Root Beer Cake probably would taste something out of the ordinary, but the one that Wimbly Lu has tasted like chocolate cake with a droplet of root beer at the bottom of the cup. The cake was also more of the dry side, if eaten on its own, it would be extremely rough on the throat. Luckily there’s the fine lovely and aromatic vanilla ice cream to save the day! 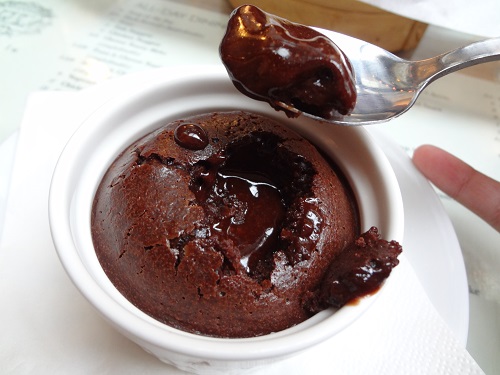 This one I was real excited about because I am a huge huge fan of Chocolate Lava Cake! My brother didn’t even take a bite because he claimed that it would be dry and he’ll have sore throat the next day. (he and his nonsense) When I first took a bite of the cake, two words popped into my mind: ‘too rich’. If you’ve never eaten anything that’s too rich, Wimbly Lu’s Molten Lava Chocolate Cake is a real good example! Don’t underestimate its small and cute size, the cake is rather deadly on your throat. My mum and I got sick of it after a few mouthfuls because it was so dry and way too rich for our liking. My father ended up having to finish everything (hoho) 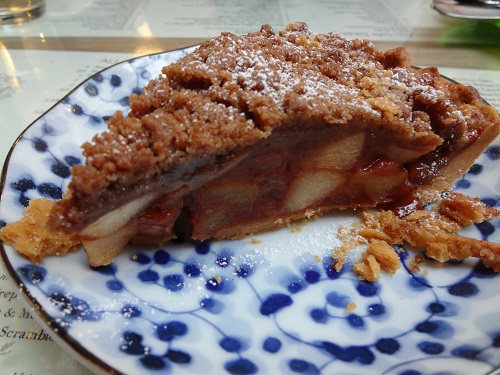 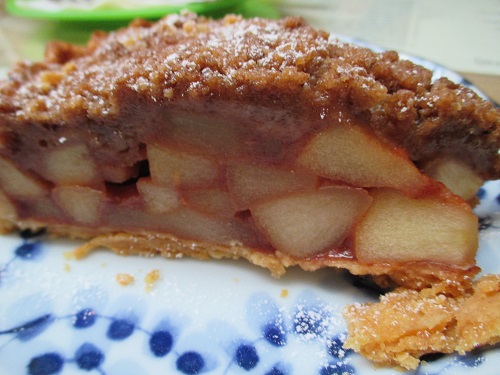 The crust was just like the one of the Lemon Meringue Pie’s. I’m a huge sucker for apple pie so I ordered this. What I like about the Apple Pie is that the apples that they used seemed rather fresh to me. They were slightly sour with a bit of that crunch, as opposed to the sweet cinnamon topping and sauce that they had. Both the sweet and sour components worked very well together, my mum and I loved it! (FYI my brother and father aren’t exactly fans of apple pies so they didn’t touch it) 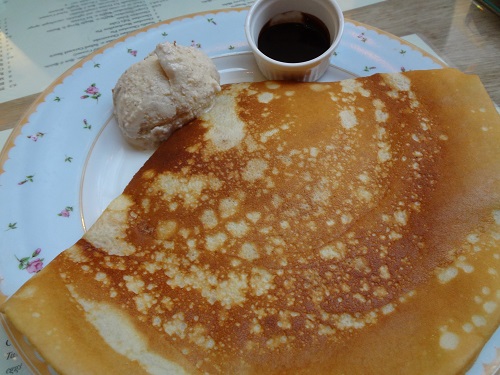 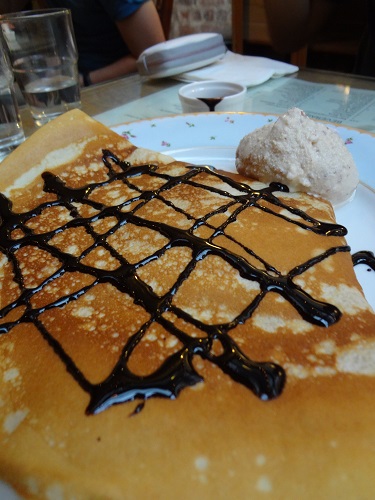 DO NOT ORDER THIS. The Crepe was apparently the same mixture used to make the waffles, however because this was a Crepe, it was really hard; making it rather hard to eat too. The Rum and Raisin like the other ice creams were really fine and flavourful. In fact, all of their ice creams didn’t fail to wow us mouthful after mouthful! 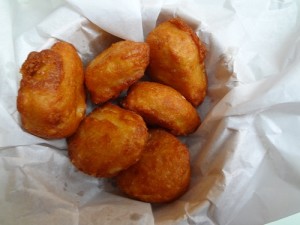 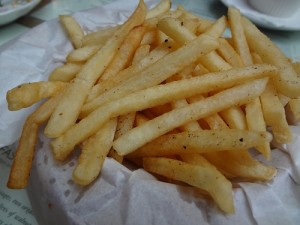 As you can see they were shoe string fries that were lightly salted with a little black pepper (?) to taste. The nuggets were rather tasty, but they were of no difference from the regular frozen chicken nuggets you can get from the supermarket, other than the fact that it is pretty chunky.

Wimbly Lu is the place to go if you’re looking for a place to chill and hang out with your group of friends over dessert. We strongly suggest that you best go during off-peak hours because the crowd might get a little too overwhelming at times! The desserts were all relatively decently priced and reasonably tasting. If I’m ever going back, it’s to see if I can have a chance at those sofa chairs! 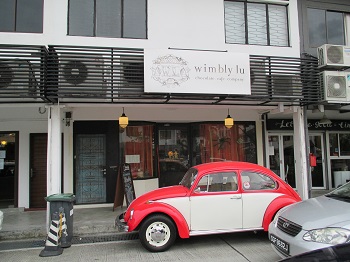 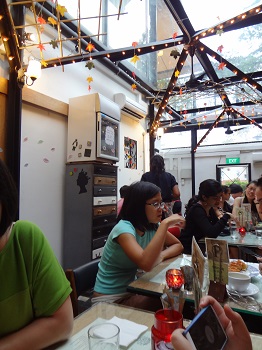