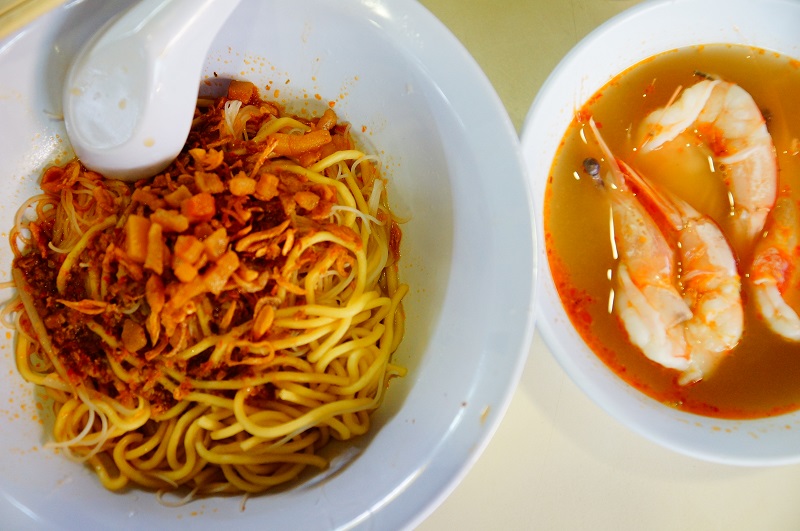 On recommendation by one of the bosses at Da Tou Xia Yummy Prawn Noodle House as one of his favorites, we headed to the stall immediately the very next day. What’s the hurry? Firstly, for a prawn mee stall owner to recommend a competitor’s – it piqued our interest immediately. But most importantly, the Glutton family is on a mission to hunt for the best prawn noodle in Singapore, and time is of the essence in making fair assessments. So we couldn’t afford to wait any longer! 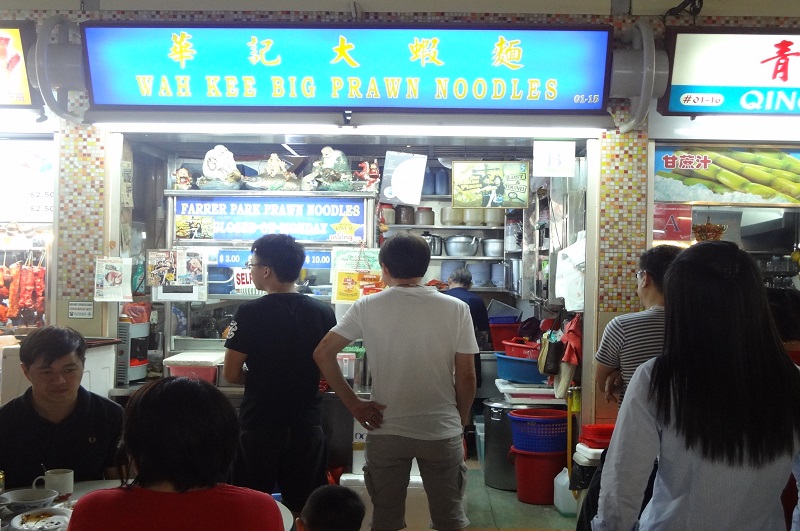 Wah Kee Big Prawn Mee occupies a stall in the Pek Kio Market and Food Centre, and honestly speaking, this is the first time in our lives visiting this food centre and we had no clue where it was at first. The food centre is actually hidden in one of the small estates near the Serangoon area, with few HDB units making up the small community. Yet another happy discovery by The Glutton Family!

We tried the $5 dry version prawn mee and the $10 big prawn soup version.

As usual, assessing prawn mee always starts with the taste of the broth, a good or bad prawn mee is very much determined by the quality of the broth. We are happy the soup was on the mild side and not overpowered by the seafood flavour and other ingredients; the prawn soup taste was unpretentious and straight forward, it carries almost pure sweetness from the shrimp flavour and nothing else, more importantly, it was not overly strong to the taste of fishiness that we experienced in some of the famous prawn mee stalls or shops.

The broth was good but how about the mee?  We came with high expectations but the dry prawn mee was mediocre, the chili sauce was too bland and the sourness from the excessive vinegar overpowered everything in the bowl of prawn mee. Though the mee has the right texture and the prawns were fresh, however, the four of us agreed that this is too far off the mark to be confidently called a good prawn mee. 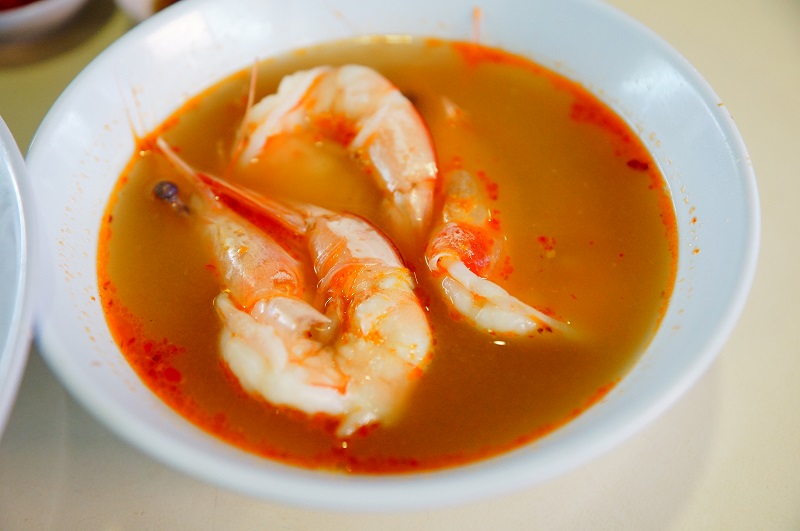 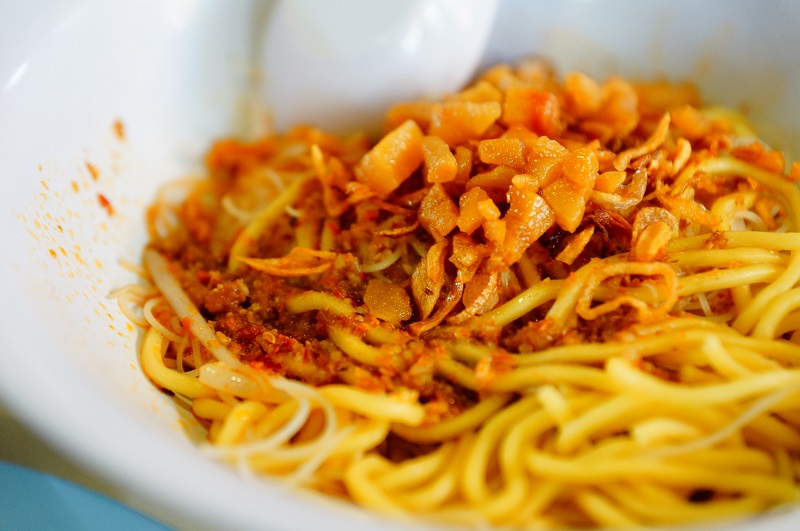 The dry prawn mee is a disappointment but we know the soupy version will not face the same criticism from us, as we were already impressed by the soup. The soup version comes with a price tag of $10 with three big prawns. You can go for the $15 or $20 serving, and even bigger prawn or king prawns. Not cheap, especially from a food stall. 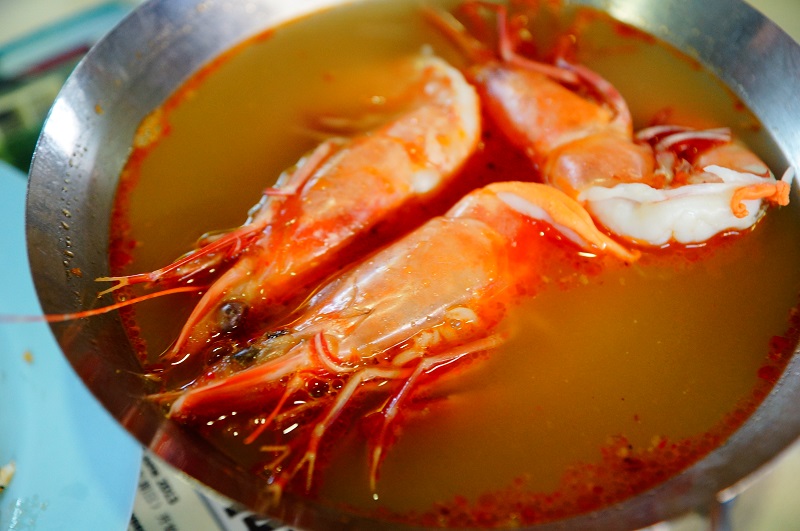 We ordered the yellow mee mixed with thin mee hoon, somehow, we prefer the slightly thicker version of mee hoon than the usual thin mee hoon in the prawn mee, it just blends better with the  prawn mee in both the wet and dry version, we are just fans of the textures it creates. 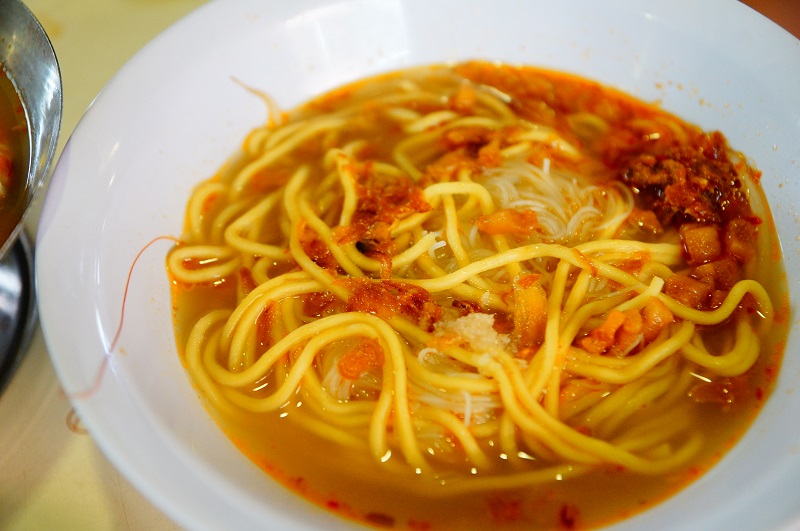 Our verdict, no doubt Wah Kee Big Prawn Mee has superior prawn broth and the substance of a good prawn mee, however, we can only endorse the soupy version and not the dry version. May be we are just not that lucky on that day but if this is what Wah Kee can do, we regret to say that their dry version just isn’t up to scratch! Until otherwise proven, it’s only the soup version for us from Wah Kee.