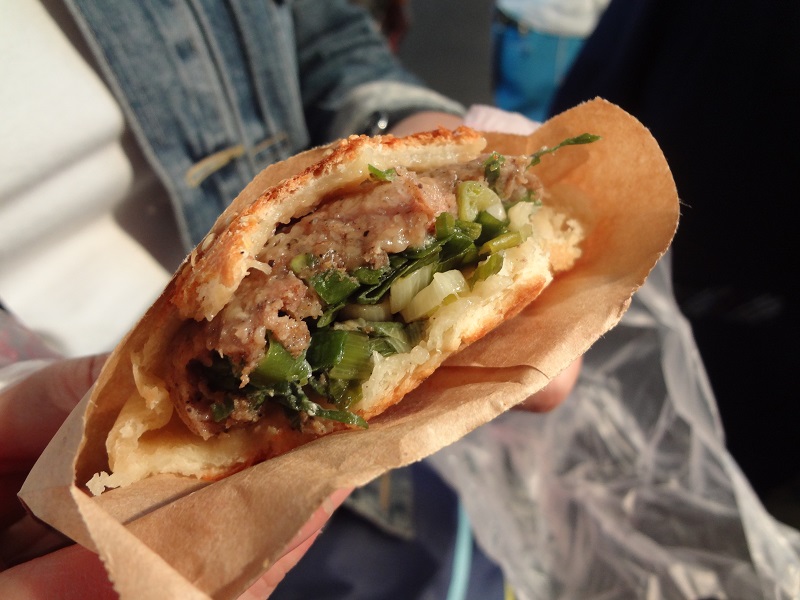 For all those that followed us on Instagram, you all should have known that the glutton family recently went overseas… To TAIWAN! We have to say, Taiwan is indeed a food and shopping heaven. Not only do they have plenty of variety, the fruits and vegetables were especially fresh and sweet! Always look out for road side stalls selling fruits; their guava, pineapple and jambu just to name a few are choices you cannot go wrong with. Without further ado, here are some highlights in Koah Siung, Taiwan! 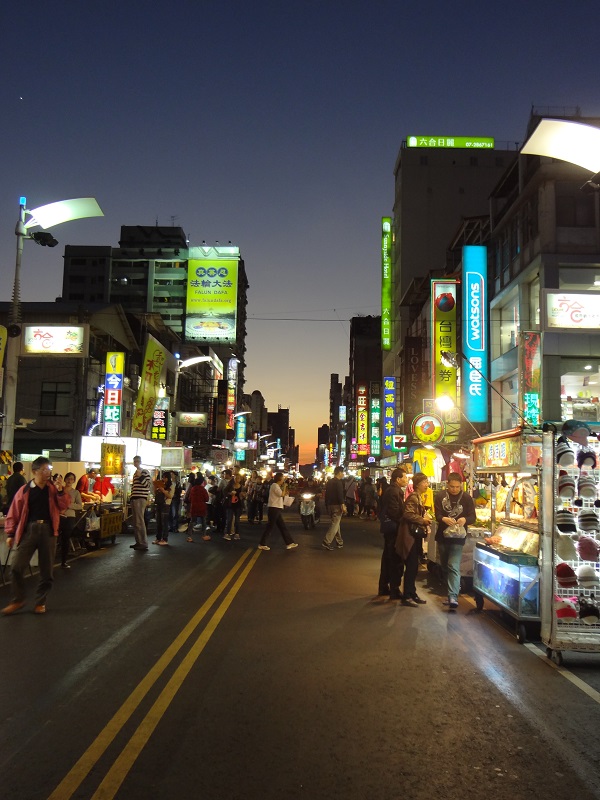 Service – We have to admit, the hotel staff definitely lived up to its name! The staff there were all extremely friendly and helpful, be it the security guard, doorman, or the receptionist. It was a joy staying there!

Food – The interesting thing about this hotel is that they have got a station that has got free ice cream available 24/7 to the hotel residents! There is also free breakfast for every day of your stay, and you will also have access to this special dessert section whereby they serve small desserts and snacks from 1700 – 2300 daily. Do note however that although the spread of the breakfast food is rather huge, the spread doesn’t change on a daily basis.

Extras – They have got quite a number of Apple desktops that residents can use for free, and there’s also free wifi available in your own rooms. 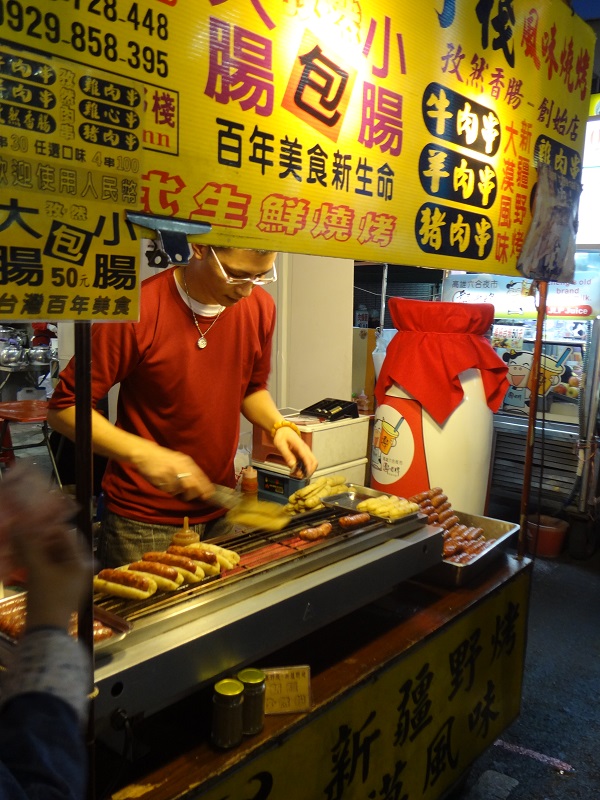 This was the first stall that we bumped into at Koah Siung, located right at the entrance or exit of Liou He Night Market, depending on where you enter. What it actually means if you translate it directly to English is big sausage wrapped around a small sausage. It is actually glutinous rice made into the shape of a sausage, which would have a slit to contain a real Taiwanese meat sausage. 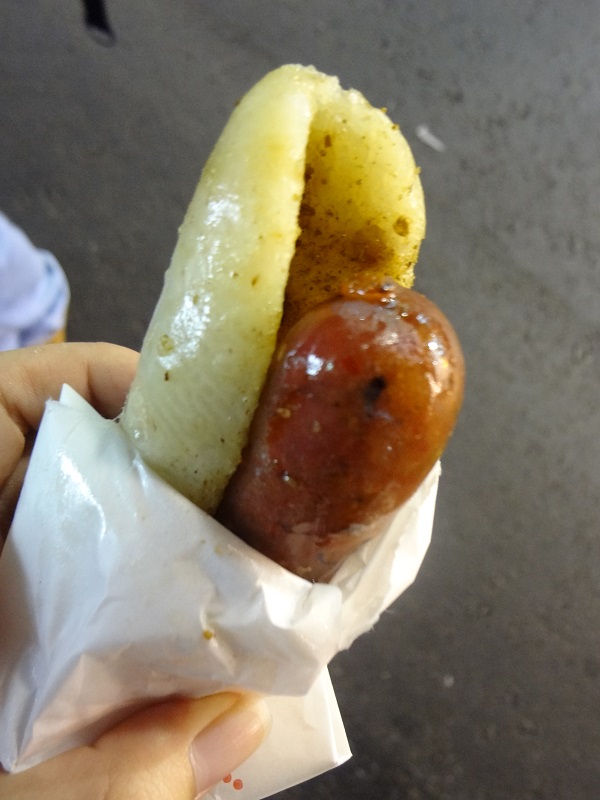 While the idea of the snack itself was pretty interesting, the glutinous rice from this stall was a tad too hard to our liking. The sausage was rather tasty though. You might also want to take note that the glutinous rice fills you up pretty easily, so don’t be too greedy! 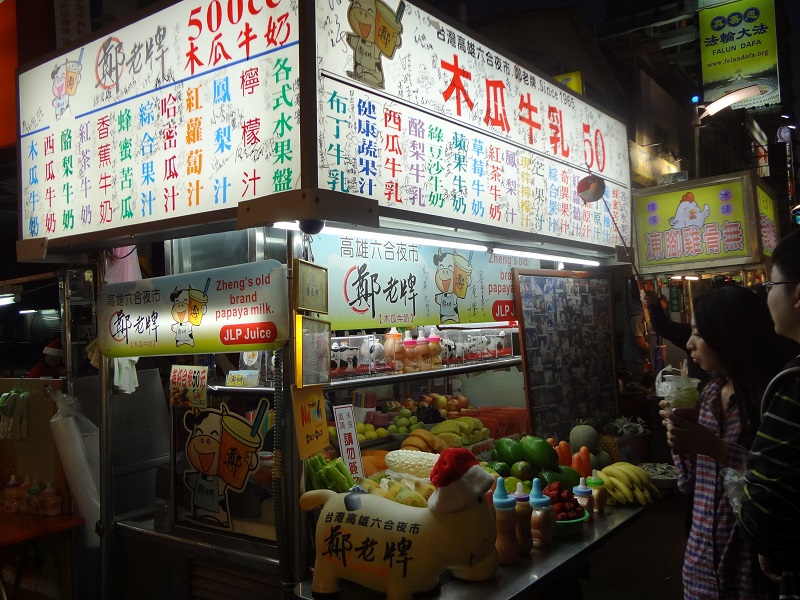 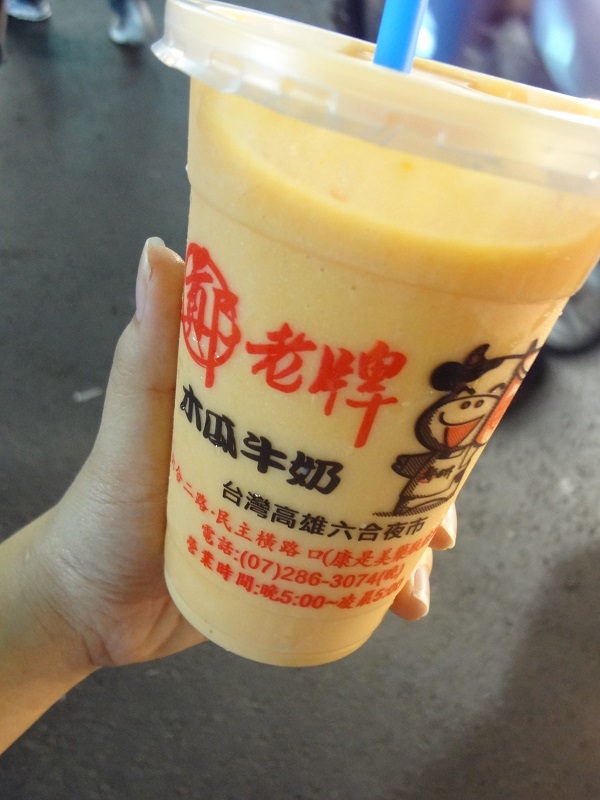 We were obviously attracted by the amount of signatures on their store board, so we had to give it a shot. The papaya milk was thick and flavourful, till the point that it starts getting a little cloying after a few mouthfuls. Even being a glutton family, we had difficulty finishing it! 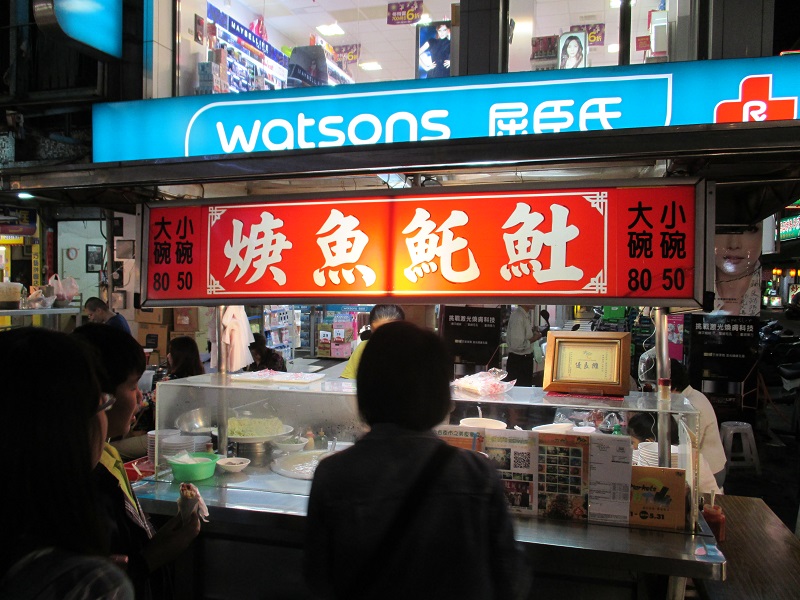 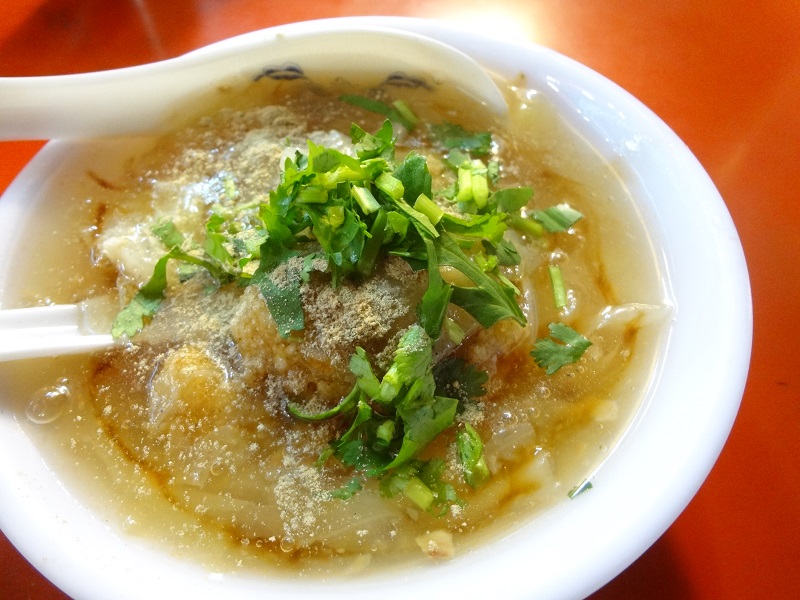 The fish soup that they sold was rather similar to those that you would have if you had shark fin soup. In the case of this stall, they replaced shark fins with fried fish meat instead. In case you’ve no idea how shark fin soup tastes like, the soup is slightly starchy and thick. You’ll then accompany the soup with vinegar or black pepper. Nothing fancy, you might want to give this a miss! 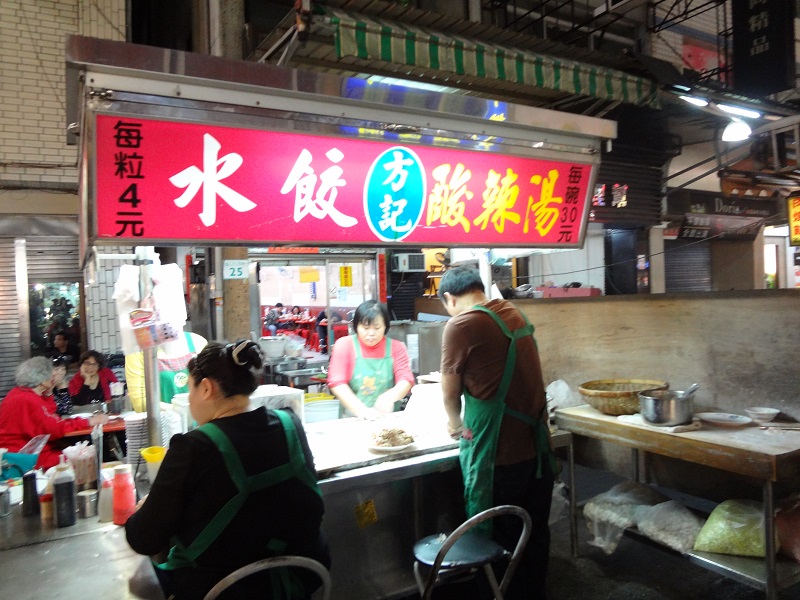 If you followed us on Instagram, you might have seen us post a video of a lady making dumplings. The dumplings that she was making were none other than方记’s! Judging from how skilful she looks, it was no surprise when the dumplings tasted so good. The skin was thin and the filling was absolutely fully packed with flavour. 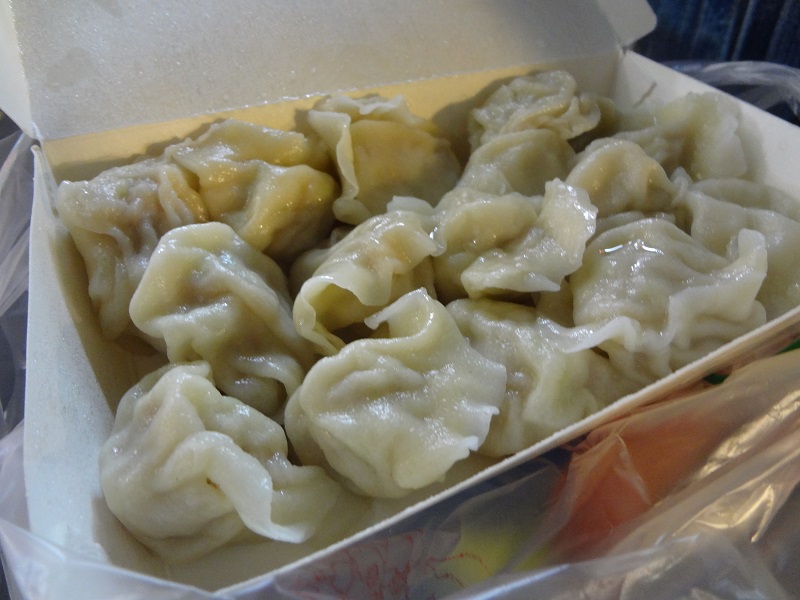 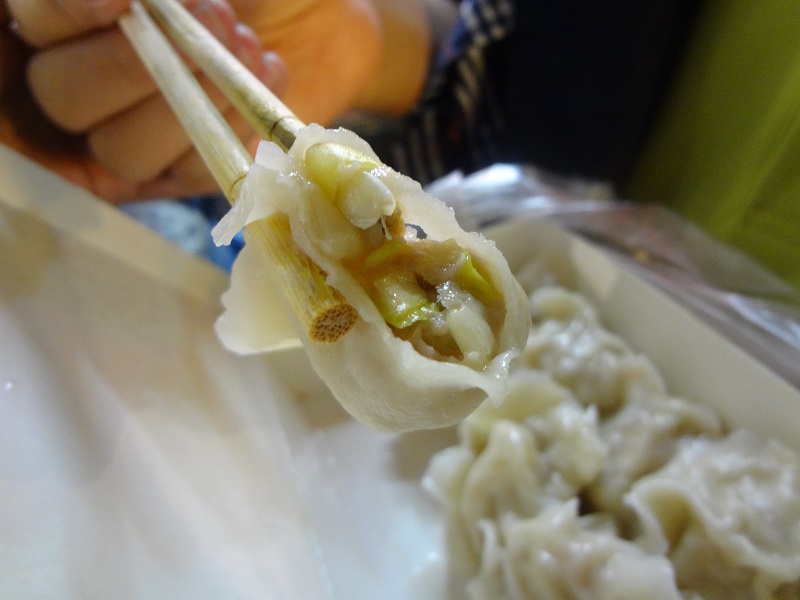 The Spicy and Sour Soup was rather disappointing though. It tasted nothing close to spicy or sour, it was merely slightly starchy. I guess in this area, the Taiwanese have a different preference as compared to us Singaporeans! Forgo the soup when you’re here, save your tummy space for the absolutely delicious dumplings! 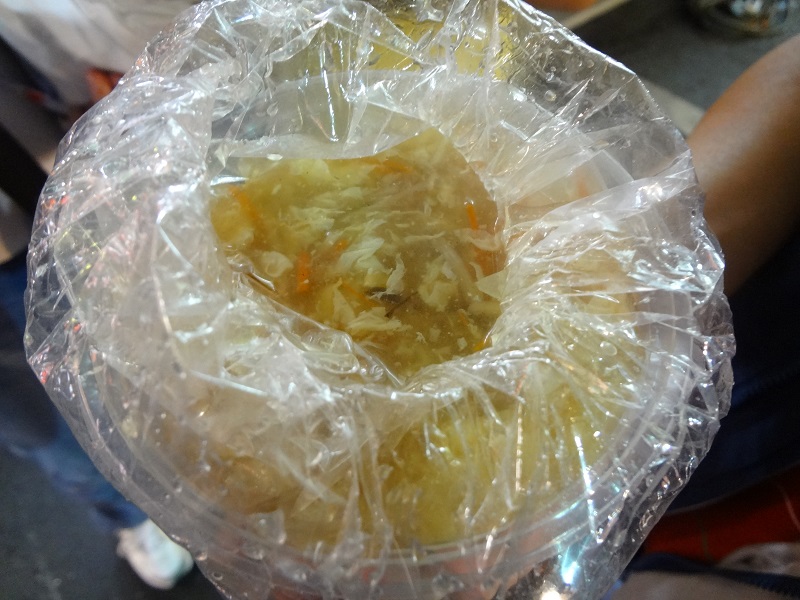 Service wise, the staffs weren’t exactly the friendliest person on earth, and we waited very long for the dumplings. 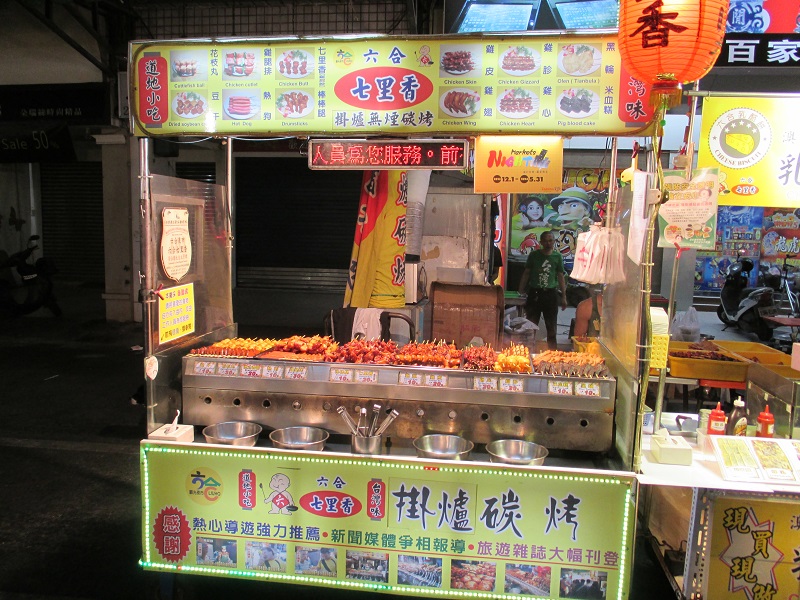 Once again, if you followed us on Instagram, you would have seen a video on a huge spread of barbecued meats, and yes, it is from七里香! We ordered the Chicken thigh meat, sausage and drumstick. While the video had a salivating effect, we thought that the meat on its own was average. The only thing that made it tasty was the chilli powder that we added. 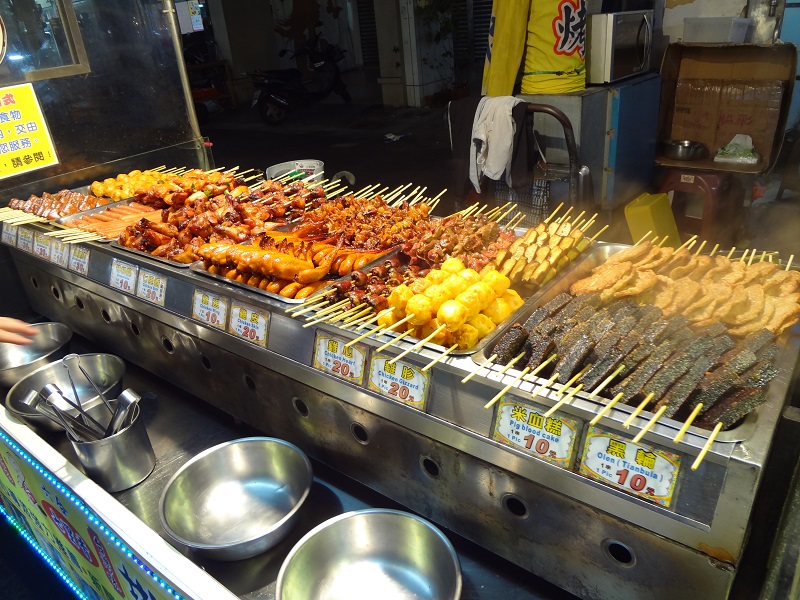 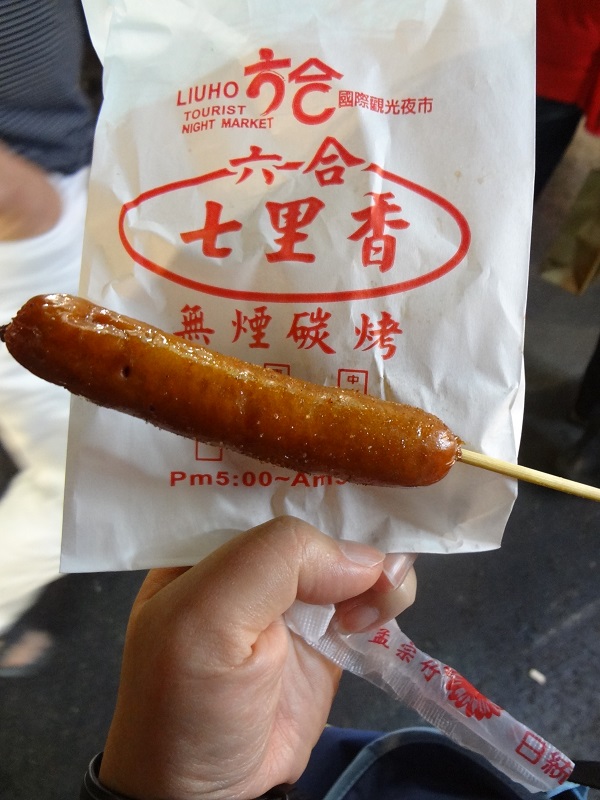 How it works is that you take a bowl and pick out the food that interests you, after which, you hand it over to the owner who will then mix it up with your preferred seasoning and then pass it to you. Because of that, (plus the rather chilly weather in Taiwan during the year end) the food was slightly cold. 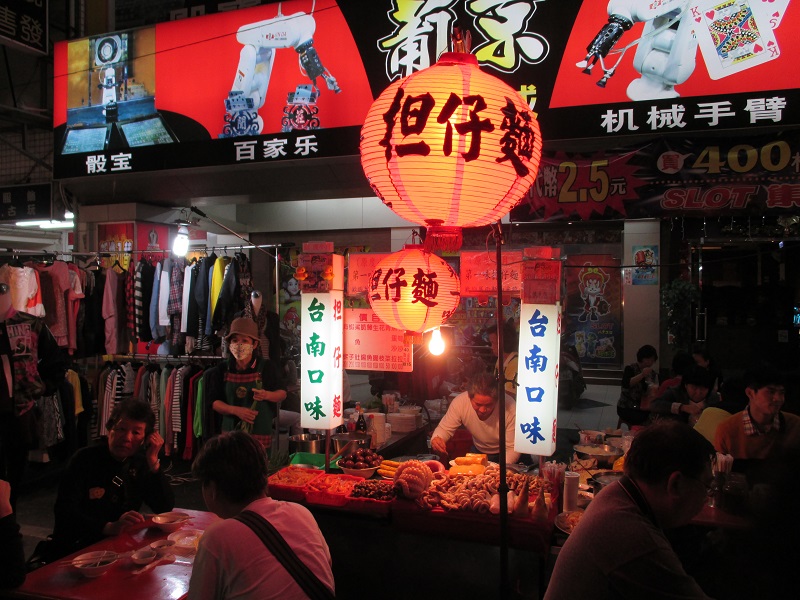 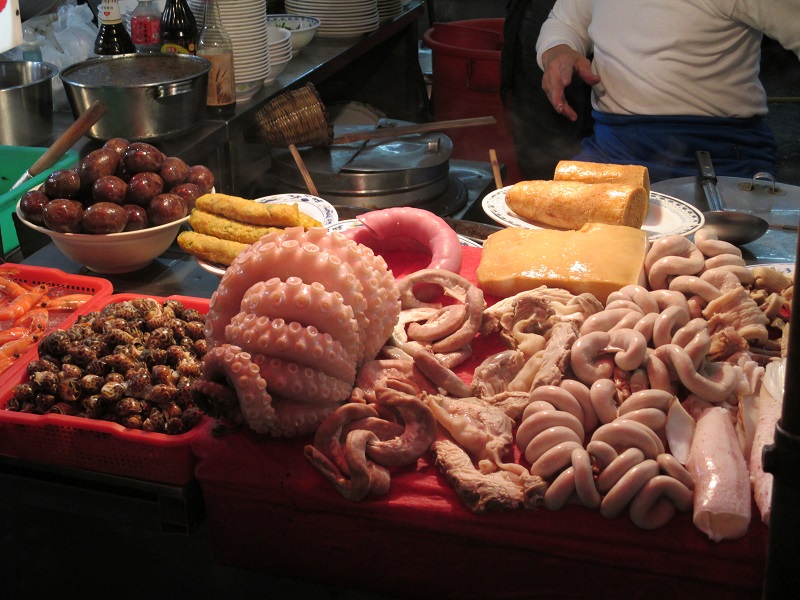 We’ve no idea why we don’t have this in Singapore when it tastes so good, or at least the one from this stall. It has got recommendations from television shows and the Taiwan tourism board (I think). It might seem like a simple bowl of noodles, but it really is delicious and at the same time heart-warming! It contains of a prawn like soup base, topped with some minced meat, soy sauce and bean sprouts. 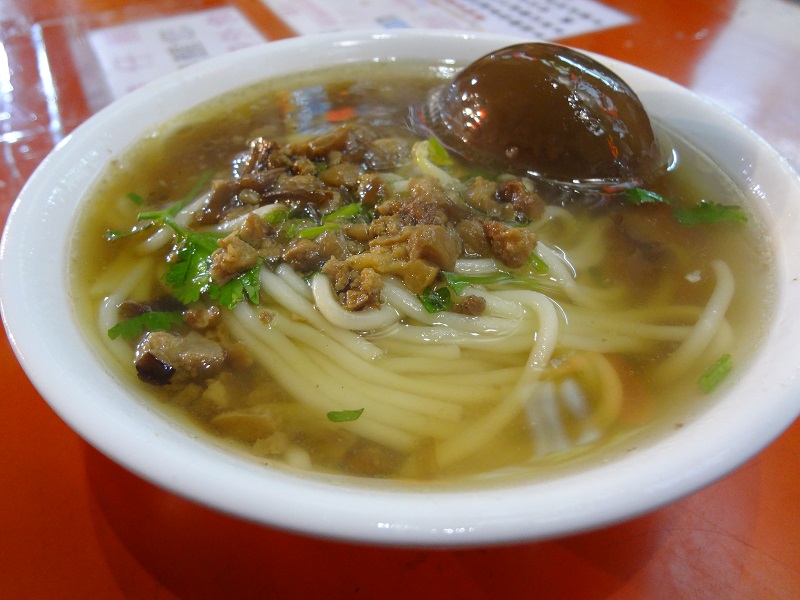 The egg that we had in the picture was an add on, but we didn’t regret it one bit! The egg was braised for so long, it soaked up all the essence of the sauce. (Absolutely splendid!!!) Being gluttons, it wasn’t a surprise we took away 2 eggs to munch back at the hotel. 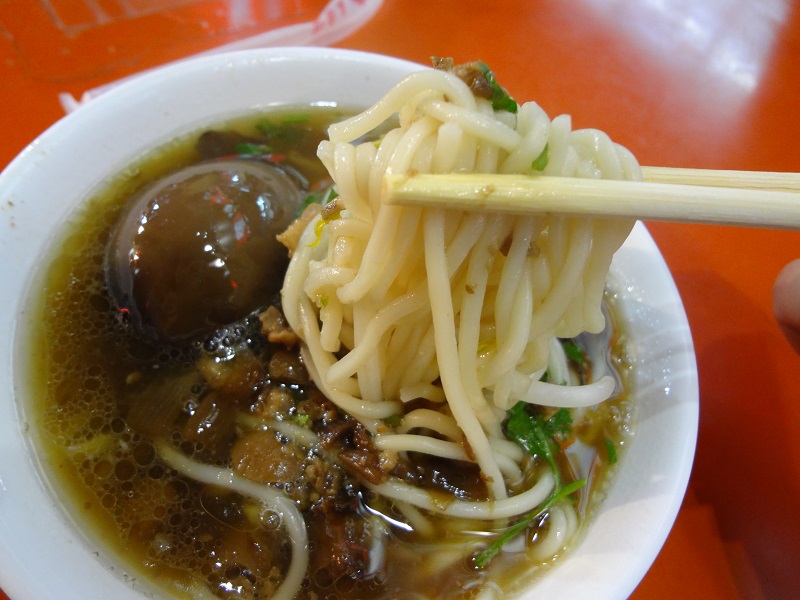 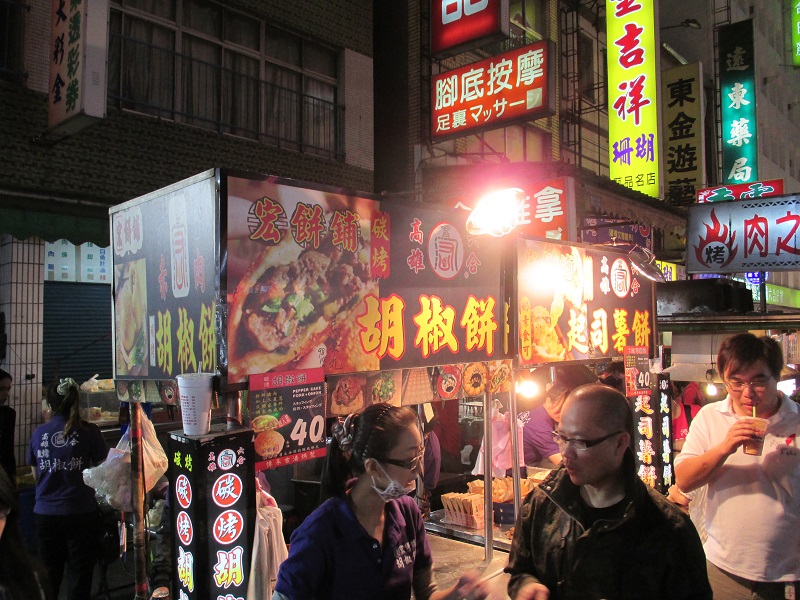 The direct translation from Chinese to English would have been Black Pepper Biscuits, but I suppose buns would be more accurate since it is made up of a soft pastry on the outside, filled with meat that’s flavoured with black pepper and some spring onions to go topped with some sesame seeds. 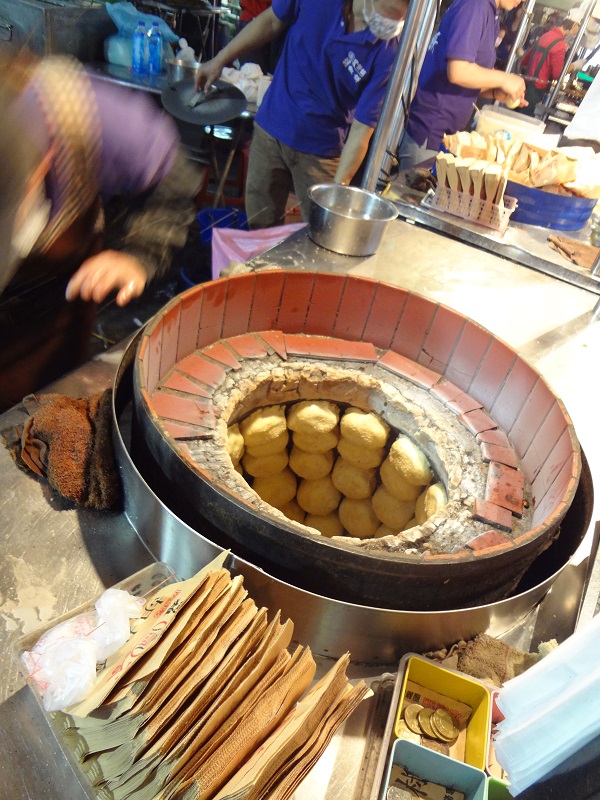 What really caught my eye wasn’t how tasty the food would be, but how the buns were made. Turns out, the buns were baked in this stone/brick oven where the buns are not placed on trays in it, but rather stuck along the walls of the oven. They are then covered and left to bake. The taste of this stall’s black pepper bun wasn’t very fancy, the taste of the black pepper wasn’t very strong, would have been better off with some normal buns. 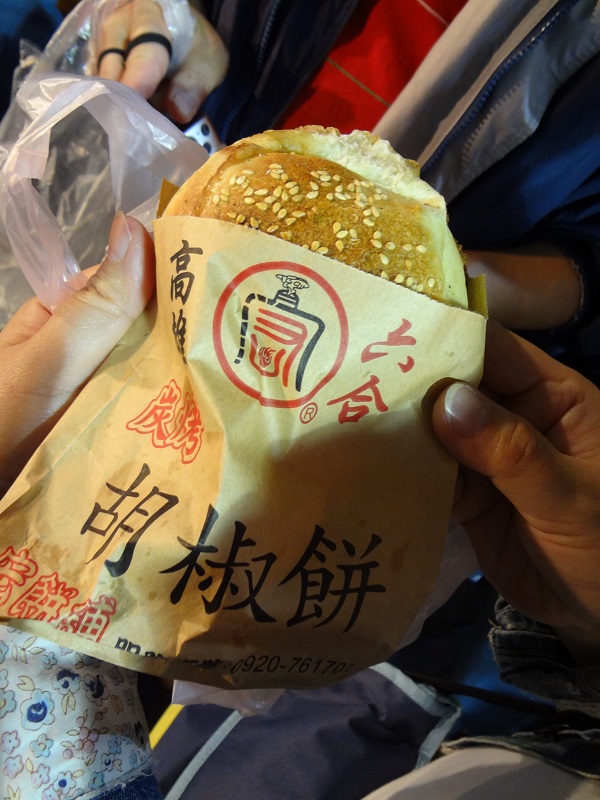 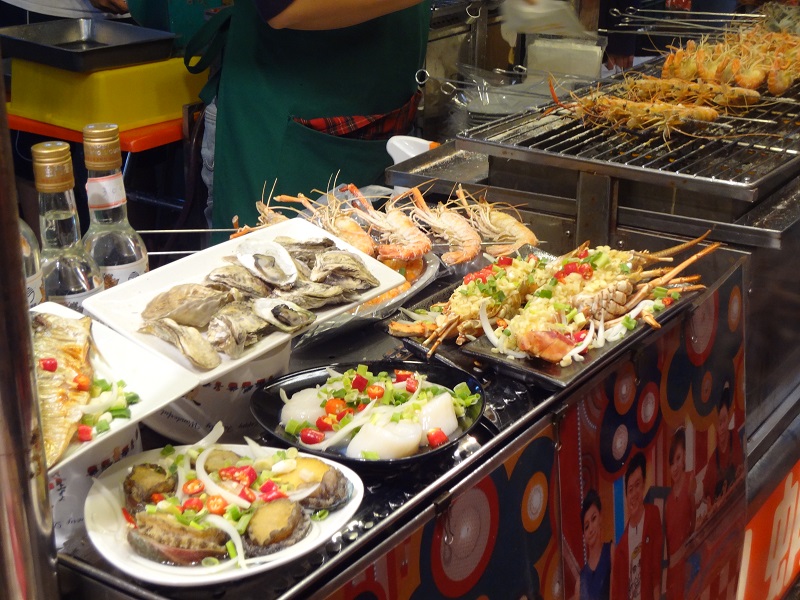 We were drawn by how the prawns were still alive and kicking while being stuck on the grill. Prawns can’t get any fresher than this! We ordered a stick which contained 5 prawns, and we were so glad we bought this! The meat was extremely soft and tender, with a little bit of natural sweetness from the prawns, huge thumbs up for this one!