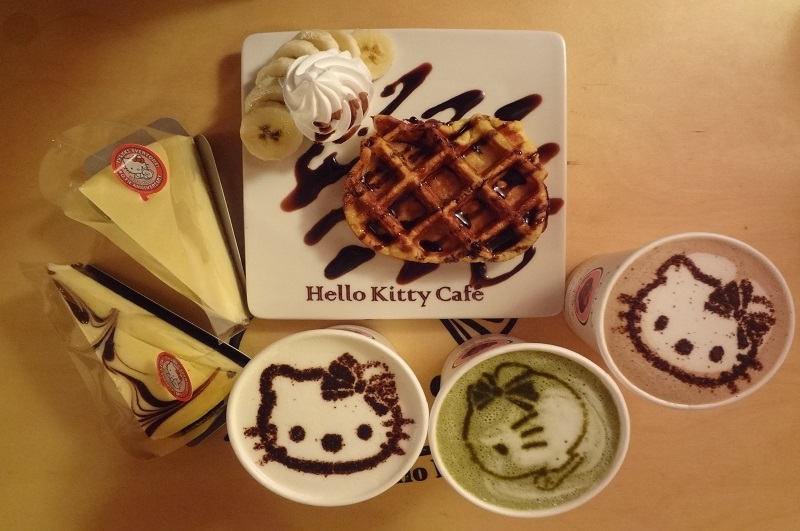 When you go overseas and you see something familiar, especially after knowing that this is the country of origin, you just have to go in and give it a try. I was excited to know that Paris Baguette littered the streets; one was guaranteed a few minutes’ walk away! The one that was near my hotel was kind of small so they would not have much of a variety as compared to the outlets in Singapore but it’s still pretty decent. 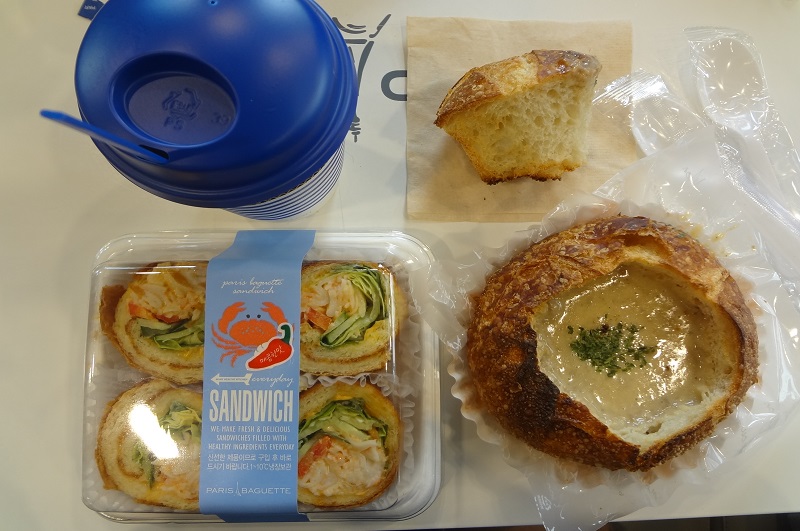 A must order that I think they do not have in Singapore are these croissant rolls with spicy crab mayo filling paired with cucumbers and lettuce. I’m craving for them as I’m writing this at this very moment! Their breads are all soft and fluffy; they did not fail to impress either. That said, their drinks are all on the sweet side so you might want to request for it to be less sweet: 덜 달콤한 deol dalkomhan (thank google translate for that)

Once again, there were streets and streets and even more streets filled with plenty of shops and cafes and food. It was also along this stretch of streets did we actually spot a café that says “Kopitiam” which claimed to offer Singaporean food. Obviously I wasn’t going to waste my tummy space on food I can readily get in Singapore, but for those who are craving something local, you might want to head in and take a look!

(P.S for all you females out there that has a huge love for bags, there are more than a couple of bag shops that sells all bags at 10,000 KRW which is currently approximately 12 SGD littered along these streets, so do keep a lookout!) 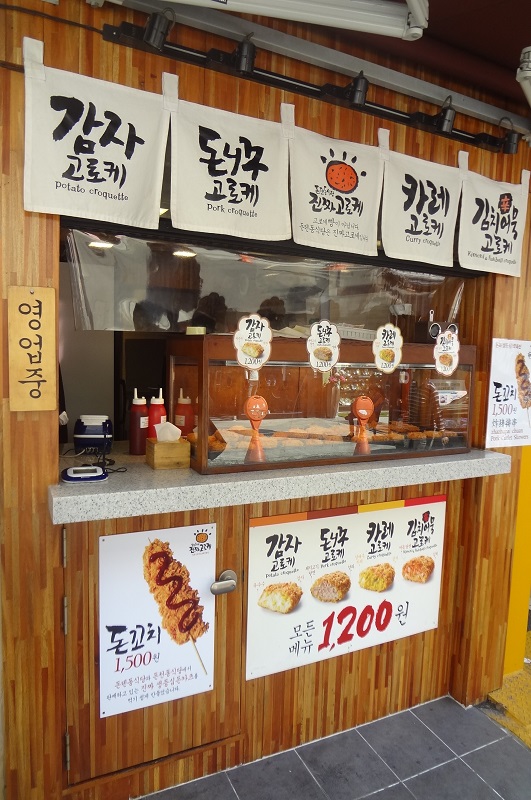 While shopping, I chanced upon this croquette shop that sells four types of croquette (potato, pork, curry, kimchi and fishball), each for only 1,200 KRW. 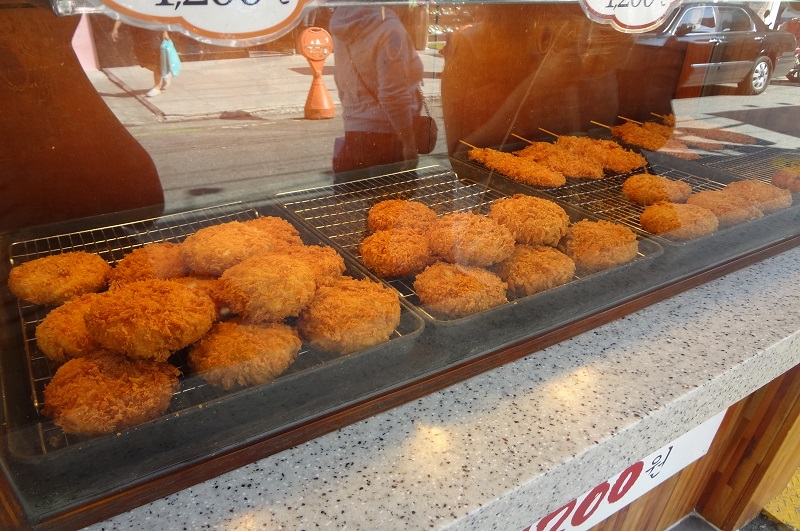 When I saw kimchi and fishball, I knew I had to order that, how often do you get to come across kimchi and fishball croquettes?!?! Probably the best decision I made that day, the kimchi was appetising, crunchy with the right amount of spiciness and tanginess. For those that do not take spicy food, the pork croquette was a good alternative; it tasted rather similar to black pepper buns. 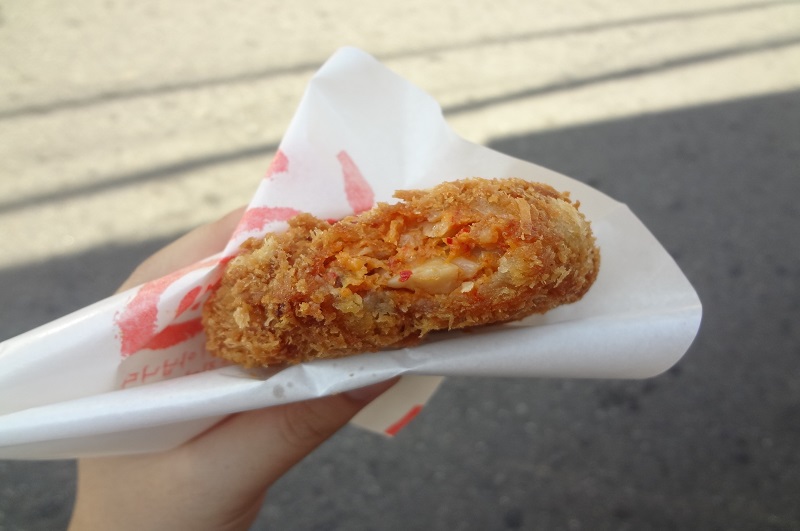 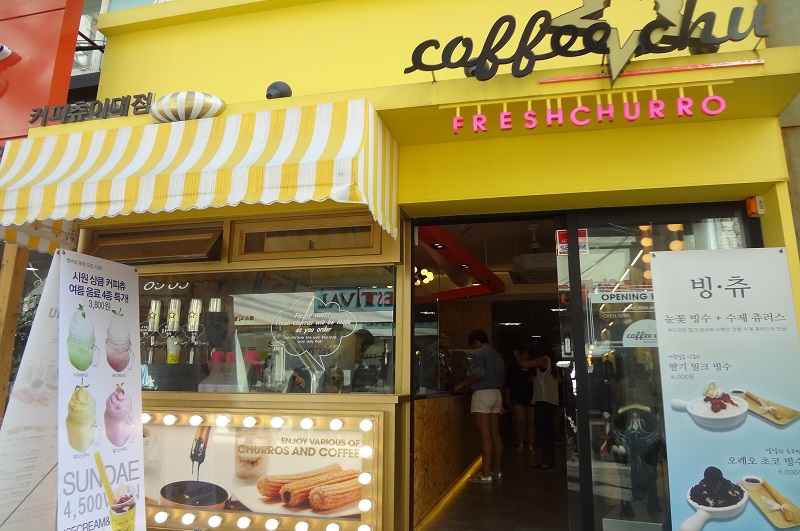 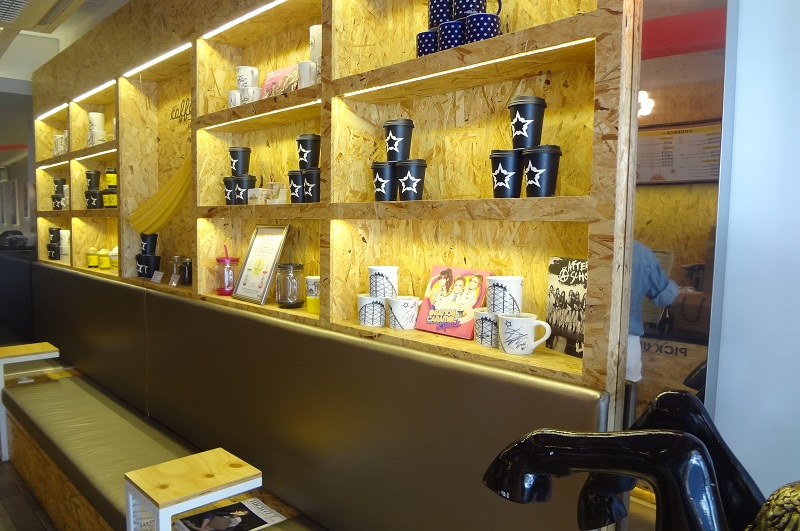 For tea, we decided to take a break at Coffee Chu which from its name you could most probably guess what it offers… that’s right, coffee and churros! Apart from its bright storefront that caught our eye, they also had a glass display which showcases how the churros are made fresh upon order. If that isn’t attractive enough, I don’t know what is. 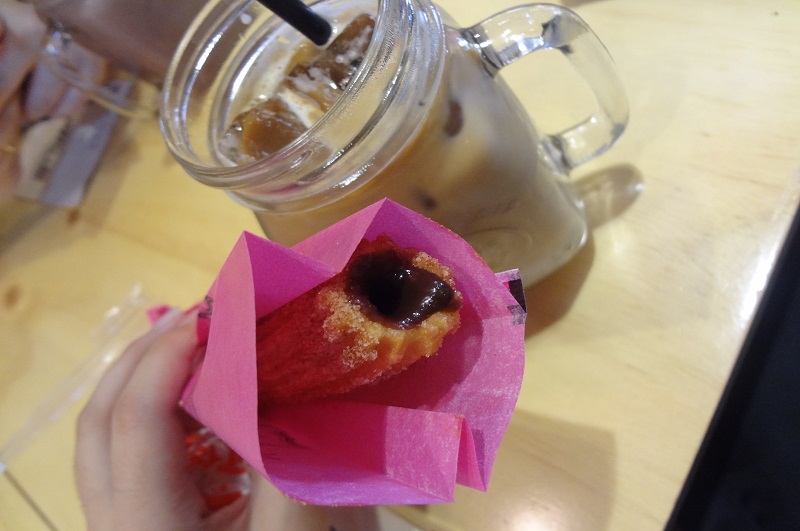 The very first time I had a bite of churros was when I was in USS and I thought the churros were a tad plain? Since then I have stayed away from it, but at Coffee Chu, they have stuffed churros! I went with their Nutty Choco which was one of their best sellers, and another hot favourite among my friends was the Mud Shower which was a plain churro with a 57% cocoa chocolate dipping sauce. Another plus point of their churros other than the fact that they taste good was that they were not oily – minimum guilt! 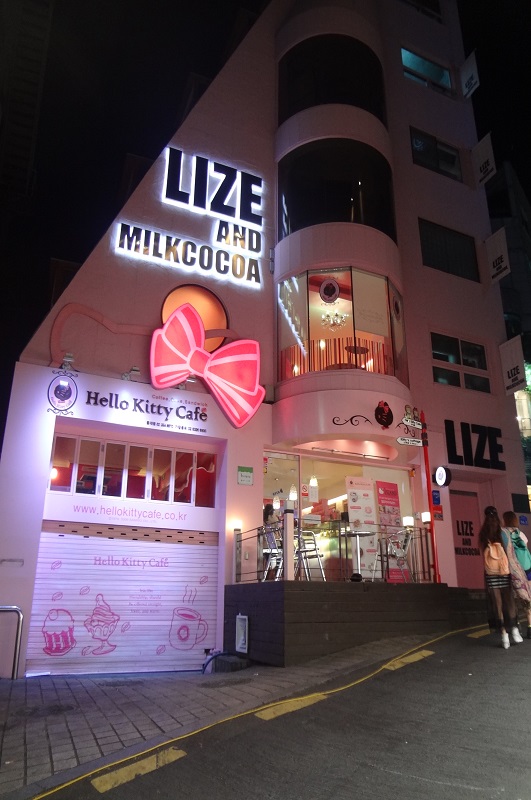 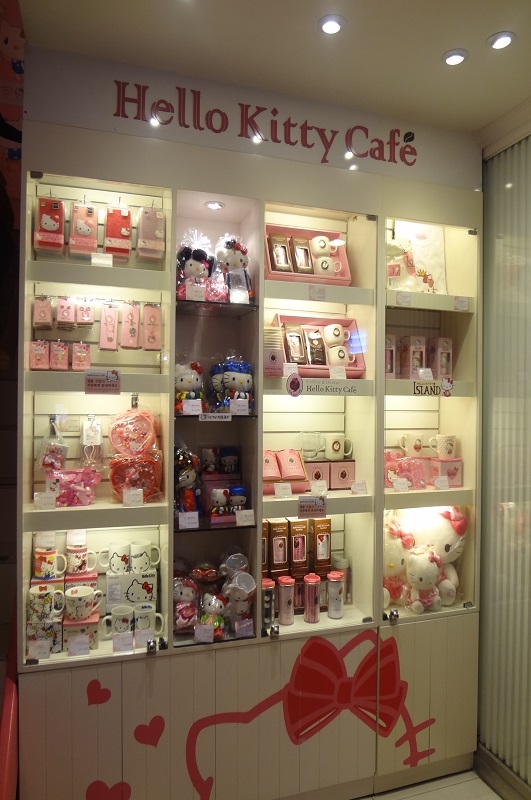 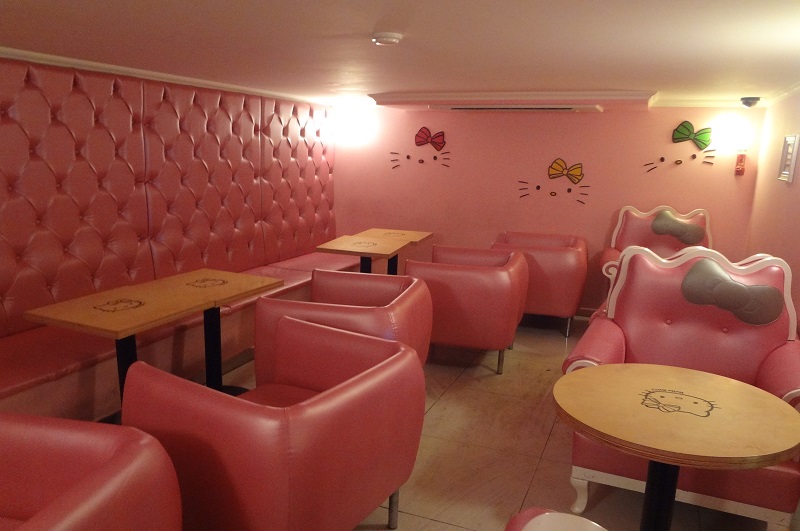 For its food, the waffles were nothing fantastic with the best part of it being in the Hello Kitty shape. The cheese cake however was rich and creamy, just like the chocolate tart. 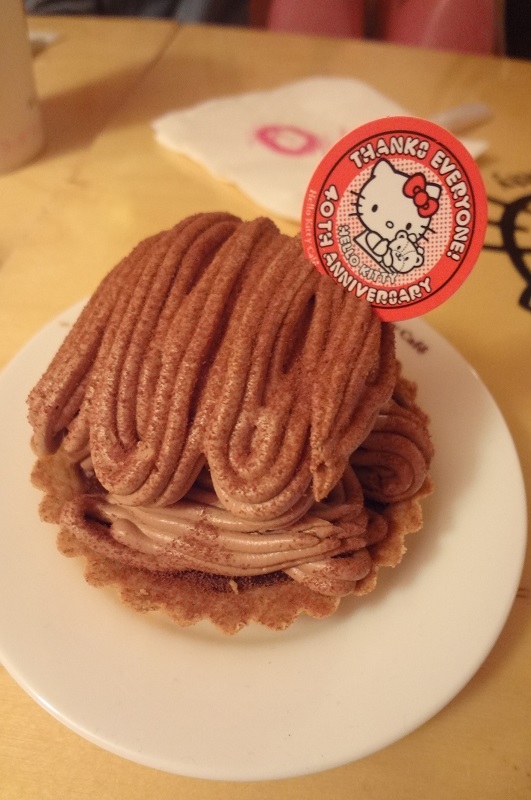 After having desserts for two meals straight, we decided we had to have something savoury; and what better dish to have than kimchi gimbap? (I cannot emphasise how much love I have for this road side stalls) Sweetness from the egg, saltiness and spiciness from the kimchi, sourness from the kimchi and rice, it was a perfect melody of flavours that tingled our tastebuds! 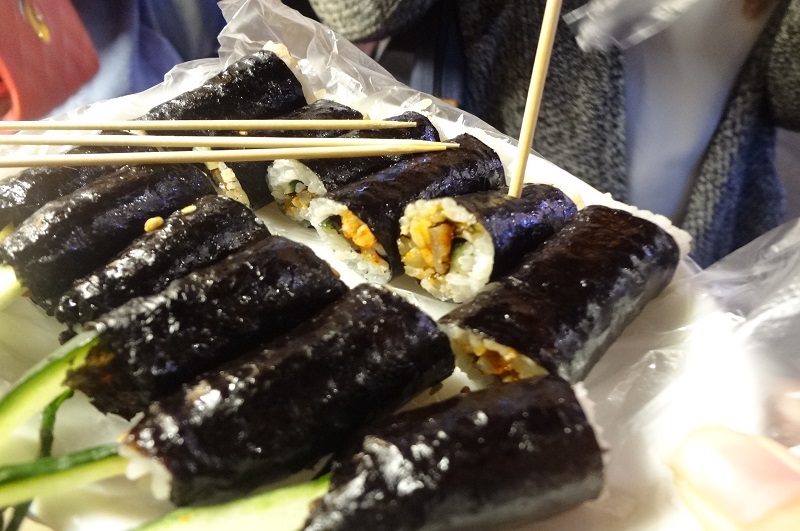