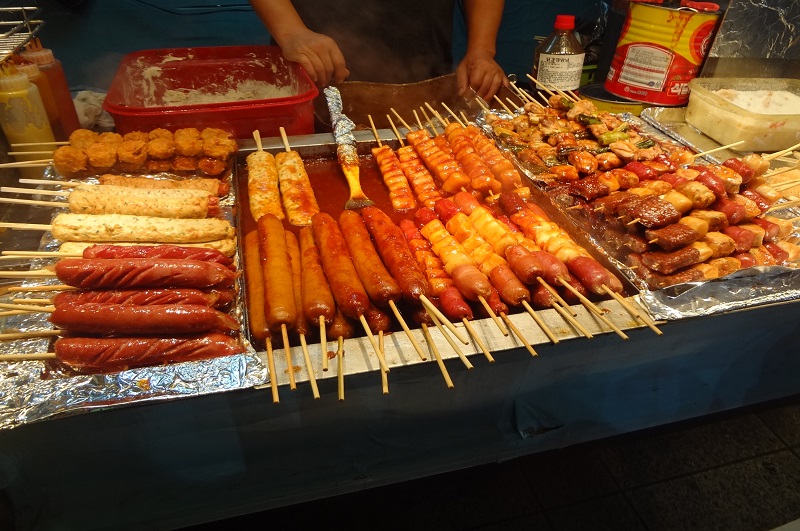 I headed to the Seoul Station as I wanted to get some Korea snacks to bring back home from the ginormous Lotte mart that resembled the Giant that we have at Tampines.

Lotte mart other than its spacious walkways between shelves is the fact that there are plenty of food samples! (Which was the main reason why I bought a packet of tteokbokki and a packet of chewy cuttlefish and crispy cuttlefish) I regret not buying back more boxes of MarketO Real Cheese Chips which is hands down one of the best chips I’ve ever eaten in a while. 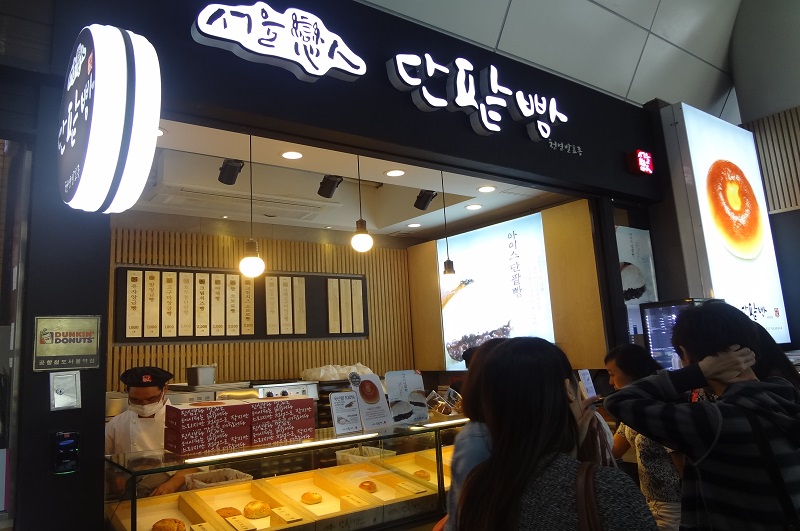 Before heading to Lotte mart, I chanced upon this small little shop hidden in a corner of Seoul Station (near the money changer) which sells buns and their signature is the chilled red bean ice cream bun. 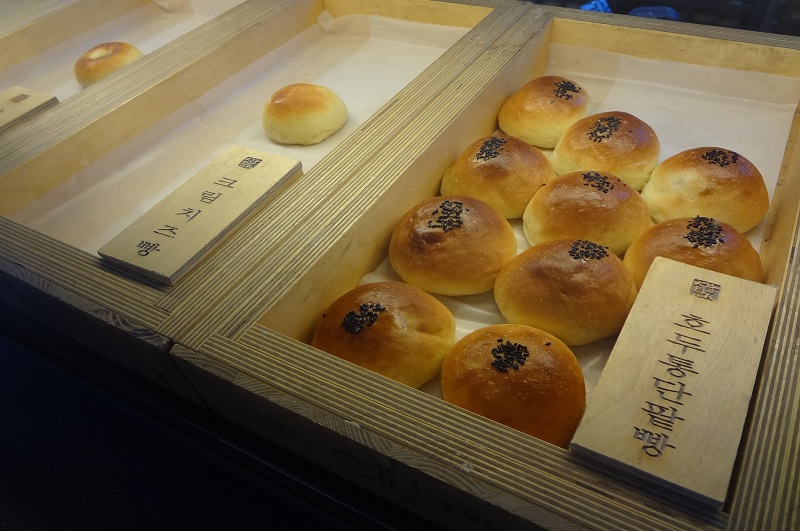 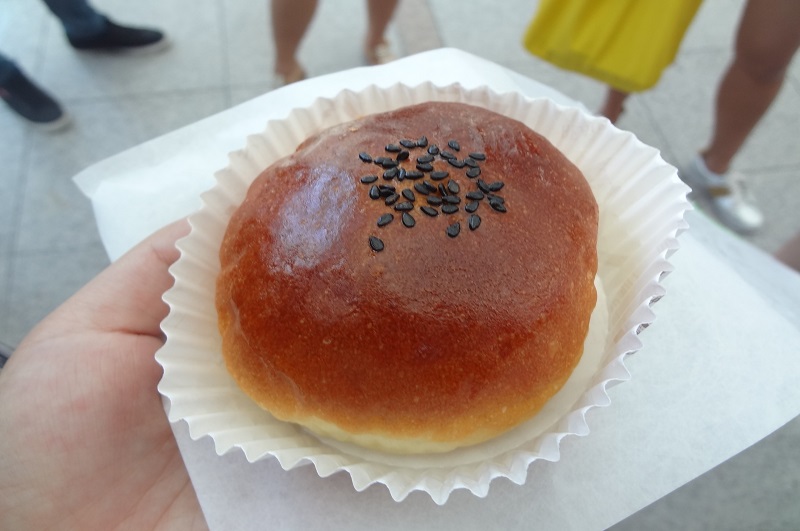 I was supposed to wait for about 10 minutes or so for the ice cream to thaw so it melts and blends well with the red bean paste but I was hungry and impatient so this is how it looks like when the ice cream is still pretty solid. 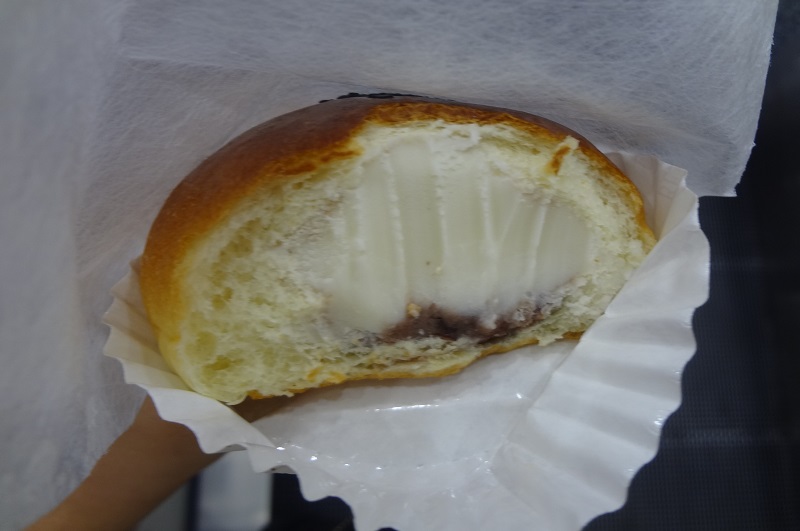 That said, even though the ice cream was kind of hard to bite and munch on, the ice cream was so rich and smooth, I enjoyed every single bite. Could you imagine how heavenly it must have tasted if I was a bit more patient? The bun was also soft – all the components just came very well together and created fireworks in my mouth. Must try!

Home to stalls after stalls of vendors selling traditional food, this place is a must go if you’re in Seoul. There are tons of foods available like their tteokbokki, Sundae (not to be mistaken as ice cream, it is actually pig’s intestines stuffed with noodles and pork blood), kimbap or gimbap (which is Korean’s version of sushi), and Korean tempura just to name a few.

I wasn’t feeling so adventurous as to order a Sundae but I did have their Korean tempura which was fried on the spot by the lady boss. 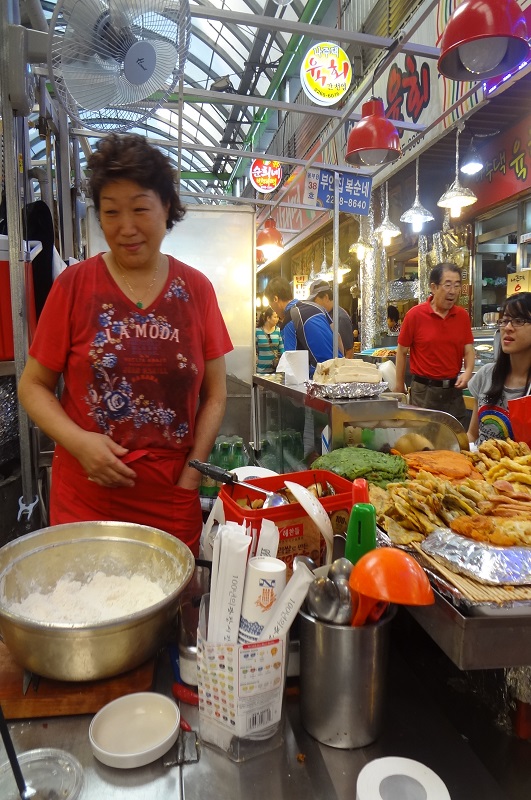 There were a couple of vegetables, their kimchi pancake, bindaetteok (otherwise known as mung bean pancake), and this unidentifiable black chewy piece that tastes a little like mushroom but we guessed for it to be cow’s stomach. 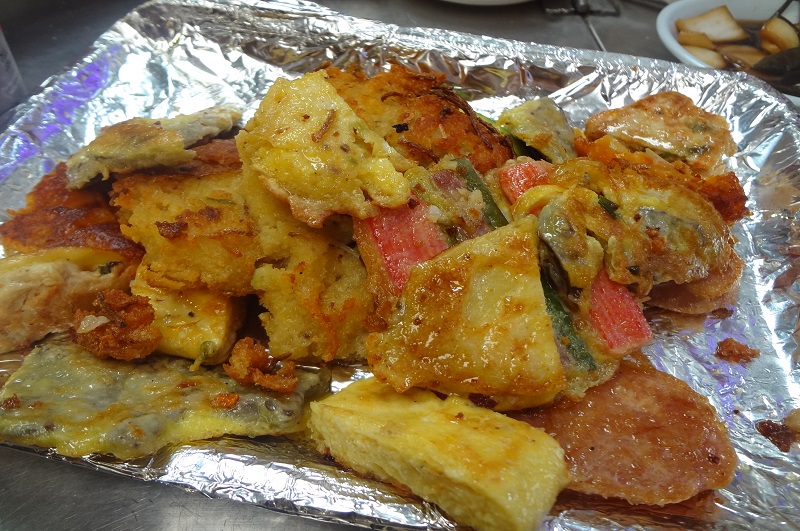 As you can see from this picture it is very oily, but it is also very heartening too; eating this in the middle of the market was surely an energy boost! 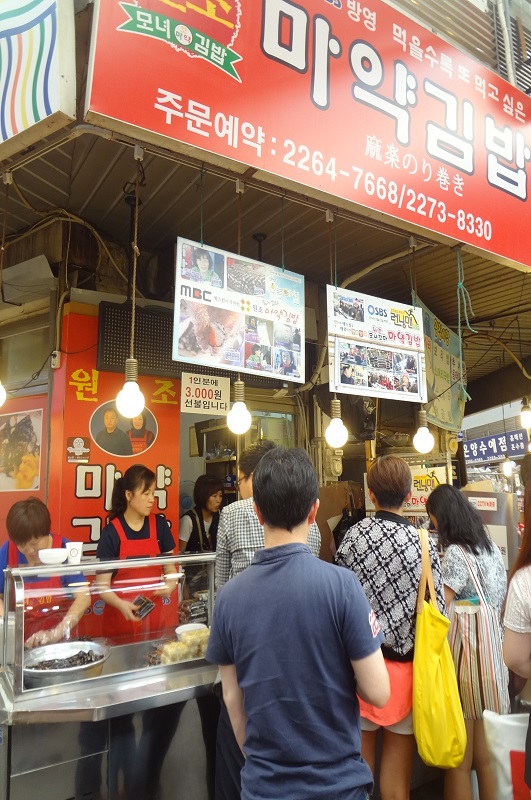 The Kimbap stall as seen on the picture here was featured on the famous Korean reality series – the running man. Needless to say there was a crowd but what really amazed me was how fast they were rolling and making the Kimbap one after another like they were machines. This wasn’t the best Kimbap we had despite its popularity, read on for the real deal! 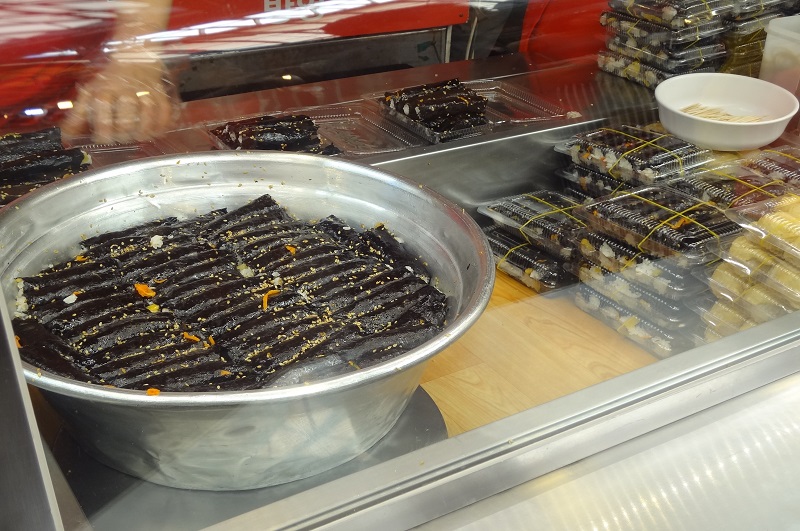 When one goes to Hongdae, other than the endless amount of shops for you to literally shop till you drop. Nice food was everywhere. 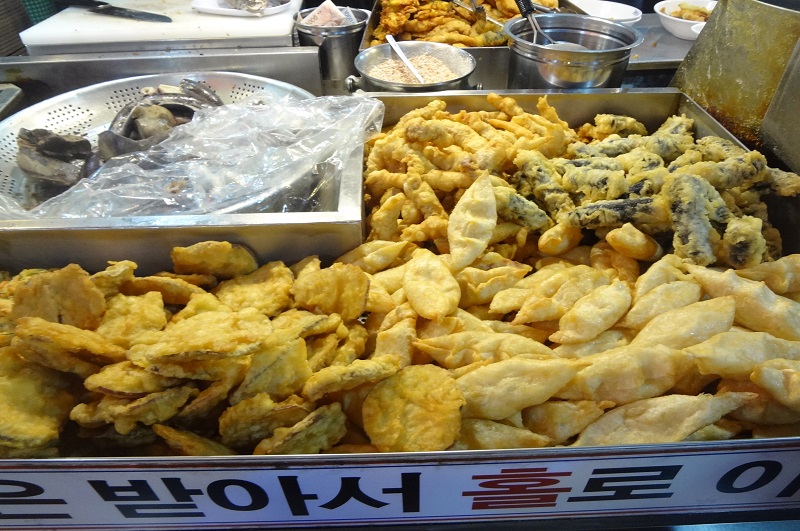 Tthe one place that you cannot give a miss is definitely this stall. 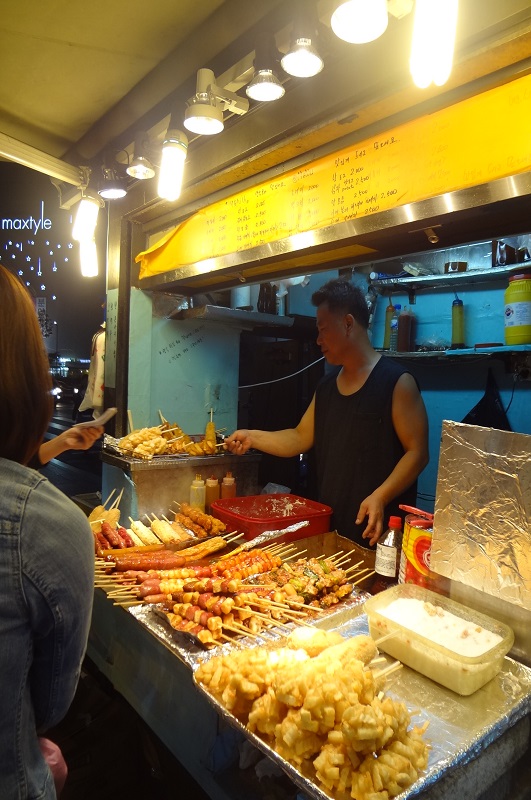 What’s special about this stall is that it was started out by gangsters that left the gang and decided to turn over a new leaf and sold street food instead to make a decent living; and that is not their only selling point. Their tteokbokki, Eomuk Guk (Korean fish cake soup) and Kimbap were on point. 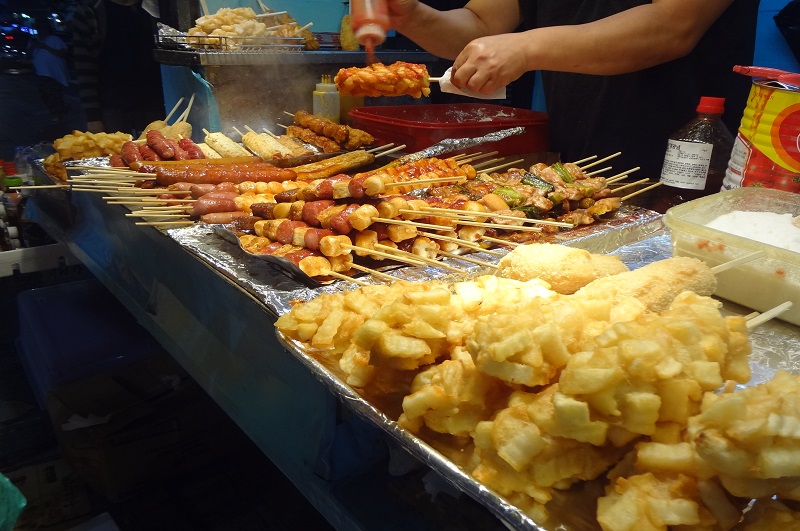 This was by far one of the best kimbap I had in Korea which had generous fillings and was absolutely delectable. Be sure to drop by and give them your support for you won’t regret it!

For dessert, we had the soft con cup (soft serve ice cream) which was extremely tall. You are given the option of plain vanilla, chocolate or a mixture of both. 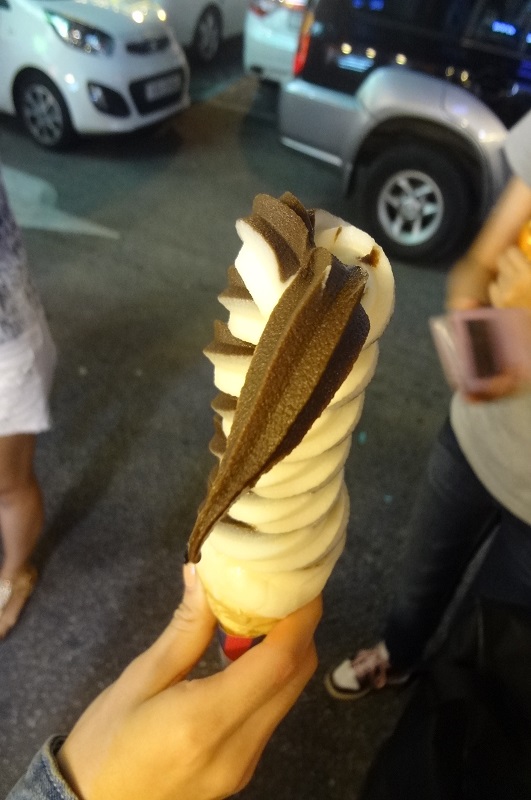 We chose a mixture of both and kind of regretted as the plain vanilla was just plain sweet – the chocolate was clearly the star. In case you’re wondering what kind of texture the ice cream was like, it was the icy kind that melts instantly, making it the perfect refreshment.