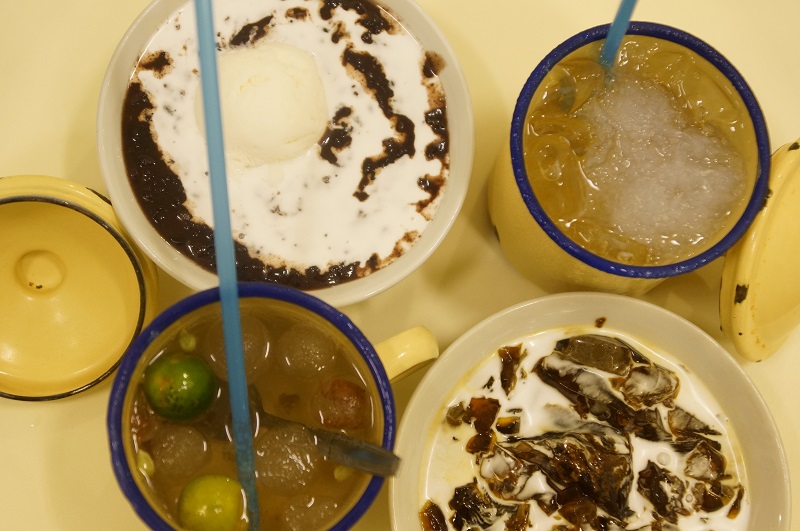 If you’ve been a reader of this blog, you should know by now that we love anything old school. So when we found out that Sinpopo was a concept restaurant recreating the olden days, we were more than excited to check it out! The first time we walked in (we went there twice, first for the desserts and second time for the mains and more desserts to have a larger coverage), there was old 60s soothing music playing in the background that wasn’t very intrusive; however the second time we went back, the music was pretty overwhelming – 60s Chinese pop rock songs that were really loud with a heavy beat – that we didn’t enjoy. 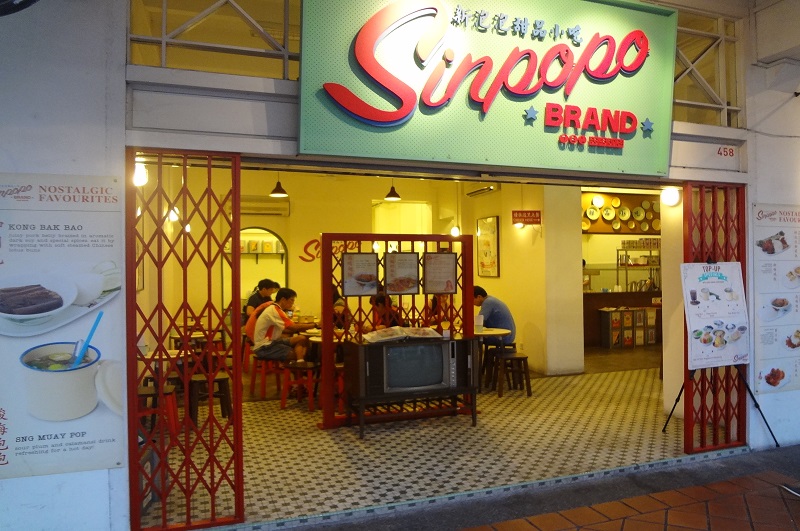 An old CRT television was placed right at the entrance, the red painted iron sliding gate reminiscent of the old shop houses in some of the old estates, the shop is decorated with old posters featuring those 60s’ celebrities, vintage wooden furniture, the biscuit tins, black and white mosaic flooring to evoke a 1960s atmosphere. 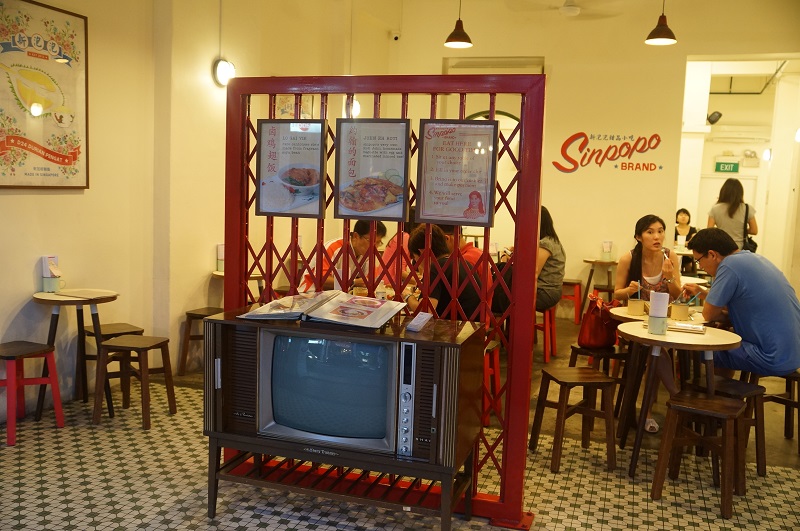 That’s definitely not my generation but I can sense that my parents have a strong affection for the setting – a good dose of nostalgia rarely found in modernized Singapore. Welcome to the kopitiam – Sinpopo. 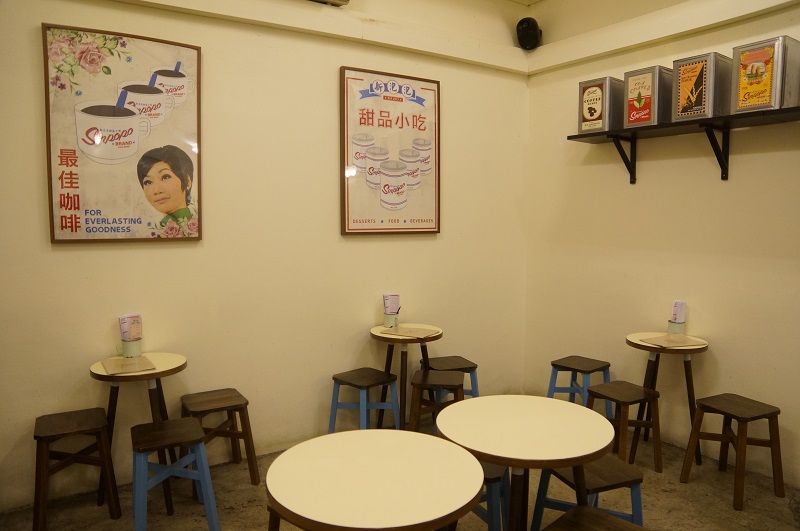 Another thing worth mentioning is that even though the café is based in the 60s, it is managed by a youthful crew. 60’s managed by the 90’s, interesting! 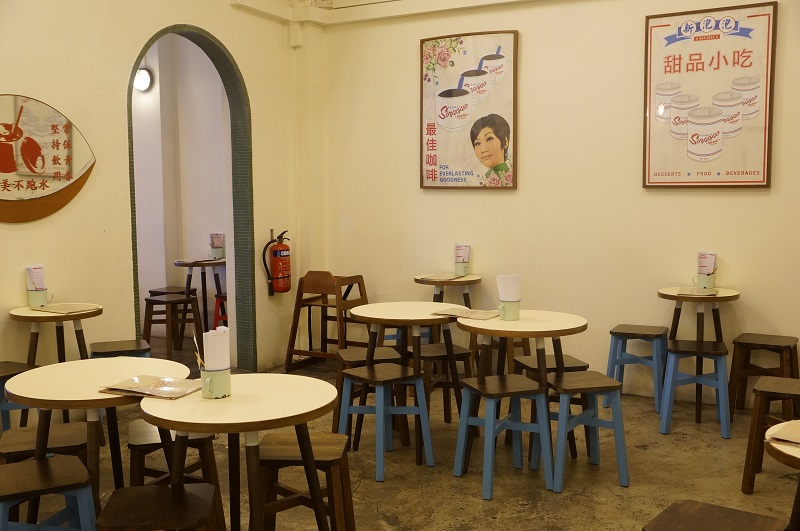 The dish was a little inconsistent as certain rolls were harder than the others. It also wasn’t chewy enough, with it breaking down a little too easily (we enjoy munching when eating chee cheong fun). The chilli sauce used was the typical bottled kind rather than sambal chilli or homemade chilli which didn’t blend well with the chee cheong fun. 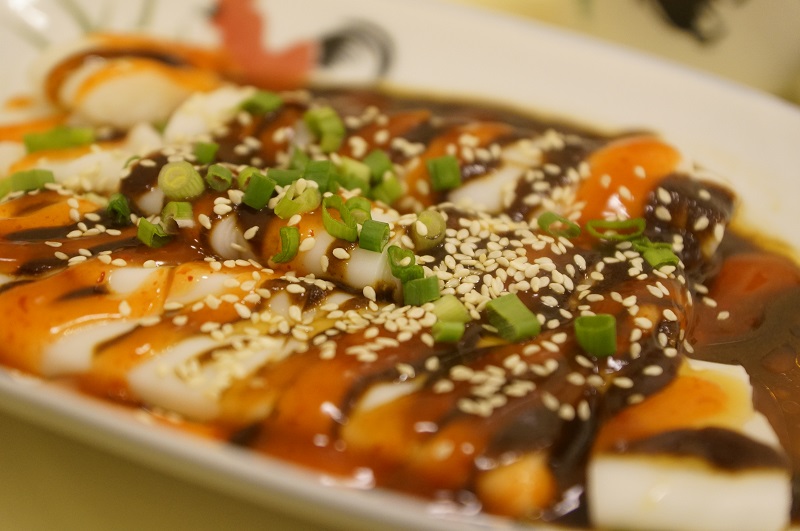 The texture and taste of the beehoon was fine, as it was not too dry or soggy. The chicken was a little too salty, with reasonable texture though. 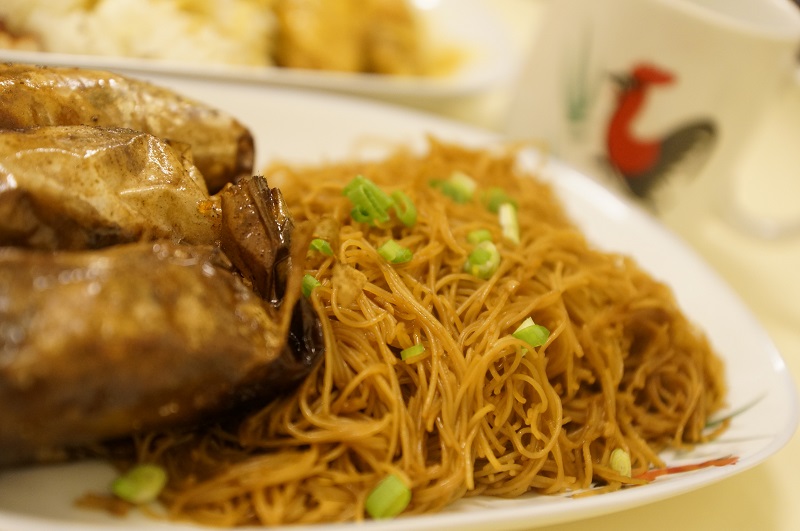 The level of saltiness like previous dishes were fine but it was lacking in flavour. The curry didn’t have the unique curry fragrance and it was way too diluted for our liking. The pork belly slices were also extremely tough, my brother complained that he felt as if his tooth was going to drop. The chicken was tender though. 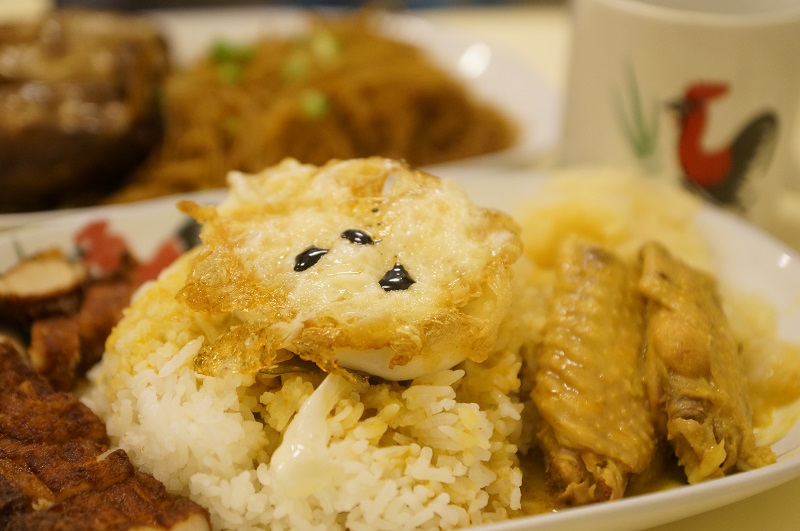 The Gula Melaka was infused within the jelly, topped with coconut milk, it was a tad too sweet for our taste buds! My father and brother said that it was too soft in a way that they didn’t like it although my mum and I were fine with it. 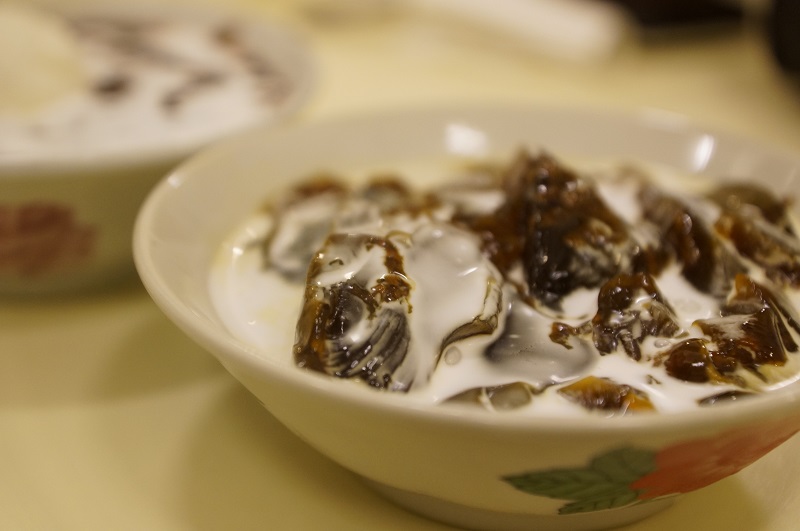 The black beans were a bit too hard and the pulut Hitam was thicker than normal. It’ll get a little cloying after a few mouthfuls! The coconut ice cream tasted fine with the pulut hitam but the hardness of the black beans really bothered us. This was too sweet for us too. 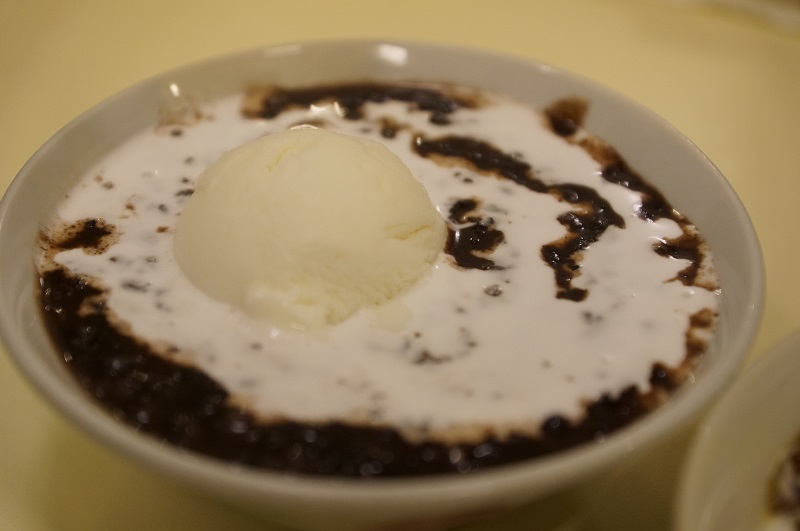 My parents’ eyes brightened up when they saw the fake bird’s nest, served with a metal mug just like the old times according to my dad, as it brought back memories from 40 over years ago as they used to make it themselves in the past using agar agar. It wasn’t very sweet and there is a lingering pandan flavour after every mouthful; retaining the flavours of the past. 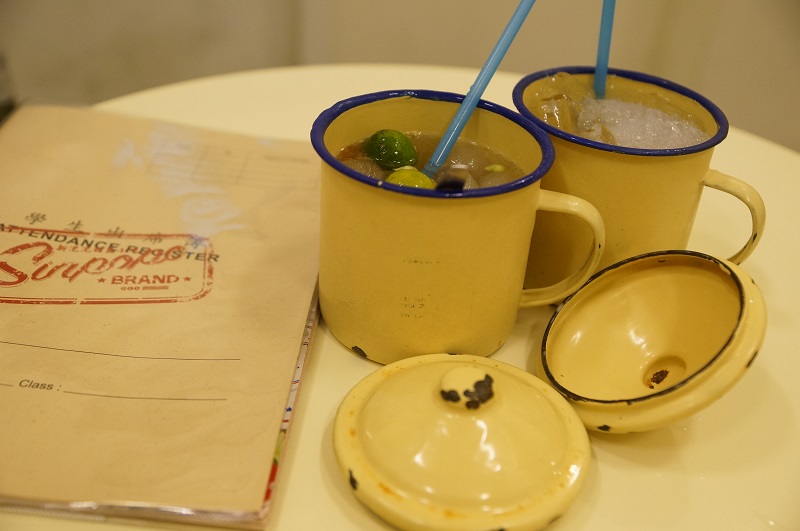 My father was surprised when he took a sip of this drink as he was expecting it to be just normal like juice. Instead, there was a modern twist as sprite/7-up was used instead. Very refreshing!

The jelly, yam and sweet potato chunks were way too huge and hard. There could’ve been additional sugar seasoning to make the pieces slightly sweeter. The saltiness of the coconut base was much more overpowering than its sweetness. 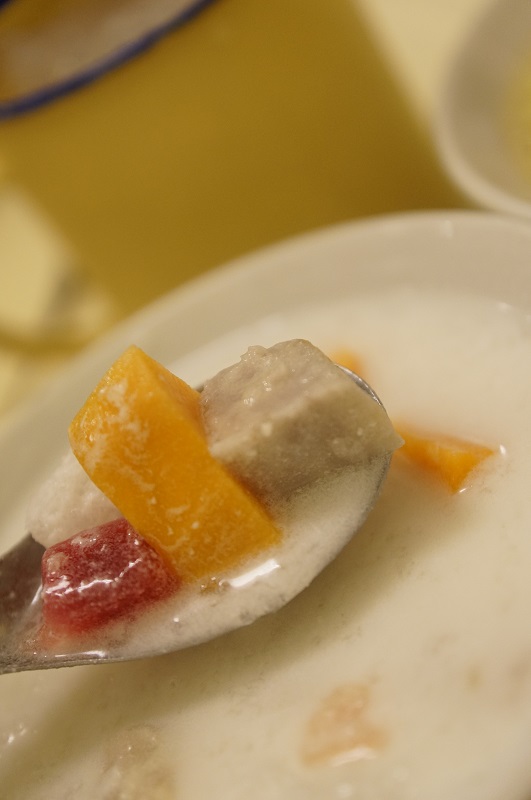 While my mum and I thought the texture of the tau suan was fine, my father and my little bro (the toothless guys) said they would like it to be softer since it’s slightly grainier now. The sweetness was alright although it could’ve been a little more fragrant with a tinge of pandan. 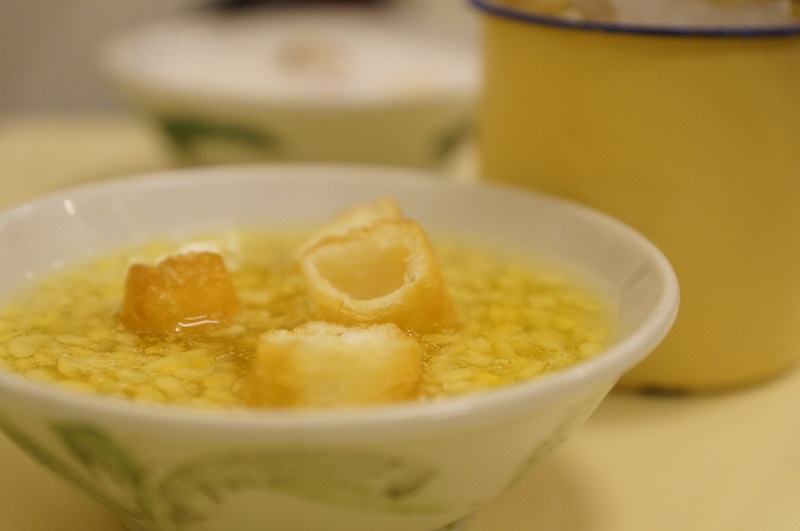 Maybe because it’s managed by youngsters, there wasn’t nostalgia in every mouthful as my parents had hoped. For me and my didi, we too can’t fully appreciate the 60s’ food and the environment, and likewise can’t completely comprehend those stories told by my parents about the old times. Perhaps we are still young, maybe there will be a time when I bring my own children here, I will be able to better grasp of the sentiment felt by my parents. 40 years later?