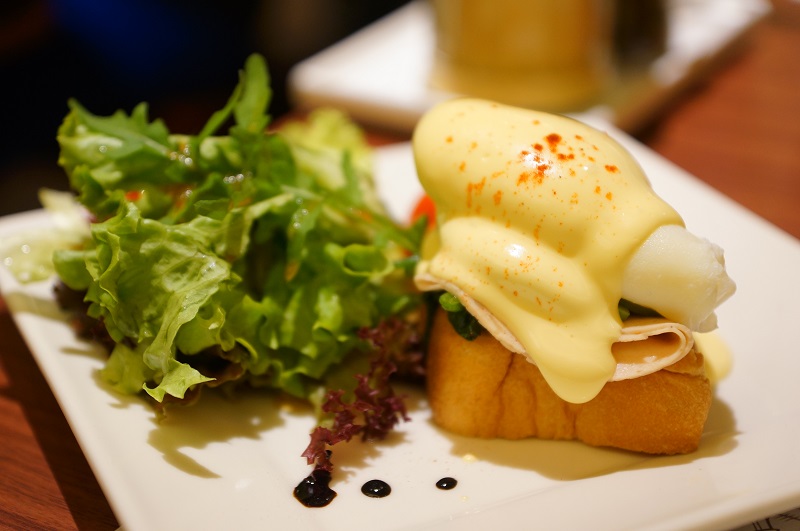 It’s bigger than ever! Shokutsu Ten is now back at Jurong Point almost doubling in size as compared to its previous food street as it now occupies 17,000 square feet, with a new theme of Tokyo and Osaka. For those that have not been to Shokutsu Ten, it houses nine different Japanese restaurants including the famous Men-ichi Ramen, Ichiban Boshi and Wadori. 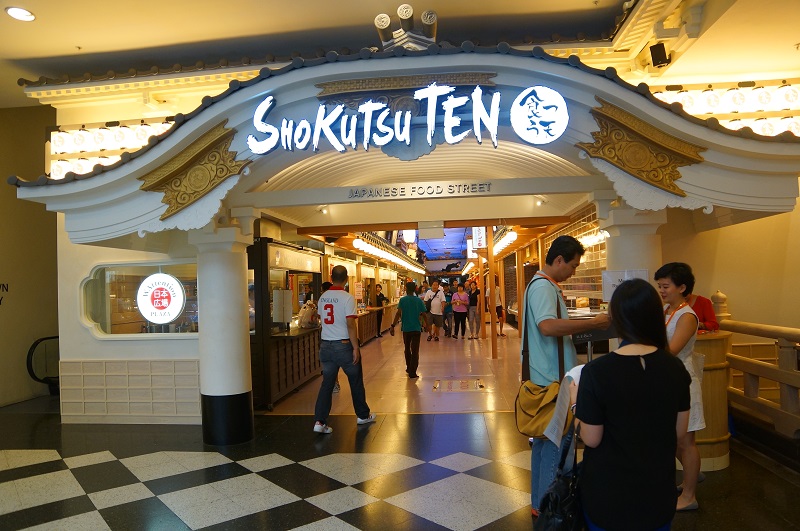 If you’re familiar with the Japanese culture and history, you would also come to realise that the grand entrance to Shokutsu Ten was actually inspired by the Kabuki theatre in Tokyo – not surprising since this entire space was designed by Japanese interior designers. The second half of the food street with huge eye-catching neon signboard, vibrantly coloured Japanese kites and lanterns clearly depict the Osaka theme. 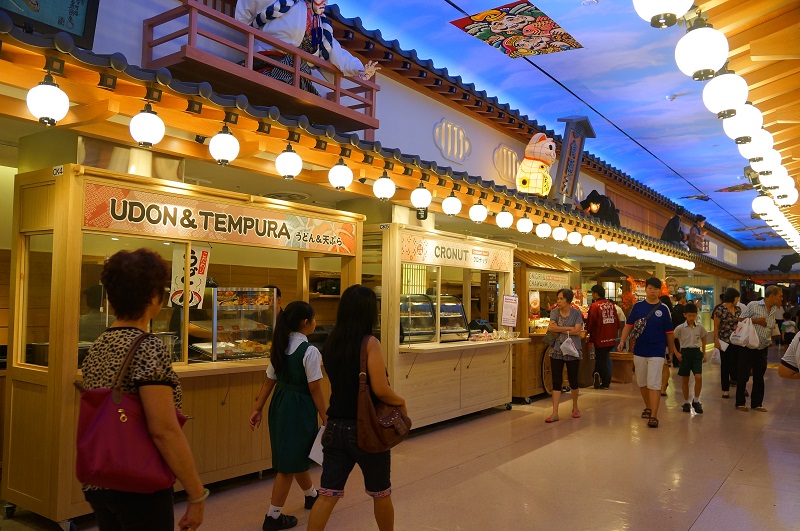 Upon entering the WAttention Plaza which is an ever-changing event space that makes available to you not just Japanese food but cultural items like the Akiu craft spinning top, it’s akin to having a taste of Japan without having to take a plane ride over! 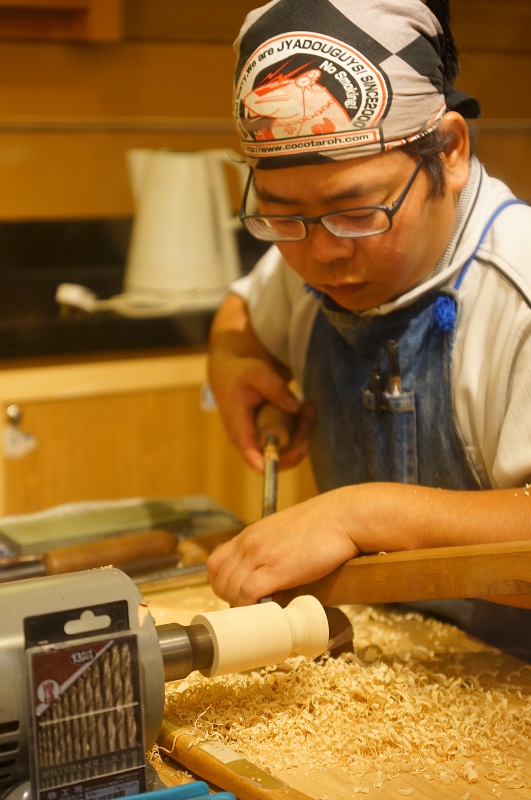 When I was there at the WAttention Plaza, I had a chance to taste their Oden which is the soup over here: 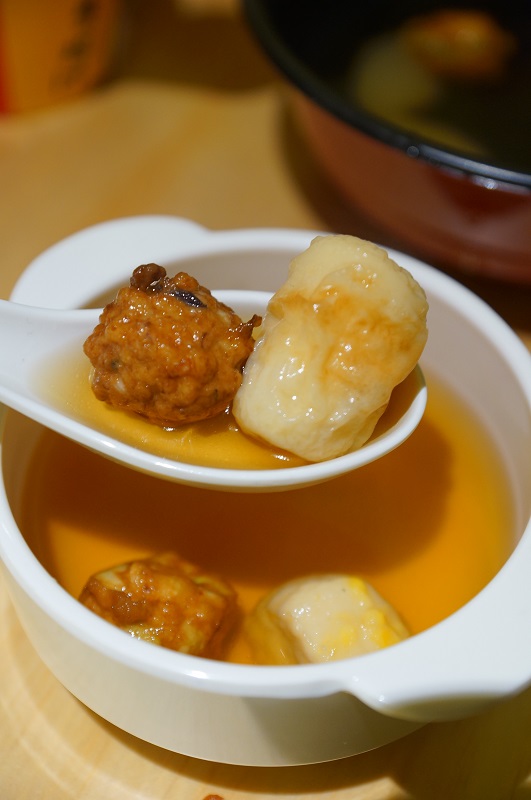 I also managed to have a bite of their Cuppa Karaage, whereby I chose to have the fried squid, and spicy/non-spicy chicken karaage. You get to choose from 7 different sauces to have your sinful but delicious crispy bites with and we went with the teriyaki sauce and the mentaiko mayo. The teriyaki sauce was pretty tangy while the mentaiko mayo was the perfect combination with the crispy bites. 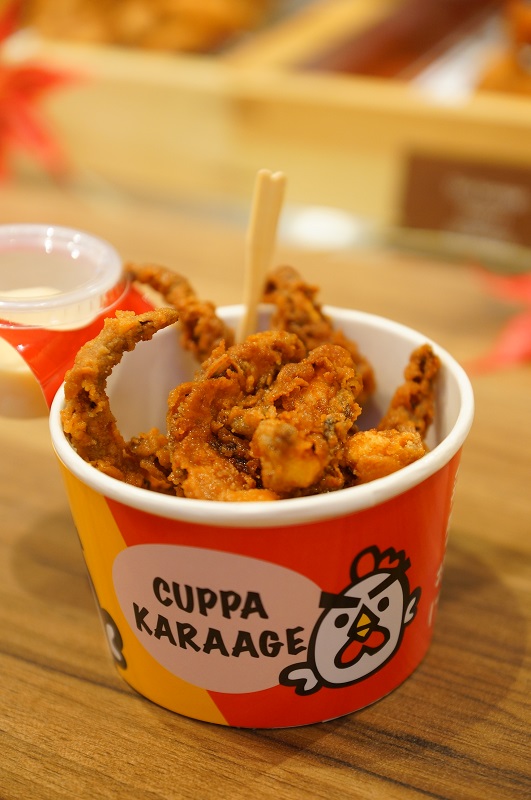 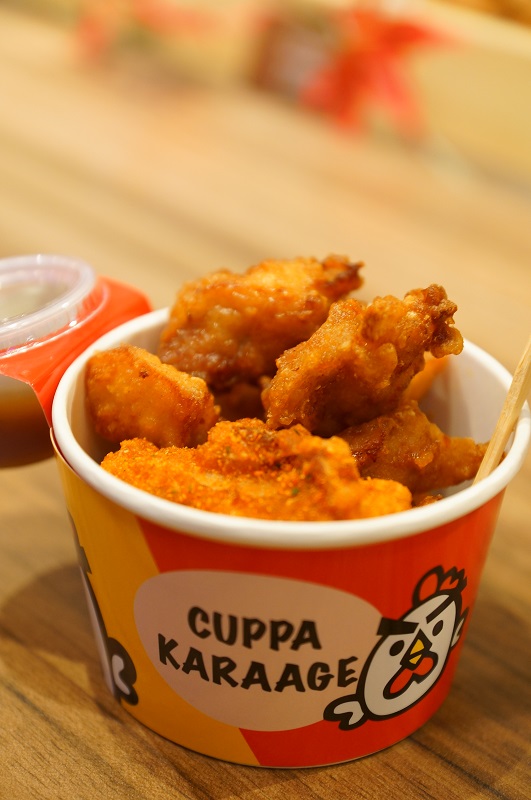 Last highlight of the WAttention Plaza which I would like to bring your attention to (do you get the pun), they even had a kiosk that sells Cronuts! I know that was the “in” thing a couple of months back but I have never had the chance to try it. Verdict: It looks way prettier than it tastes. 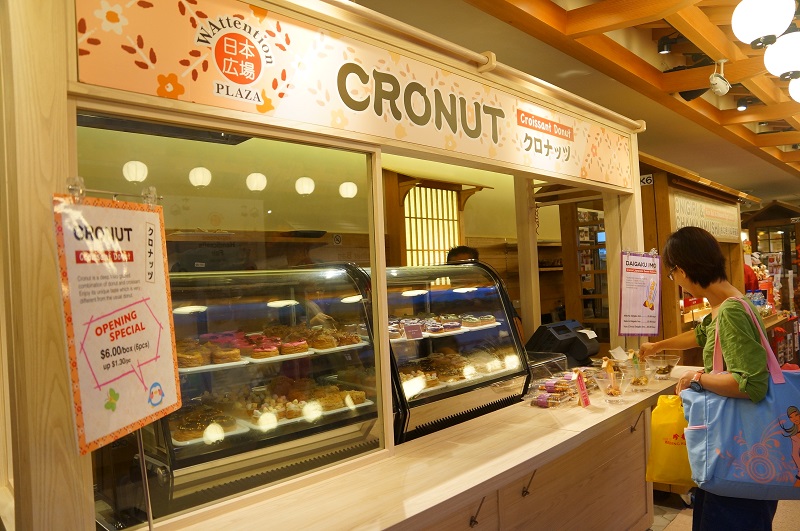 Next, we moved on to Green Pumpkin which is a unique Japanese bakery and patisserie. Green pumpkin has a wide range of pastries and breads and we were lucky enough to have a taste of a few of their specialties like the Green Pumpkin Bun, Yuzu Roll Cake, Chicken meatball bread, and white cheese bread with mozzarella cheese inside. After having a taste of everything, we came to the conclusion that every item was so soft and fluffy; it is quality that you’re biting into, not just bread. 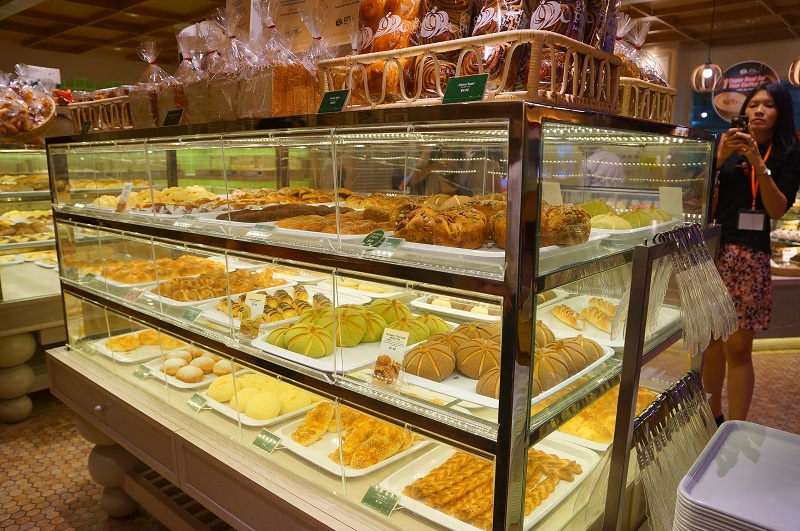 One of the restaurants they had in Shokutsu Ten was also Wadori, which most of us should be familiar with as they have tons of branches all around Singapore selling Japanese yakitori. Here they have an outlet whereby you can sit in and have your meal at! 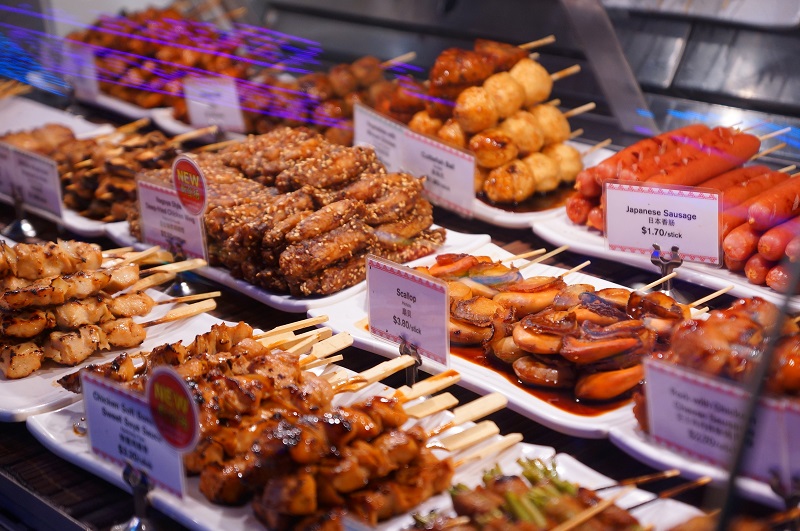 We also had the chance to have a tour round the Kuishin Bo Authentic Japanese buffet that featured a wide range of fresh seafood, sashimi, sushi, desserts and more – we were salivating by the time we made our way out of the restaurant! 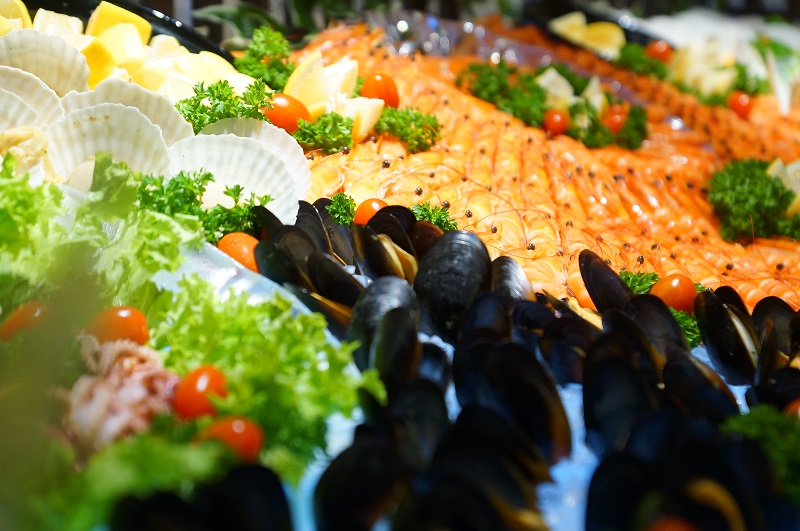 Every few months they will have a theme to the restaurant and currently they have a Sapporo Beer theme to it so if you are a fan, do make sure to come check it out. I know for sure I’ll be dragging my family down to try this one day. 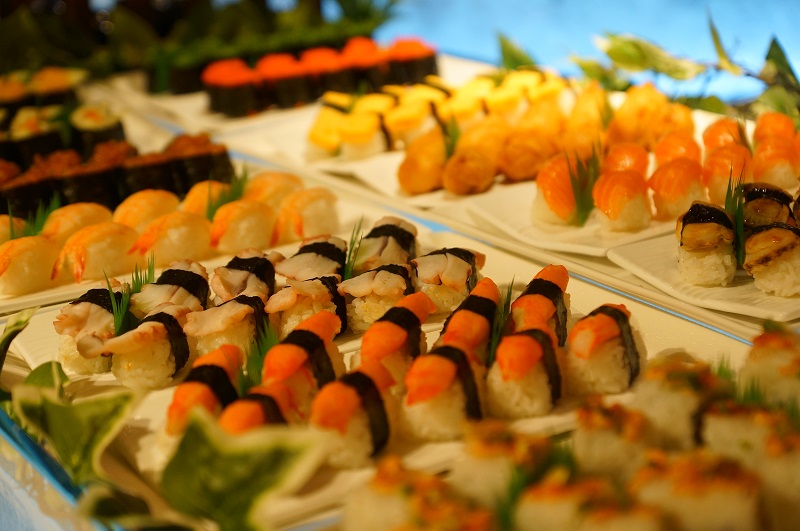 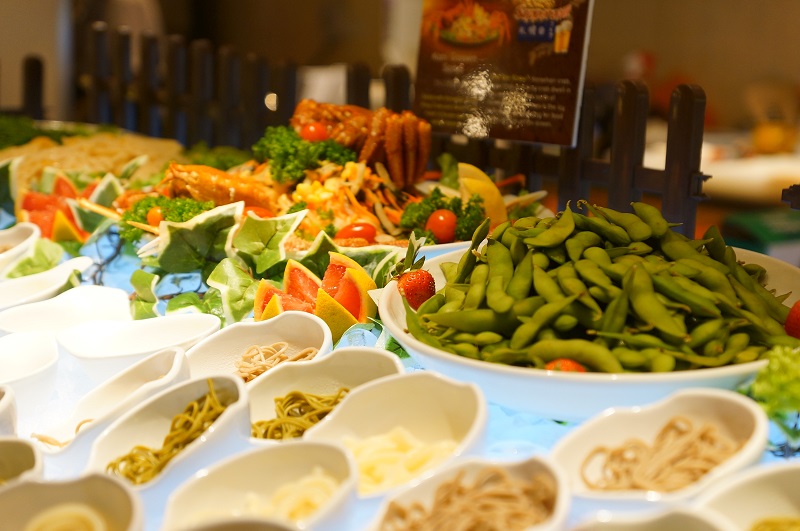 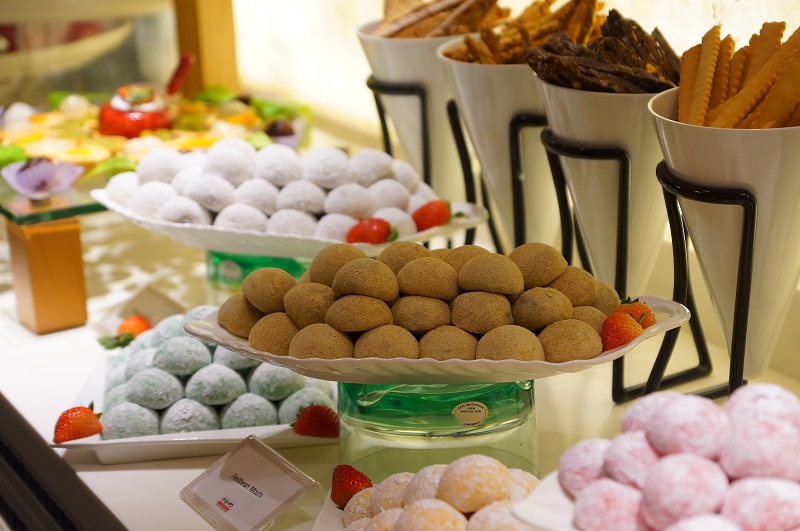 Last but not the least, we’ve finally arrived at Kabe no Ana, a renowned Japanese pasta restaurant that has a café concept to it. Available only at Jurong Point is the all new Kabe no Ana – The Café. With the current café hopping craze over taking Singapore, Kabe no Ana – The Café has a special café menu featuring all day breakfast items, desserts and specialty coffee. 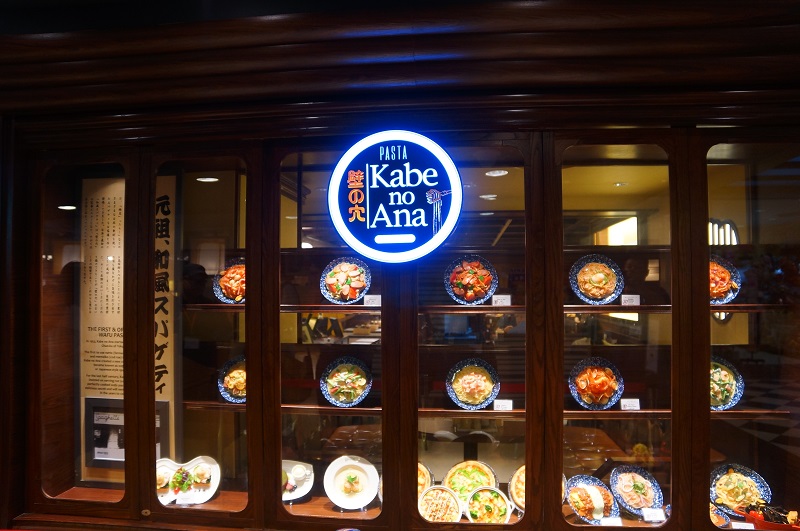 For the appetiser, we had the Jyako salad which features some Japanese silver anchovies, potato crisps, seaweed topped on assorted lettuce with shoyu dressing on the side. The greens were very fresh and crunchy, I absolutely loved how the potato crisps and anchovies gave the salad the edge. 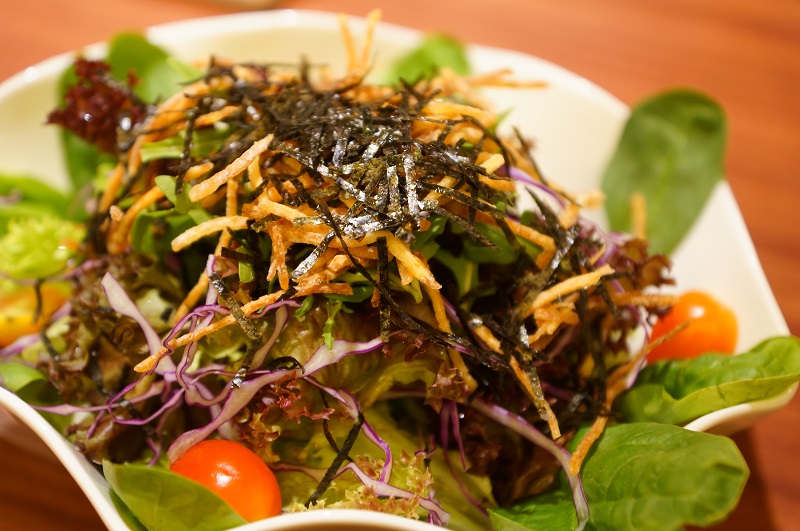 Under the main course, we had the Eggs Benedict with poached egg served on toasted bread baked fresh from Green Pumpkin just a few doors away, with chicken ham, spinach, avocado and hollandaise sauce. Fret not, the usual portion is two of these – not just one. The eggs benedict was simply delightful as the egg was poached to perfection, with the bread soaking up the goodness of the egg and the hollandaise sauce, this is a dish we highly recommend!

Kabe no Ana is well known for its Mentaiko Carbonara as this dish originated from this restaurant. To ensure that the quality of this dish is not compromised because it is miles and miles away from its origin – Shogo Nishimura volunteered to be relocated to Singapore to look after this dish. A little back story about Shogo Nishimura; he cooked his first pasta meal when he was five, so it was no wonder he later on went through seven years of learning the fine art of Japanese pasta preparation under the mentorship of master chef Iwamoto of Kabe no Ana Japan. 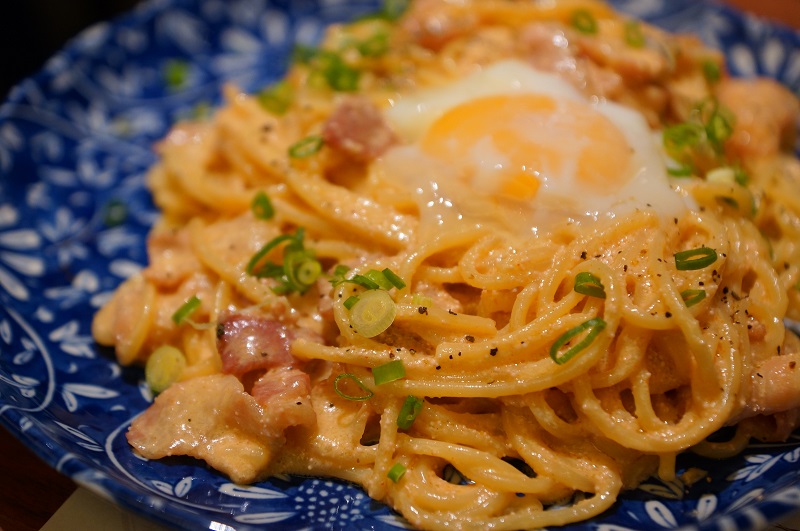 Upon learning how Mentaiko Carbonara originated from Kabe no Ana, I had nothing but high expectations. And yet I was still surprised at how a simple carbonara could taste this good, the plate was empty in seconds. The carbonara sauce was light, creamy and yet tasty all at the same time. The pasta was cooked to the right second and I could not fault this dish. (although some might find it a tad too salty) If I had to sum up this dish in three words, it would be “to die for”. 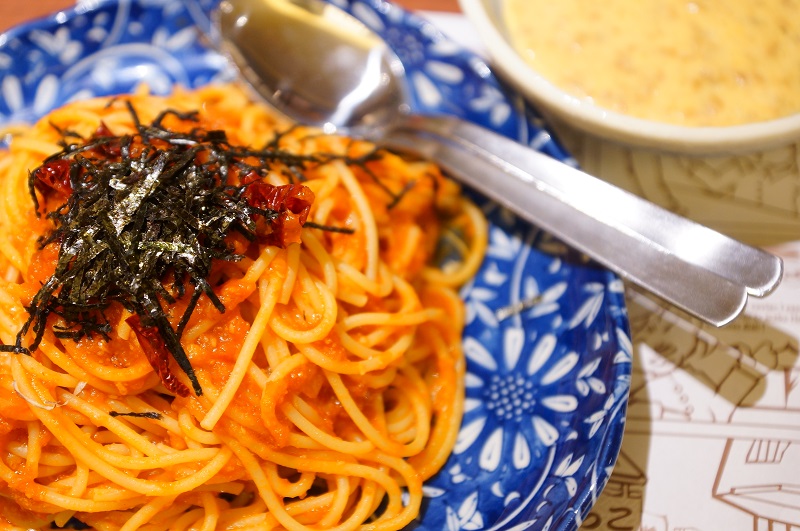 Next up was the Pirikara Natto Tomato pasta; and in case you’re wondering what Natto is – it is fermented beans, a dish that many Japanese eat on a daily basis for breakfast with rice. I have to warn you, the Natto has quite the nasty aftertaste, if you dislike strong smelling foods like durian, high chances are this would be a miss for me. 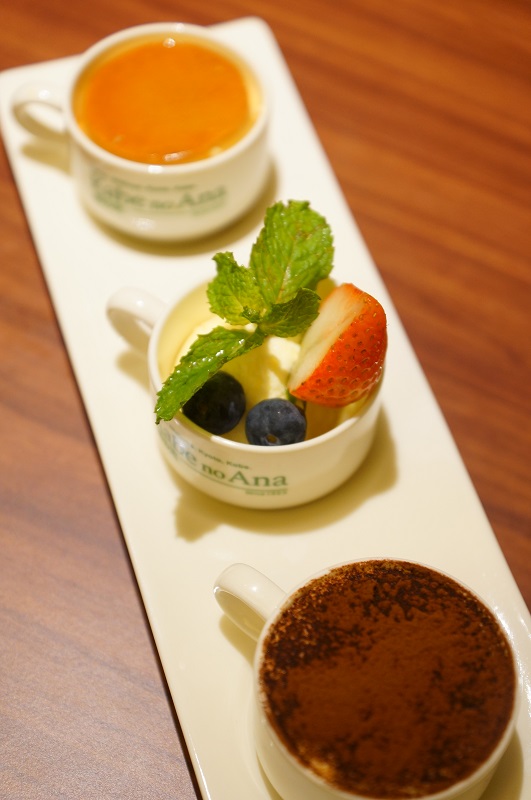 For dessert, we were served the tiramisu. Normally I am one that likes more layers of ladyfinger biscuits in my tiramisu simply because it’s the layer that is tastier since it soaks up most of the coffee liquor. When I dug my spoon into the tiramisu and saw that the mascarpone cheese took up almost 90% of the tiramisu with a thin layer of chocolate sponge at the bottom, I was prepared to dislike this dish. Once again I was delightfully surprised at how wrong I was as the mascarpone cheese was so light and fluffy and blended very well with the sponge layer at the bottom. 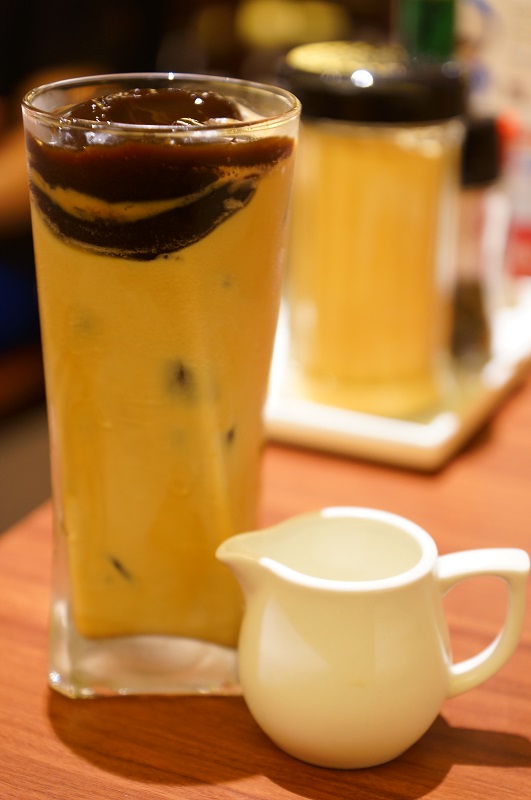 While we ordered our drinks at the very start of the food tasting session, we didn’t receive it till close the end just after our third main course. That’s because we were told that every drink is prepared upon order to ensure that what we’re served is the freshest we will get. I managed to have a taste of the Iced Matcha Latte with Azuki and the Ice Coffee with Coffee Jelly. 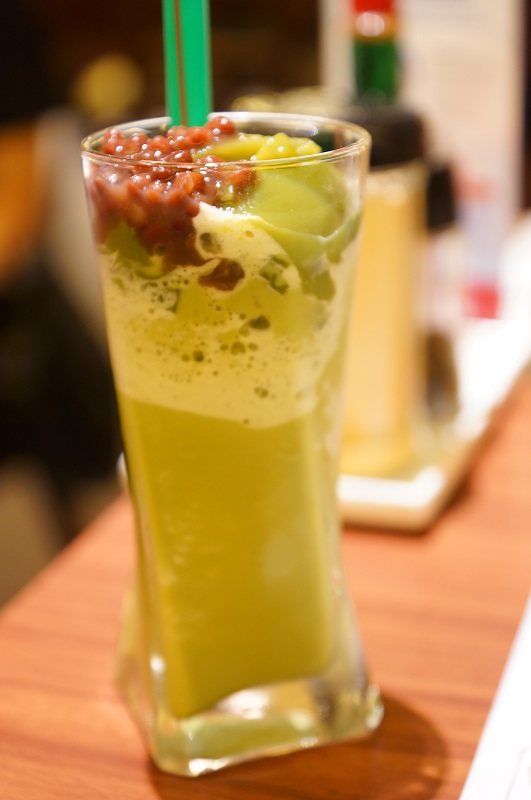 Both drinks were extremely rich in flavour, and to ensure that the drink would not be diluted, they have coffee ice cubes in the drinks instead. Do take note that the coffee used is extremely strong tasting – be prepared to add a fair bit of sugar syrup if you don’t like your coffee bitter! We loved how the jelly in the drinks gave us something to munch on too. 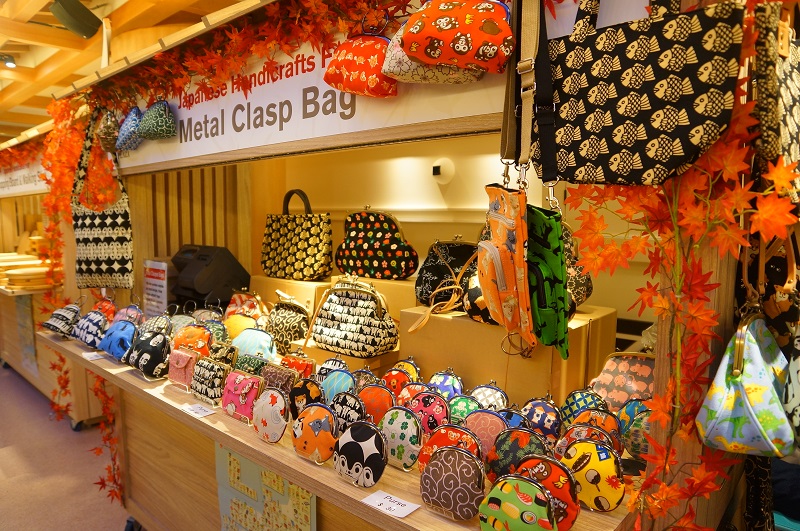 All in all, Shokutsu Ten is a must visit as there are tons of Japanese concept restaurants for you to choose from. And if that is not enough, the WAttention plaza has kiosks that change regularly to ensure that you would never be bored! We’re truly amazed at how much attention is placed on quality as we were also told that viscosity and texture machines are available at the central kitchen of Shokutsu ten to ensure that the sauces are of the same thickness and all pasta/rice you consume have the same chewiness. Huge thumbs up to the Japanese for upholding quality!