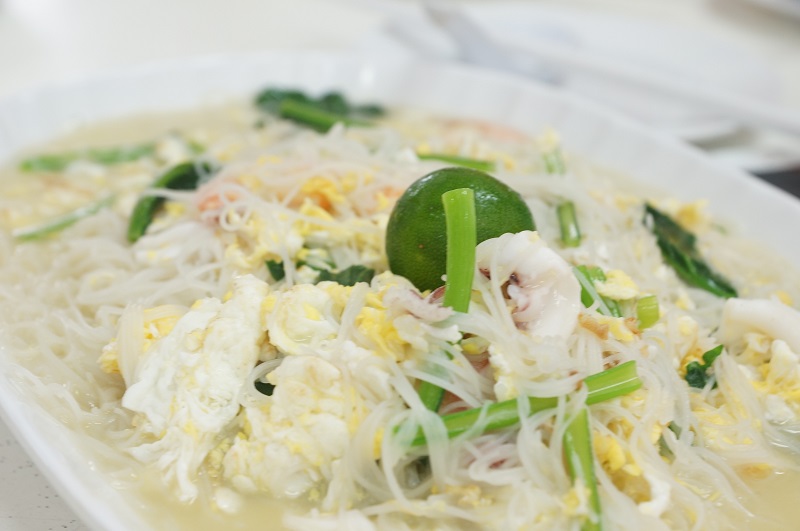 We were there at noon and the coffee shop was already packed to the gills, with a snaking queue of people waiting patiently for their turn to be seated. Should we join the queue or opt for somewhere else? Finally, we decided to try the white bee hoon next door first (yup, a copycat competitor we also reviewed – look out for the post this week!) and return later, with the hopes of the crowd dissipating by then. When we returned to the shop, the queue was still there, though shorter. But satiated from our previous meal, we decided we could afford to wait…and we were finally seated at 2.40pm!

We ordered the much sought after White Bee Hoon, a must-order signature dish for every one who visits the coffeeshop. At $8 a plate, we experienced a little bit of sticker-shock, but the serving size more or less mollified our disgruntlement. 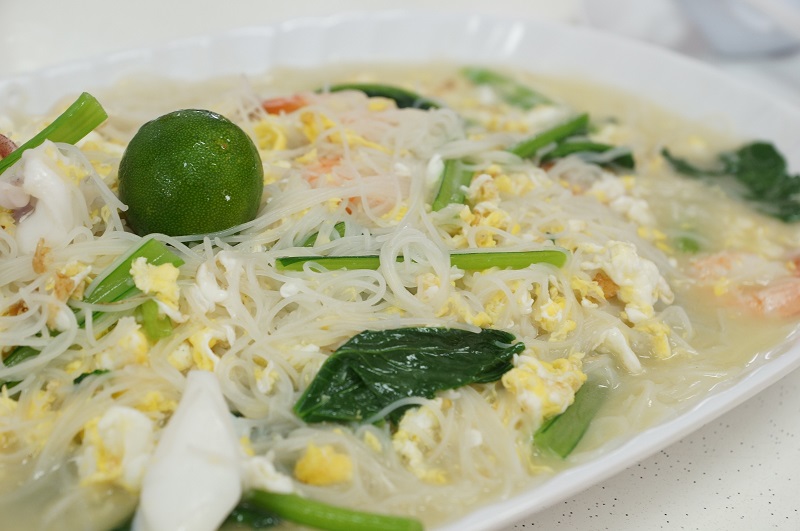 The white bee hoon had been simmered for a long time to achieve its soft yet not-too-soggy texture, a result that requires consummate skill. The gravy was full of flavour – though there were no visible chunks of fried pork lard in the plate, the rich and robust aroma served as compelling evidence, leading us to suspect the use of lard. Of course, they weren’t about to share their secret recipe with us, so this is a conclusion that’s strictly based on our fastidious taste buds.

We also enjoyed the depth of flavour in the gravy, which was further enhanced by the savoury taste of the prawns and squid, laced with copious quantities of eggs. The white bee hoon was fully infused with the essence of the seafood and perhaps lashings of pork lard. So don’t let its pale appearance full you – the White Bee Hoon is a plate of full-flavoured, savory bee hoon that we found very satisfying. 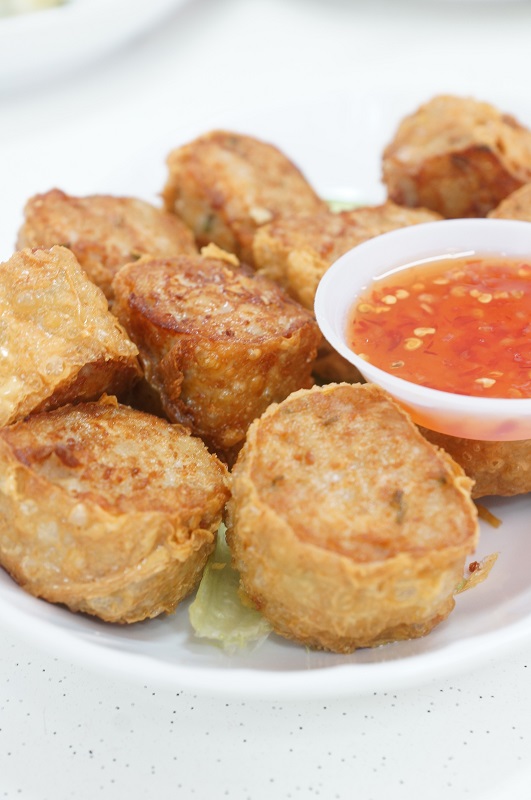 If you’ve been following our foodie adventures for a while, you should also be able to tell that we are big fans of Ngoh Hiang, which is a roll of meat, chestnuts and prawns, flavoured with 5 spices (thus its name – ‘Ngoh Hiang’ literally means 5 Spices) and wrapped in dried tofu skin, and deep-fried.

In this case, there were no chunks of chestnuts or prawn cubes; everything was completely mashed to a very fine texture in the Ngoh Hiang. It’s slightly more peppery, but we still found it enjoyable nonetheless, with a fragrance that was enticing. 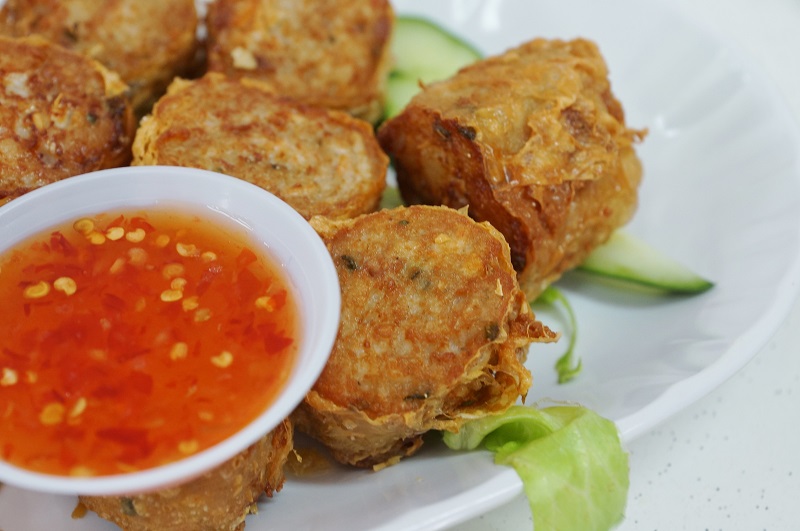 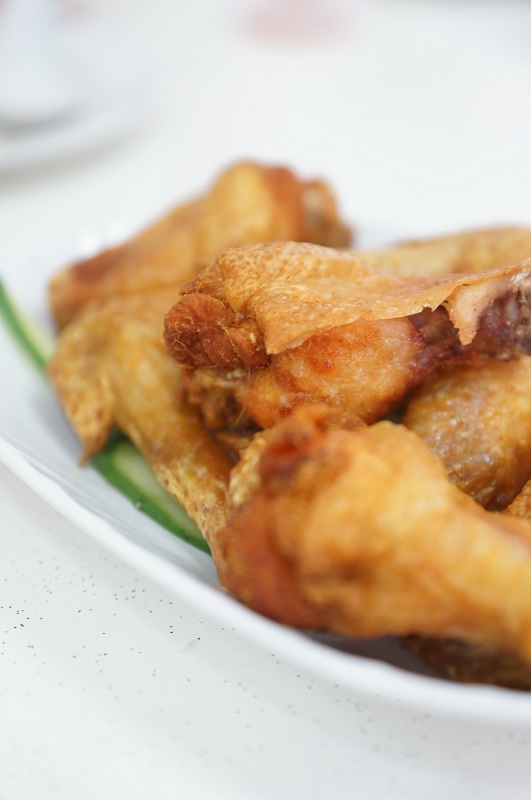 How is Indonesia Fried Chicken different from the usual fried chicken? Well, the Indonesian version is usually marinated with Turmeric. Here the piping hot chicken wings were beautifully fried to a golden finishing with a nice crispy exterior. While the meat was tender, the taste of the tangy yellow ginger was rather subtle, and we felt that the seasoning was perhaps a little inadequate – the chicken tasted kind of bland. 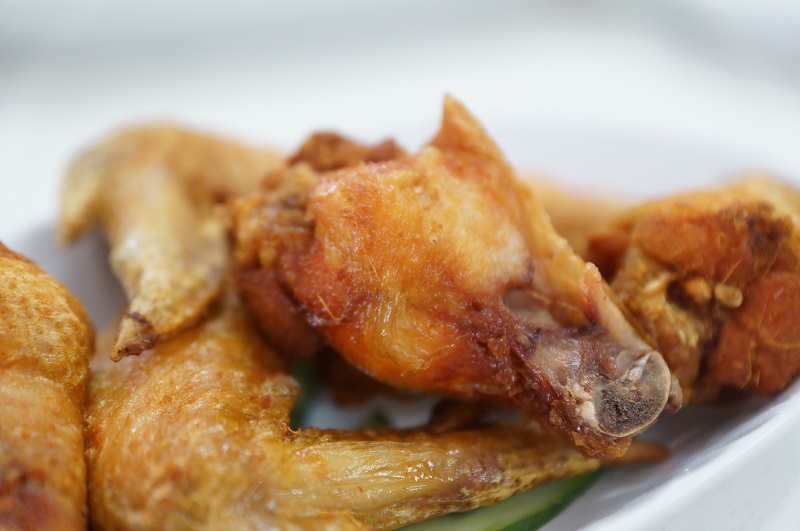 Overall though, the Sembawang White Bee Hoon is a hearty treat and lives up to its renown. Be sure to order the flavourful Ngoh Hiang – it will make the makan trip a memorable one! But be prepared to queue – good things are worth the wait, as many of their patrons can attest to! 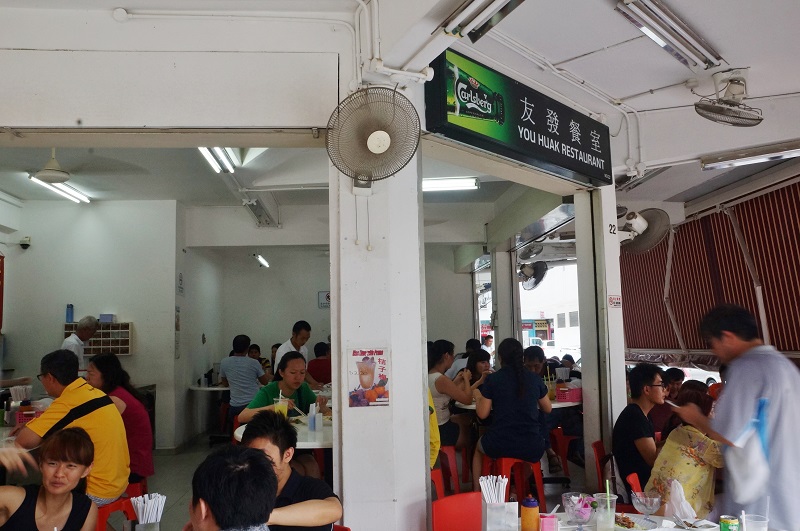