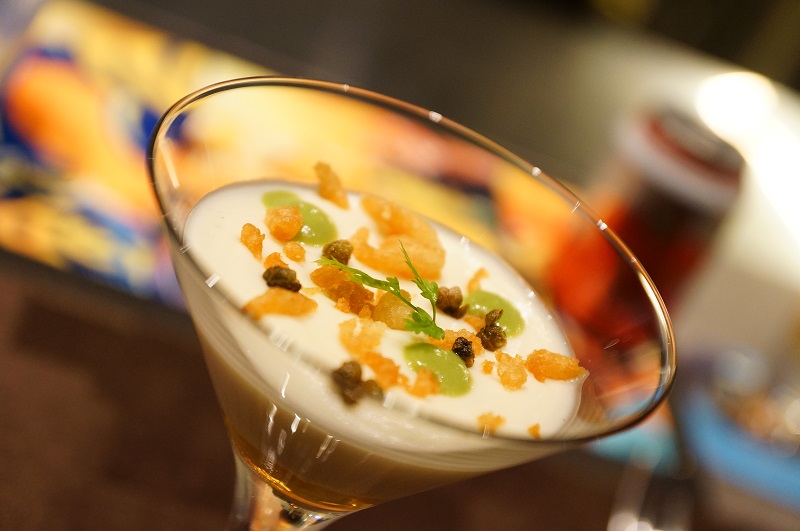 A nine-to-five grind, or following your passion and working tirelessly all day and night? The answer seems to be quite apparent for the majority, but there’s always a minority who has not shied away from choosing the path less travelled. Chef Han is undoubtedly one of the few. 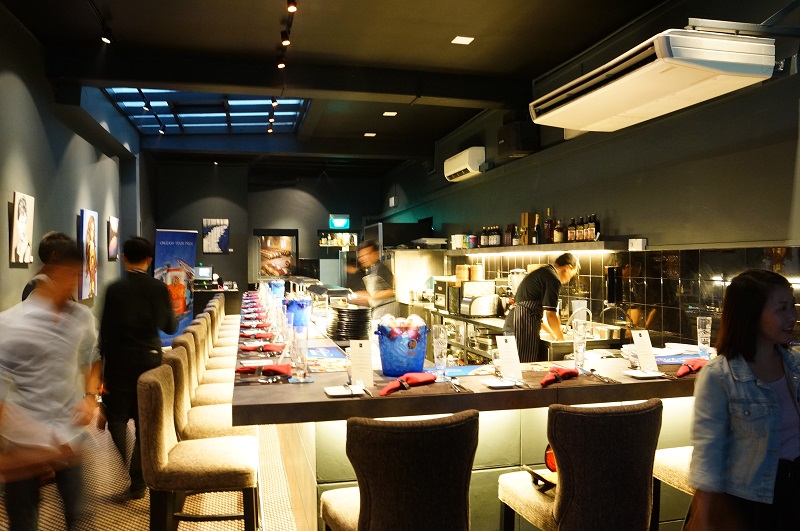 Leaving a cushy banking job to embark on an entirely different path, Chef Han and his restaurant Labyrinth was a natural choice for Tiger Beer’s latest campaign. Tiger Beer is now celebrating non-conformity and the courage to follow one’s dreams – and Chef Han apparently embodies this with unrivaled passion. We are glad to be invited to this interesting event to celebrate National Day with Tiger beer at Labyrinths – and the chance to appreciate Chef Han’s culinary skills, of course! 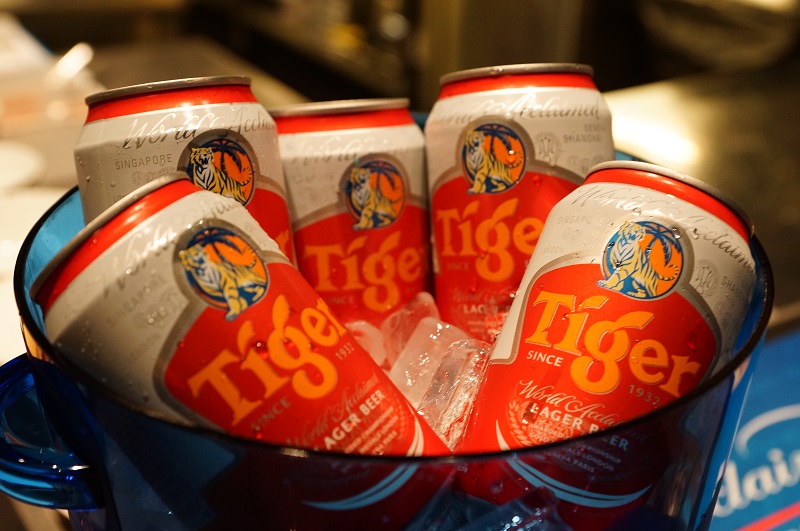 Along Neil road, the less than 6 months old restaurant had an understated signage along the walkway. 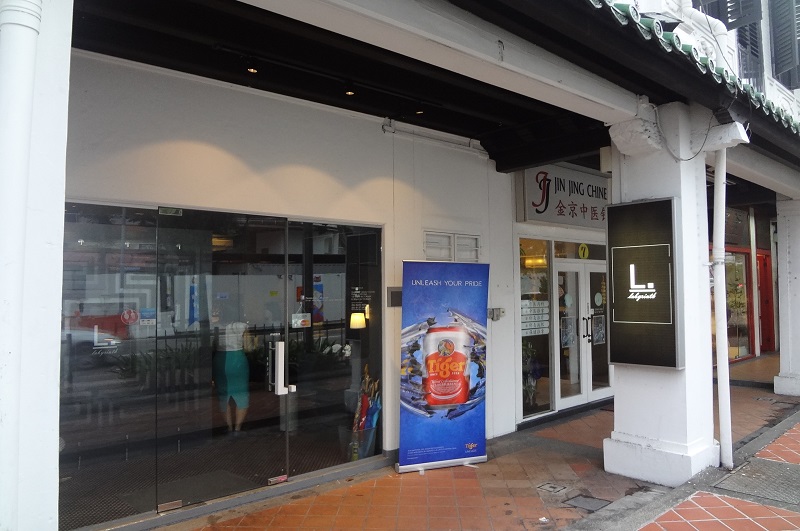 In the restaurant, we were enveloped by a sea of black, from the ceiling, walls, furniture, counters, reception, restaurant’s uniform and even the name cards are all in black, the only exception is the paintings that hung on the walls created by artist Kelly Ser. 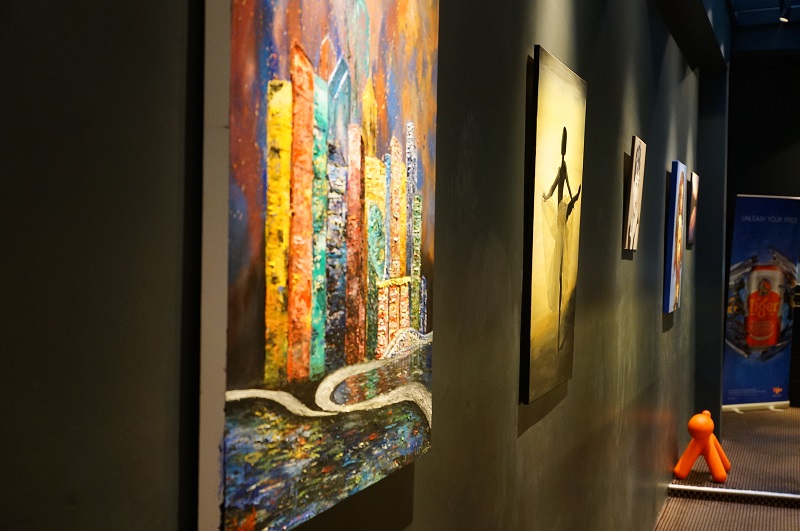 The warm lighting further intensified the already warm and closeted feeling created by the black environment. Black relates to hidden, secretive and the unknown, giving us a feeling of mystery and perhaps sophistication. True enough, what was presented by Chef Han harmonized well with the theme and perhaps his personality – full of surprises. 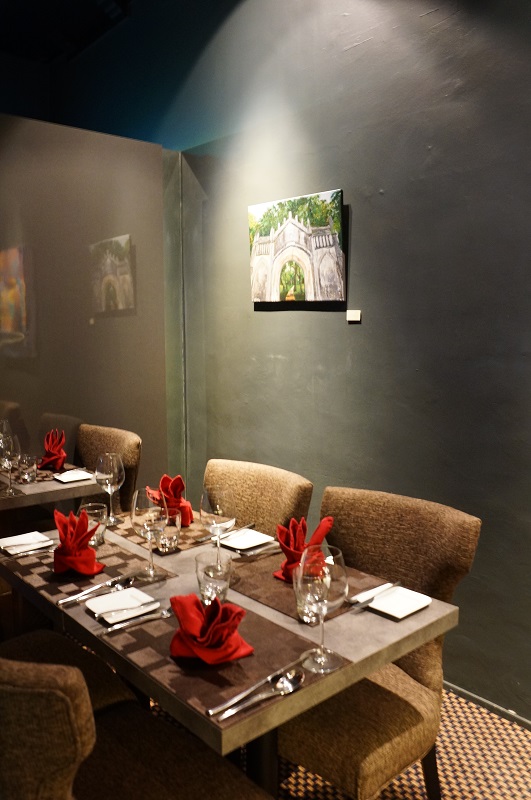 Chef Han loves to let his imagination run wild, he can turn the ordinary into something extraordinary, the expected into unexpected – curious? Read on.. 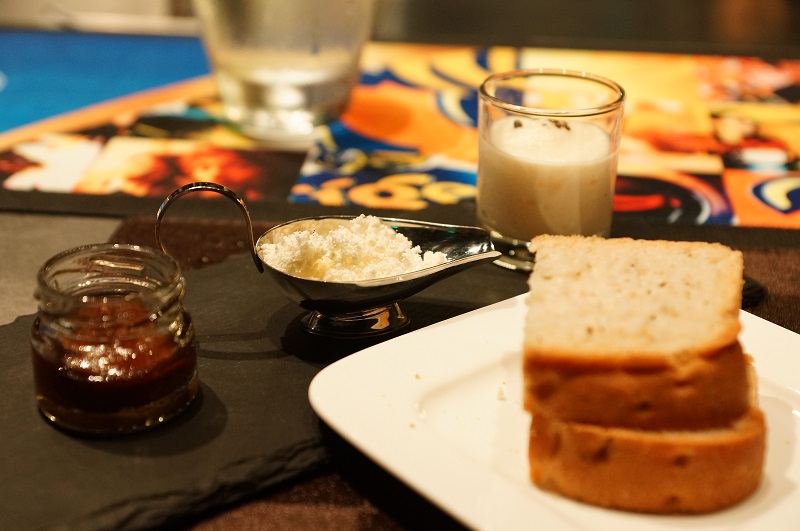 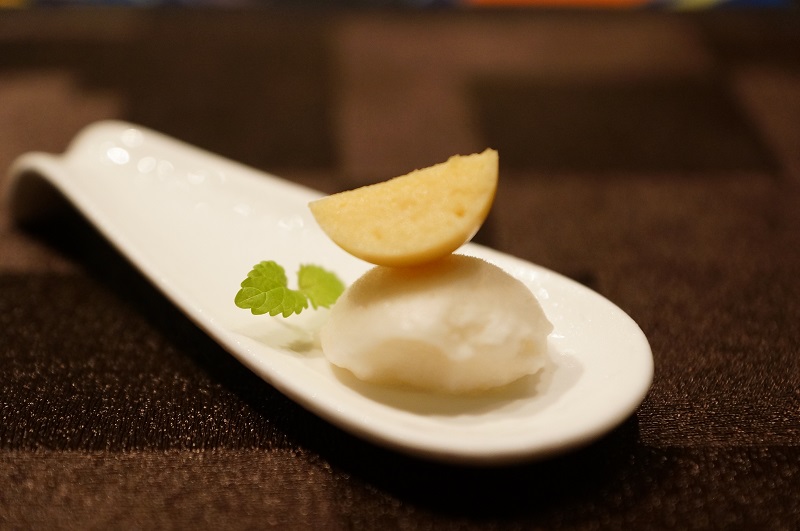 Logic tells us this is a common western dish, in our mind, perhaps some good quality fish marinated with some beer, fried and served. We were served the following: Bottom of the glass was some jelly made of Tiger beer, buried by the potato espuma and garnished by a sprinkle of crispy fritters. Taste pretty good and kind of impressed with the appetizer, we stilling waiting eagerly for our fish and chip.

“This is the chef ‘s Signature dish, the Labyrinth Chili Crab.” whispered the waiter.

“Excuse me, I thought the Fish and Chip will come first?”

“You just had the fish and chip, sir.” Said the waiter.

“WHAT?” My eyes widened.

My wife and I quickly realized that they had just served us their version of fish and chip in vintage glasses! Yes, there was cod mashed with potato espuma, that is FISH, with crispy fish fritters as garnishing, that is CHIP! If one’s imagination can stretch that far, we were eagerly awaiting the rest of our surprises.

With the embarrassment of the Fish and Chip, we told ourselves we better to be more imaginative this round. First of all, we double confirmed this was the right dish, the signature Labyrinth Chili Crab. There was a deep fried soft shell crab but no chili gravy. 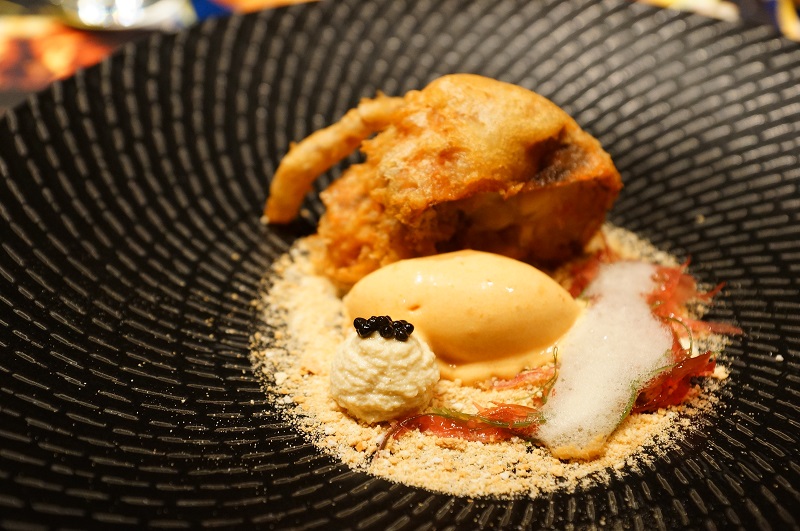 “The chili gravy is mixed with the ice-cream.” someone was quick to say before I even uttered a word.

We took our hats off to salute Chef Han for his creativity. Chili crab ice-cream! Who could imagine concocting such a flavor in ice cream form – and having it taste surprisingly good too? It blended beautifully with the tiger beer battered soft shell crab.

Chef Han was not only creative in whipping up interesting dishes, but in plating as well. Every dish was a visual and sensory feast. The soft shell crab dish evoked a sense of a sandy beach, hot sand, balmy weather… 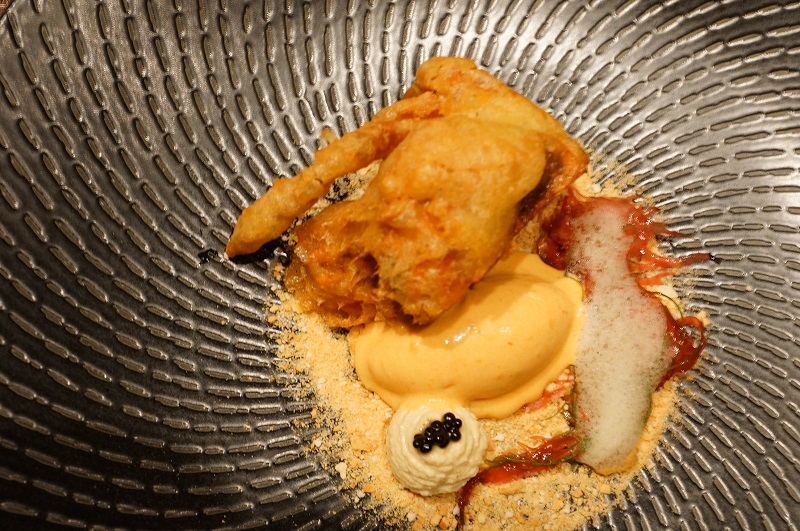 So when my wife Hui Ping told me that the next dish was ‘Satay Stick’, I was mentally prepared this time, pretty sure that the dish would not be served in skewer form. And I was absolutely right, the satay was not served on a stick – but in steak form instead. Specifically, it was steak soaked in satay sauce and pan fried. 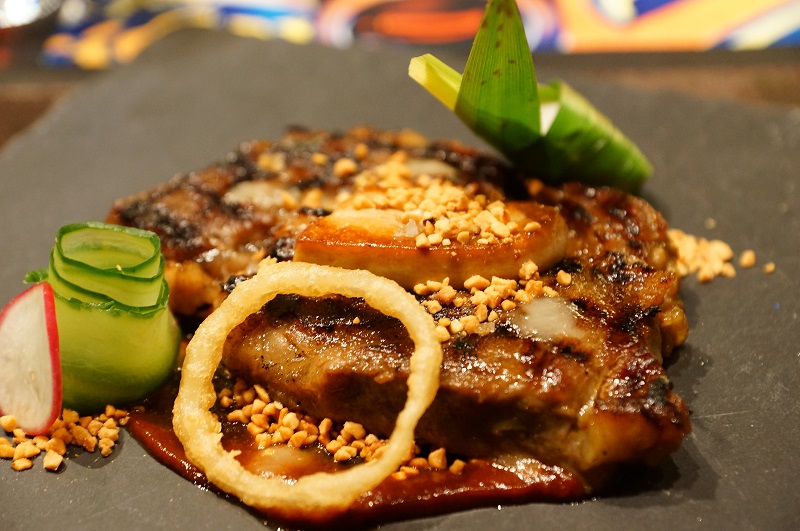 We learnt the trick, never let the name of the dishes deceive you, so when Radler Meringue Tart was served, it was actually a deconstructed tart – tiger beer frozen meringue with lemon curd with tart pastry crumbs. 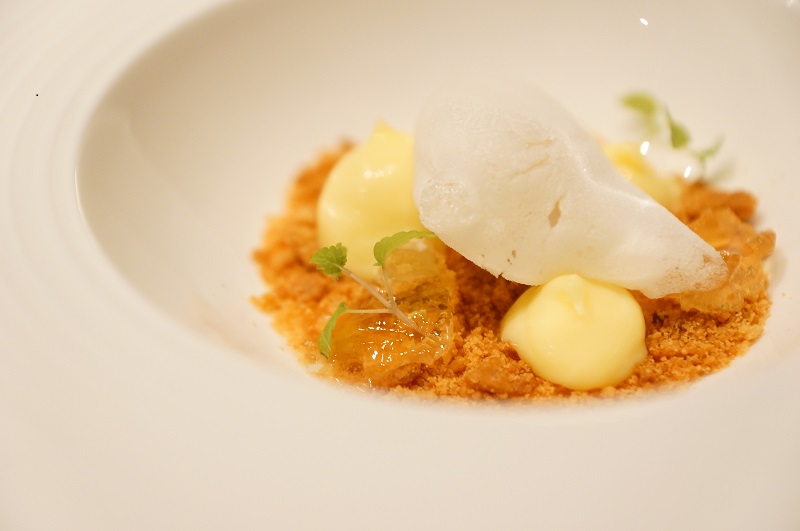 Since the menu is created in commemoration of our coming National Day celebration, it was no surprise to be served versions of local dishes – but to be told were going to be served a Singaporean breakfast was a surprise indeed. Especially at 9pm. 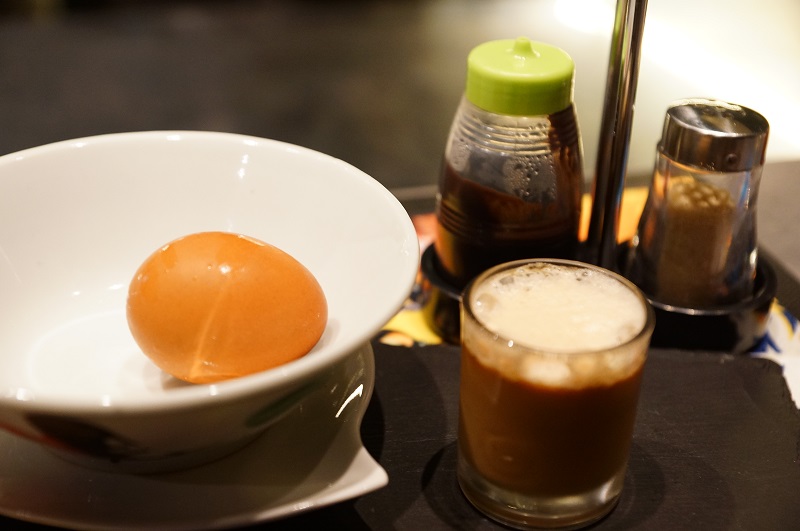 We were served a small cup of tea, a half-boiled egg in a chicken bowl, dark soy sauce and white pepper, but eating half boiled egg at 9pm? Something felt not quite right about it… 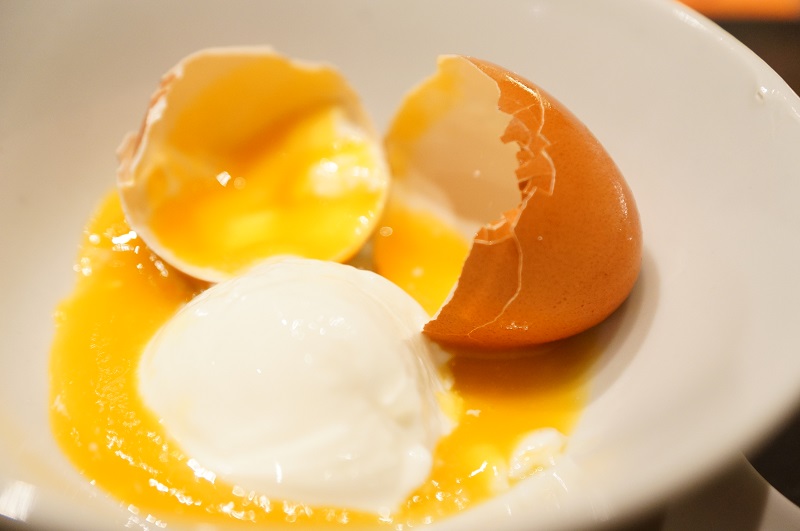 But upon closer inspection, this was no ordinary breakfast. There was a small hole in the egg shell, and once cracked open, there was “egg white” and the yellow “egg yolk”, where we squeezed the “Dark soy sauce” and sprinkled the “Pepper” over the egg. Then have a sip of the “tea”. 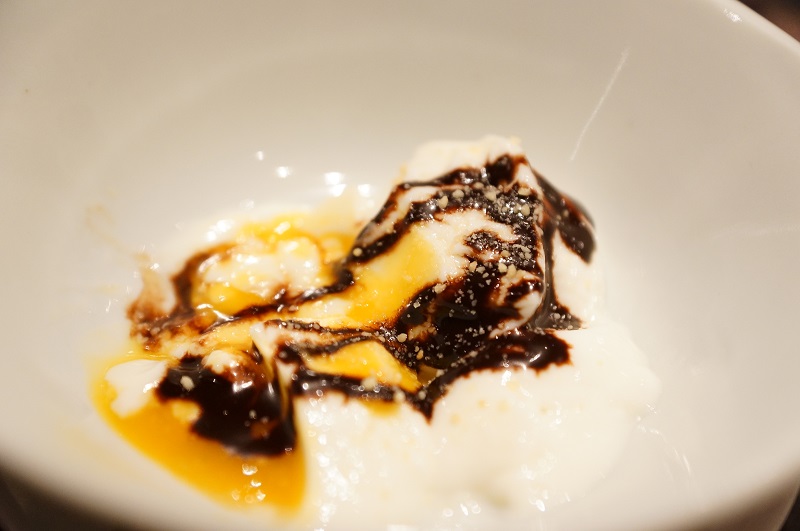 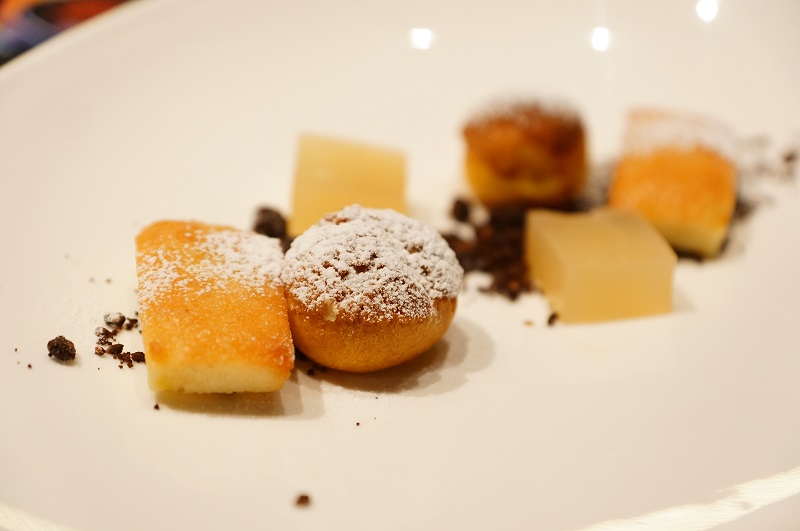 By now, we are completely kowtowing to Chef Han for all the surprises and those extremely creative ideas presented during the night. For a young and passionate chef, breaking free from the conformity and forging their own path, he has truly broken the mould.

For Tiger beer, we feel that they have definitely picked an outstanding talent to embody the brand.

And for us, it was an enjoyable night full of surprises. We appreciate how Chef Han turned ordinary ingredients into extraordinary dishes and made us – sometimes jaded patrons – sit up and take notice.

For my wife, she is impressed how Tiger beer can be incorporated into such delicious dishes – I am certain there will be a few more cans of Tiger beer in the kitchen to experiment on in future!

We definitely enjoyed the night at Labyrinth and the alluring food presented by Chef Han and of course, the cans of refreshing Tiger beer didn’t hurt as well.