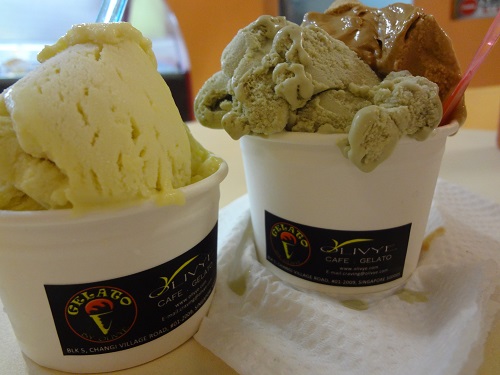 We were scrolling through the web, trying to find cafés located around the East side as that’s where we live at. Since my brother has got rather strict and picky taste buds, it took us quite an amount of effort before we found the Olivye Café which serves Fish and Chips. To our surprise, when we reached there, we seemed to be the only customers for the night. (Did we make the right choice coming here??) 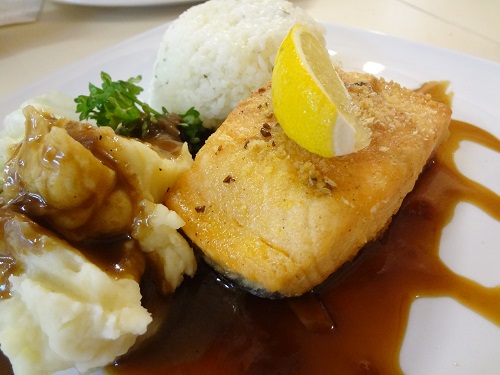 The Olivye Café was going for an open concept, so there weren’t any doors to separate the indoor air-conditioned seating area to the outdoor area. As a result, the aircon barely had any effect on us. We were originally seated at the corner, but we ended up changing our seats to directly under the aircon instead because it was so hot! Luckily for us, to make up for it, the lady serving us was rather patient and friendly. We ordered the Fish Cordon Bleu, Salmon Fillet and Portuguese Sambal Basa Fish. 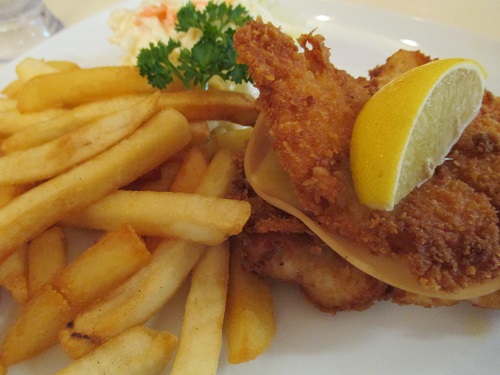 My brother decided to go for the dinner set which came with a choice of soup/gelato and drink. He opted for the option of the soup instead. The mushroom soup had tiny bits of mushroom and celery in it, and was a little diluted. Could have been slightly tastier! The garlic butter bread tasted average; bread was soft and moist though, so thumbs up for that! 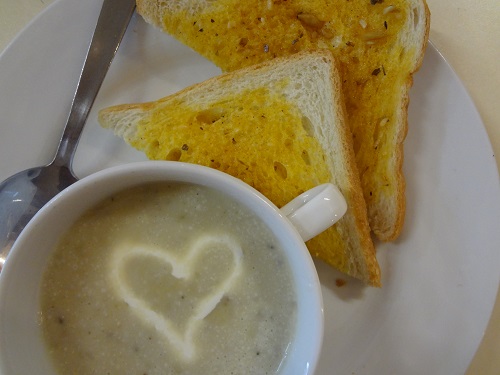 The Fish Cordon Bleu was surprisingly better tasting than we expected. It wasn’t the best dish on earth, but the fish had a nicely fried crispy crust, while still maintaining the moistness of the fish inside. Together with the melted cheese and the salted ham, the Fish Cordon Bleu was a joy to eat! The fries that came along with it were also reasonably tasty, my brother wiped out his entire plate!

Seeing salmon on the menu, I just couldn’t resist it and I knew I had to try it. The Salmon Fillet was slightly breaded on one side and the skin on the bottom was fried till crispy. To accompany the Salmon Fillet was a sweet sauce that resembled Teriyaki Sauce. The salmon was cooked evenly throughout, and wasn’t too dry. That said, it could’ve been slightly moister and it would’ve been perfect. Overall it was not bad. 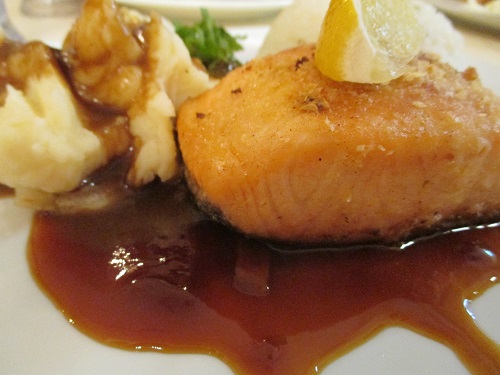 The Savoury Rice that I ordered was on the wet side. We are not sure if that’s the intention of the Chef, but we were not big fans of it. We all thought that the texture could use some improvement, taste wise too. It was definitely not fragrant enough. As for the Mashed Potato, there was nothing worth mentioning and that the sauce used for the mash was on the bland side. 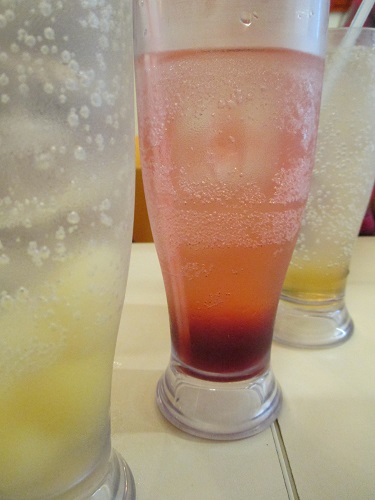 For all you sambal lovers, this is a dish you might want to consider when at the Olivye Café! The fish was fried to give it a slight crisp at the outer layer, while ensuring that the fish wasn’t dried out. The Sambal paste contained shrimps in it to give the paste an extra kick and crunch, making it blend rather well with the fish. 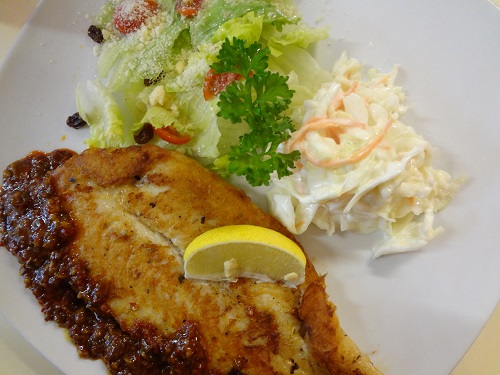 As for the Coleslaw and the House Salad, the vegetables used to make both side dishes were fresh. In the case of the Coleslaw, the vegetable went well with the salad cream. The house salad was made up of mainly cherry tomatoes, lettuce and powdered cheese. 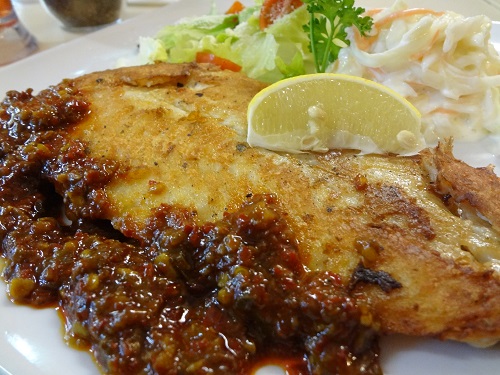 As the saying goes, “A meal without dessert is a meal incomplete.” To live up to this motto of mine, we couldn’t miss out on the Gelato! We ordered the Pistachio, Salted Caramel and Durian flavours.

The Pistachio ice cream was rather ordinary, not exceptionally fragrant, but it didn’t taste bad.

You can’t taste it on the first mouthful, but there’s this bitter after taste that wasn’t exactly pleasant. It was like the ice cream was burnt, and then lots of salt was sprinkled on it.

Perhaps the best pick of the night, there was a nice flavour of the durian and tastes rather close to the natural durian.

Overall, the food here was average but affordable, with rather decent portions. The service was not bad either. However, Olivye Café failed entirely in the ambience; it was way humid and warm. 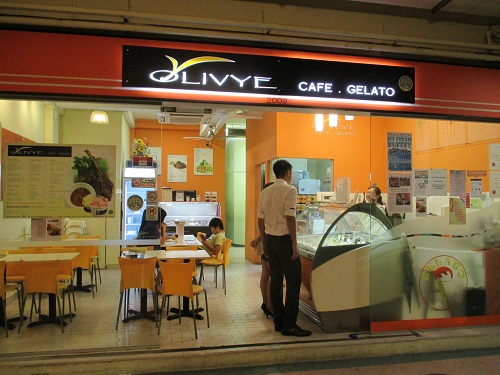