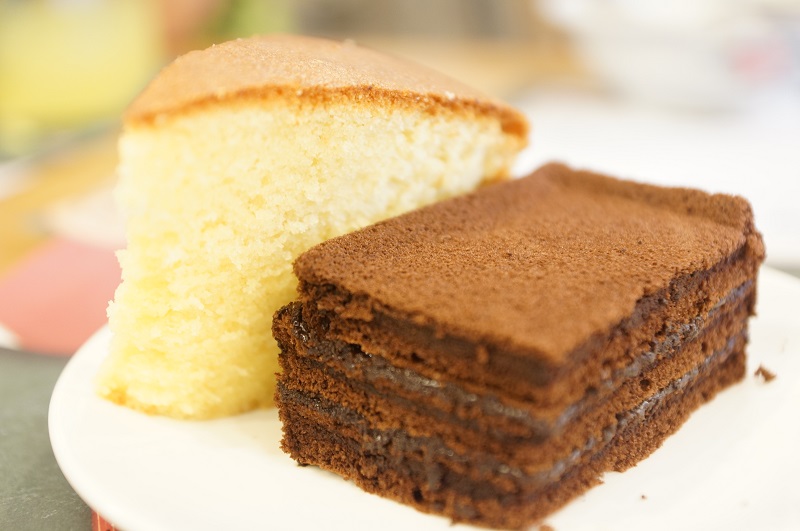 With technology creeping into our lives and becoming an inextricable part of our lifestyles, it is no wonder the childhood memories we had then back in the past would be pretty different from what the kids have now. And for that, I would have to say I am thankful I’m a 90s kid, having experienced (offline! non-digital!) games like Happy Family, Snap, Old Maid, Donkey and you name it. Was 5 stones a 90s thing? Or was that my parents’ generation? 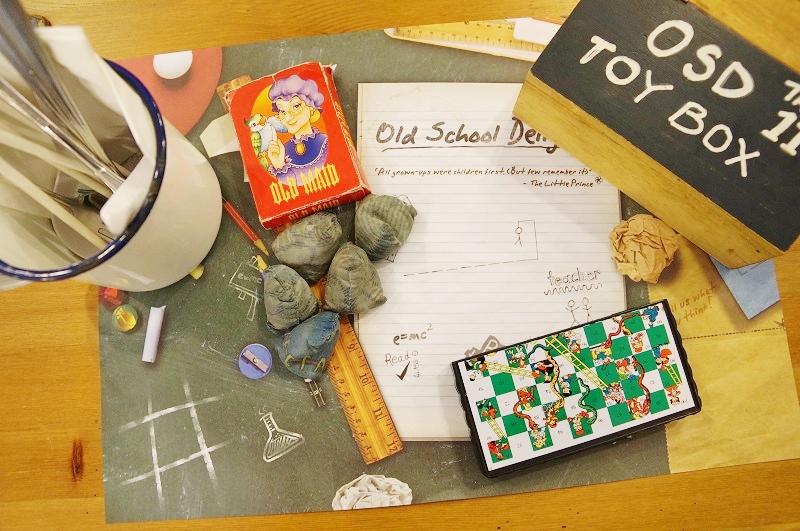 Anyway, when I got wind of the existence of Old School Delights, I knew we had to go give it a try. Entering the café, we were instantly greeted by little childhood toys which immediately brought us to a whole new level of nostalgia, but that’s not all. When we got a seat, there was a little treasure chest, containing old school games waiting for us. Before we could get started on the games, our food arrived! (For once, I actually hoped for the food to arrive later) 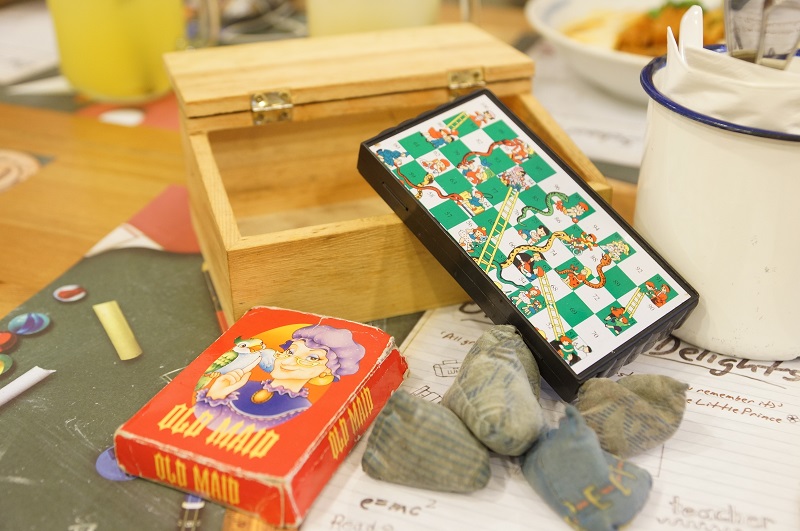 Before we go on to the food, may we just add that the menus that they had are all unique and “personalised”? For mine, the book belonged to Mark Ka from Class: Genius. (oh how apt that was) 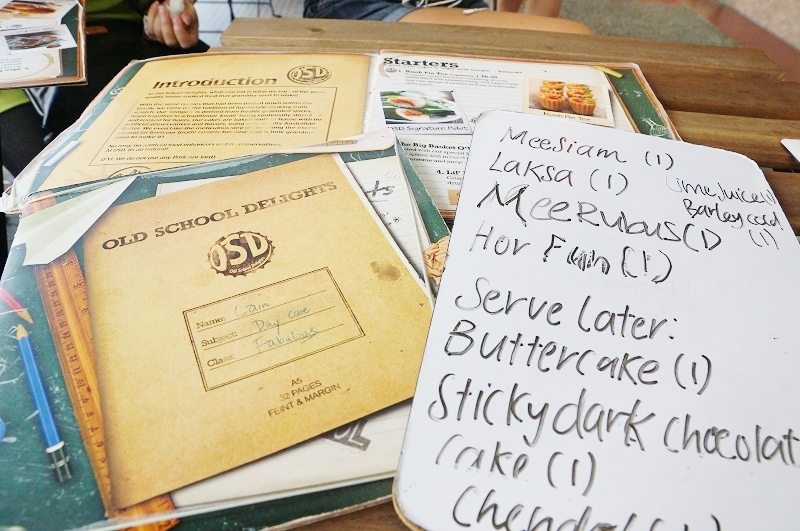 This Mee Siam was tangy and spicy, much more so than the normal Mee Siam, so it depends if you like it light or heavy. The gravy was not diluted or very thick, just nice. The beehoon was a little on the dry side, but overall it was still a dish worth trying! 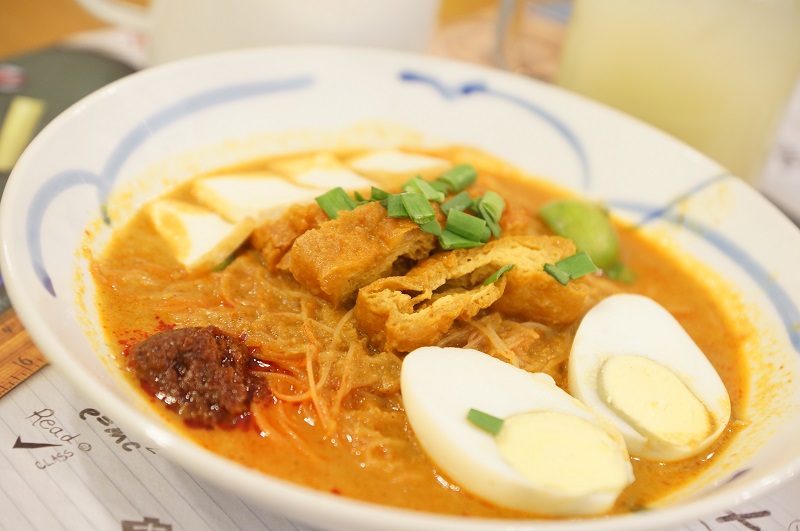 Plentiful amounts of chicken, fried onions and vegetables topped the hor fun, it did indeed have a nostalgic feel to it. Taste wise it was more on the bland side; could have used more seasoning. 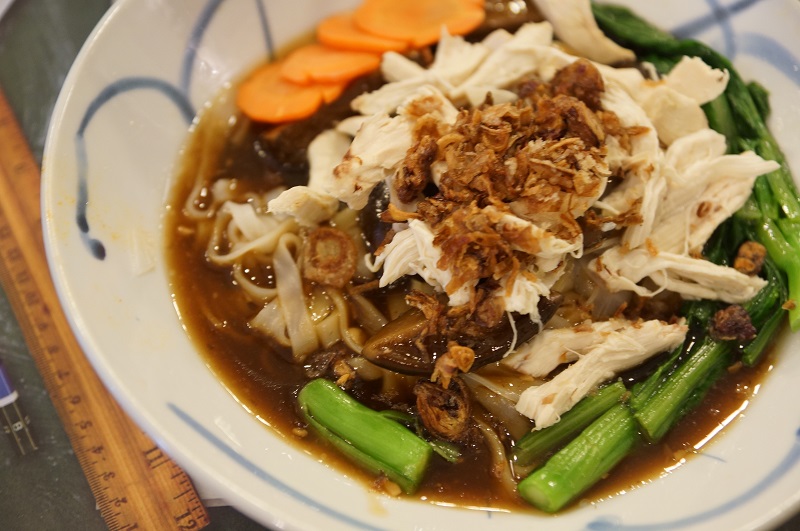 Gravy was thick and fragrant, with generous portions of coconut milk. There was also quite a fair bit of cockles. Overall a commendable dish. 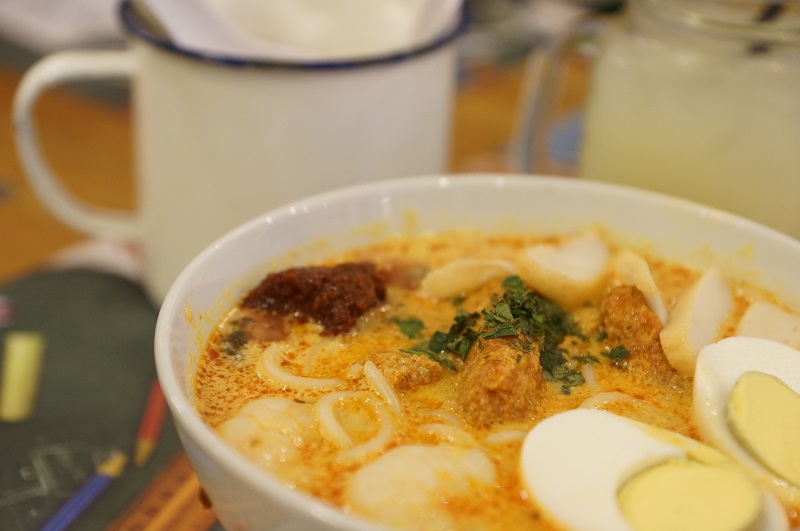 Gravy was average tasting, if not a little too sweet! Not an outstanding dish, the noodles used were also a tad hard. It gets a bit cloying after a few mouthfuls! 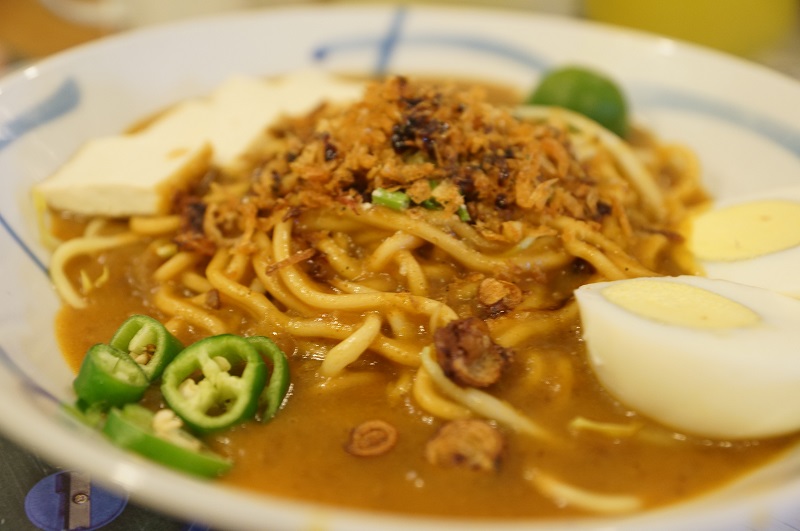 Ice was coarse, and there were very few red beans in the chendol. The only thing good was that the fragrance of the Gula Melaka was prominent. Otherwise, the coarse ice diluted the taste of the coconut milk present, and the red beans were a little too hard. It gets sweeter and sweeter the more you eat it. 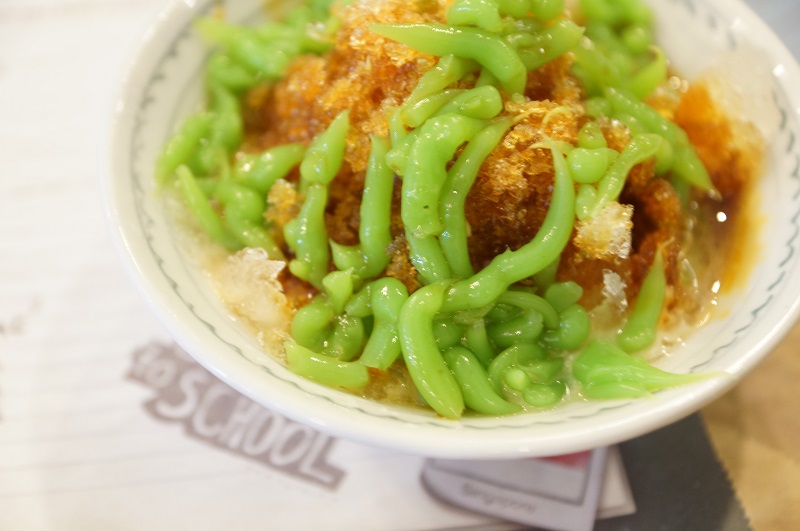 The cake was moist and huge and another plus point was that it wasn’t too sweet or too buttery! Unlike the normal butter cakes that are dense with butter and smothered in oil, this was a good balance. According to my parents, this brought back good old memories too, as they said it was just like what they had a thousand years before (Sorry if I exaggerate but that was the impression I had from my parents – by the way they are not old at all, both are considered young, pretty and handsome. Better make them happy…) 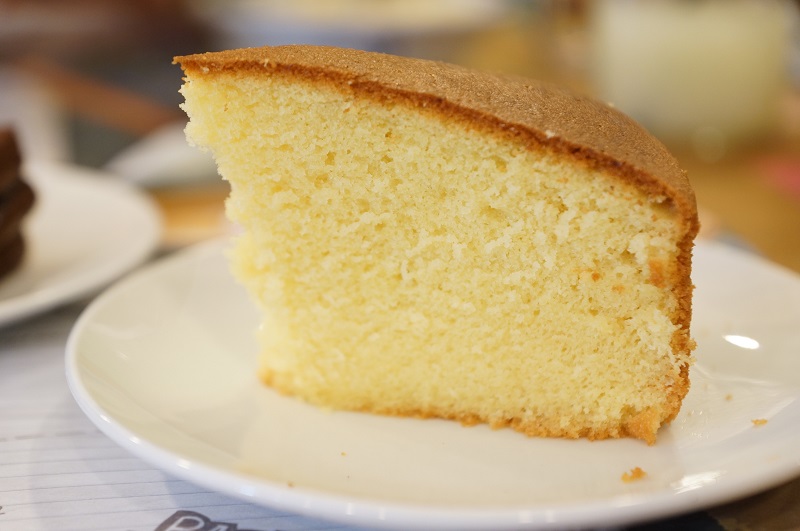 Like the butter cake, it wasn’t too sweet. The cake is slightly on the dry side though. The chocolate fudge in the middle of the layers was rich too. 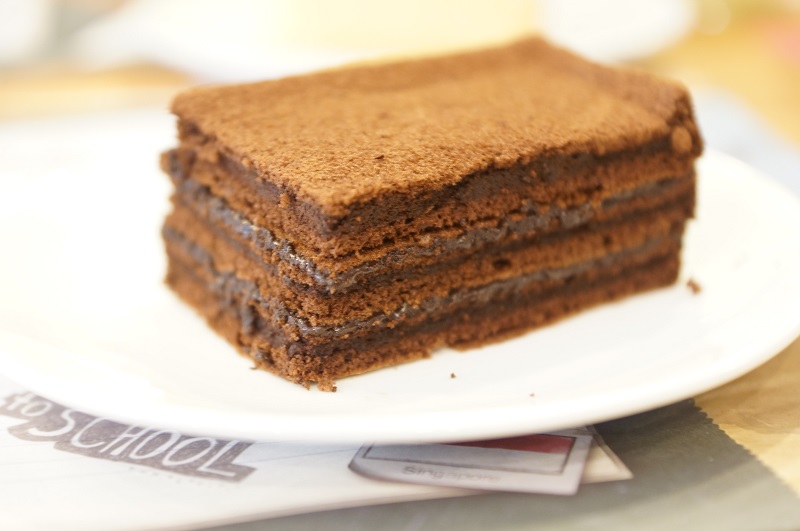 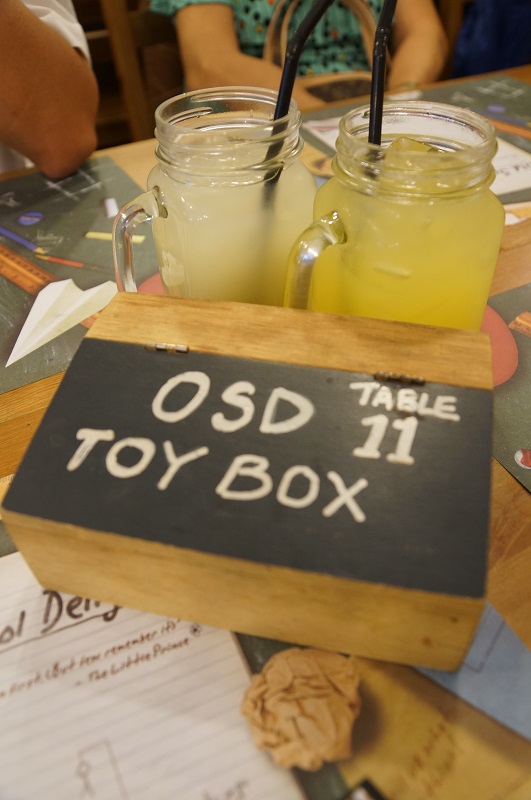 Thick with pandan leaves, we guarantee you wouldn’t be short changed one bit! 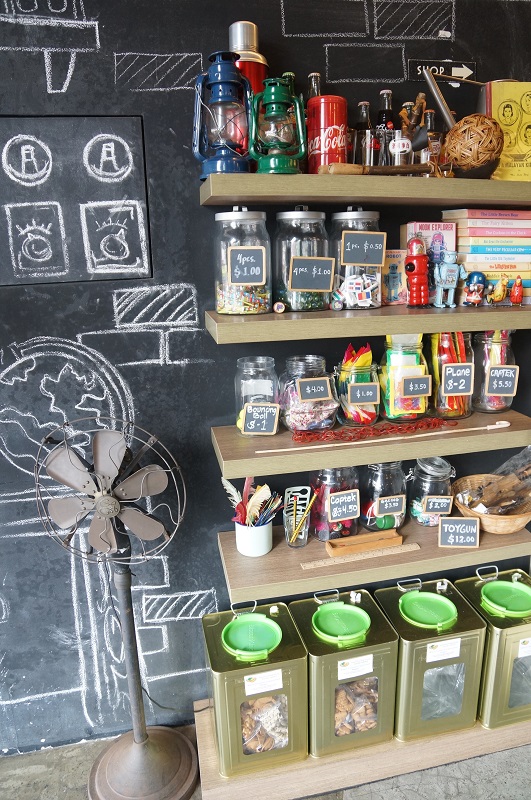 Overall, Old School Delights had average food but good customer service; this is probably what will get us back here again. While we have had much tastier and authentic mains elsewhere, we believe that the cakes are the ones you should give a try, for it can’t get more old school than that. 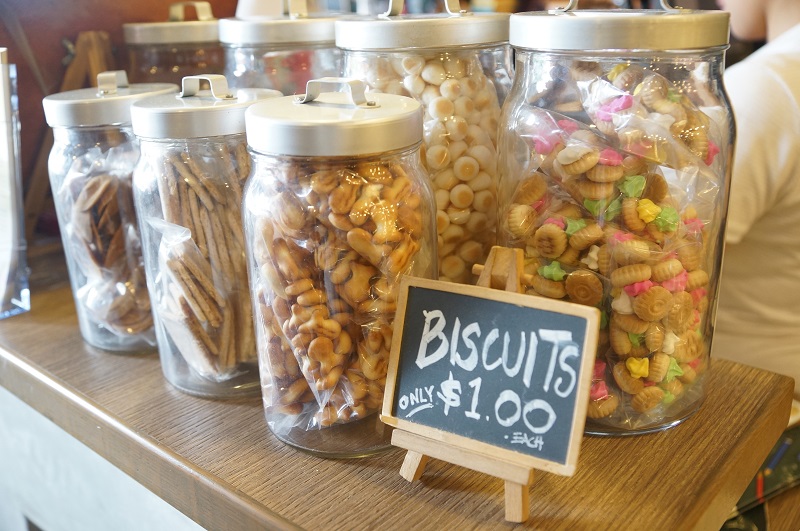 Food is probably not the main attraction here, but it is definitely in the blackboards, old text books, flower bud cookies and the five stones… as well as the old board games, which were useful in my attempts to connect with my parents and their generation. 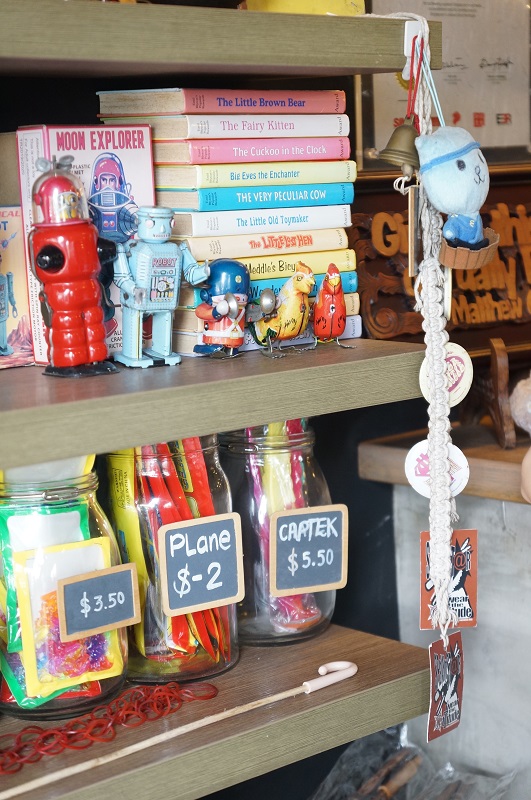 “Ding! Ding! Ding!….. ” It is recess time ! how about playing 5 stones or a snake board game after a plate of 20cents mee rebus? …Yup, I think I can definitely picture what’s going on in my parents’ minds. 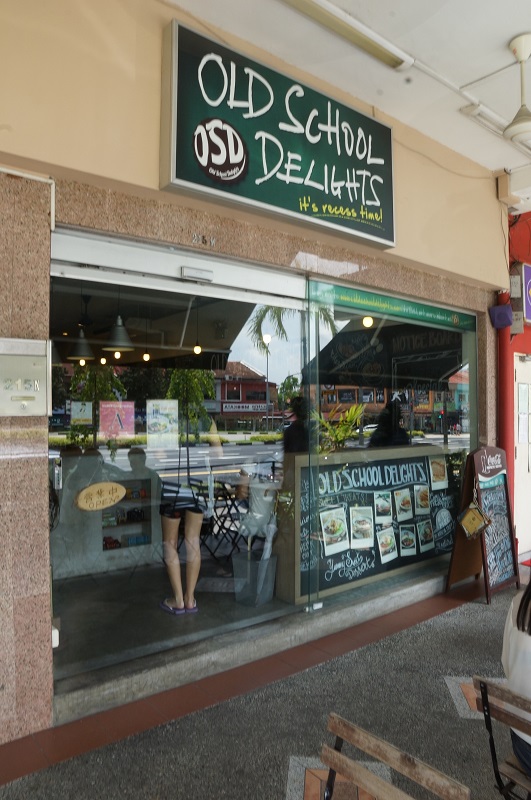