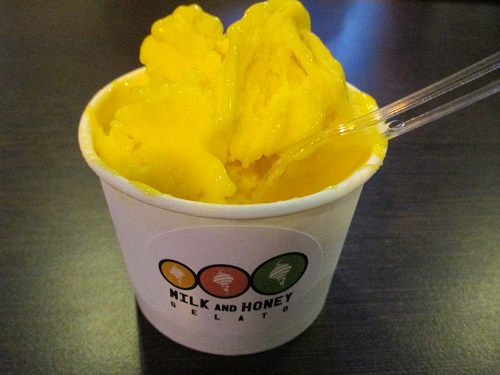 Note: My teenage girl volunteer to write this review out of guilt, she and her chubby brother slurped up both cups of ice-cream with nothing left before we returned to the table,( No, they did left with two empty cups for us) The two gluttons just have no mercy when come to desserts…sad….

Here is the review from my teenage girlgirl that offers another perspective from the younger generation about the desserts. 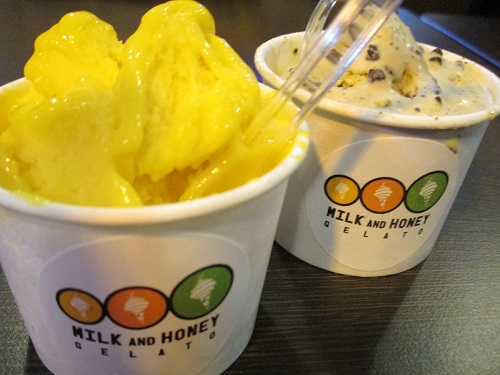 So as the saying goes, when stressed, have desserts, because DESSERTS is STRESSED spelt backwards! Cliché I know, but I second that! Recently checked out this ice cream parlour at Bedok : Milk and Honey Gelato. I was firstly very much attracted by its display of pretty looking gelatos. ( Who wouldn’t be attracted when seeing GELATO??) Colourful displays never fail to capture my attention and I have a thing for small little cafes. I am not sure if the same can be said for the rest of my family members though.

(P.S you can actually see my mum, my brother, and yours truly looking intensely at the ice creams in the photo above)

Being predictable and boring like a woodblock, my brother chose the “safe and can’t go wrong choice” of mango and passion fruit sorbet, while I chose the shy green nut flavour, which is made of Sicilian Pistachio with Belgium Bittersweet Chocolate bits. ( That’s the new flavour of the month of May! )

The service was slow. The person serving us was taking small little scoops once at a time, and after each scoop, she would then place it on the weighing machine. It took her more than a couple of scoops to finally get the right weight. I guess you can see it from another perspective, that they are being fair to all customers. But in my opinion, I am pretty sure 10 grams of ice cream won’t hurt!

Since the shop is located under a HDB block, the seats were outdoors. Luckily for us, we went in the night, so it was rather windy and it was quite a nice place to slack and “lepak” at. ( Do note however that there is a durian stall nearby, so if you are not a big fan of durians like I am, hope that the wind doesn’t blow the stench over! My parents actually went over to buy the durians, I was suffering the entire time.) 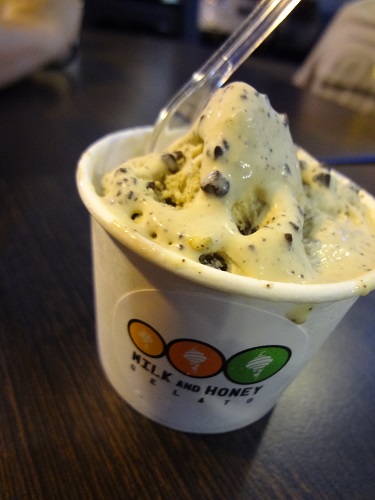 Now to the actual taste of the ice creams!

I personally felt that the mango and passion fruit sorbet was a little too sweet to my liking. It was pretty much like an average sorbet that you can get anywhere. My little brother loved it though; he was smiling ear to ear while enjoying his ice cream. Even stating that he was glad we didn’t like it so he could have the whole thing to himself.

As for the shy green nut, this flavour is more unique. The ice cream was just the right amount of sweetness, it wasn’t too sweet to the extent where you’ll be sick of it after a couple of mouthfuls, neither was it bland and tasteless. The base pistachio ice cream was milky and flavourful, while the dark chocolate bits helped neutralise the strong taste, the perfect harmony!

All in all, if you live around the area, do go check it out as they sell pretty decent ice cream! Do comment below and share with us other tasty flavours that we did not get the chance to try.