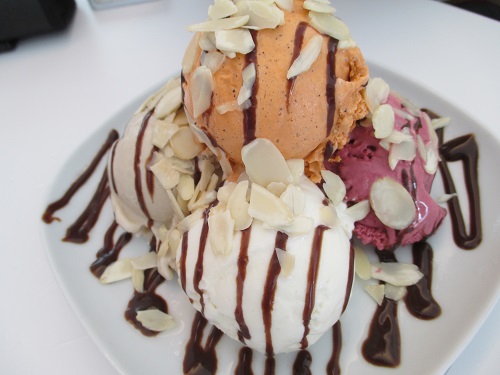 What better way to end a disappointing lunch than to give it a sweet ending? That was how we ended up at Marble Slab Creamery after lunch at The Asian Kitchen. It’s getting harder and harder nowadays to differentiate between all the ice cream parlours. There’s of course Marble Slab Creamery, then there’s Cold Stone Creamery, Cold Rock Ice Creamery (what happened to originality) and our very own local Island Creamery. Not forgetting the already well known parlours like Ben & Jerry and Haagen Daz. 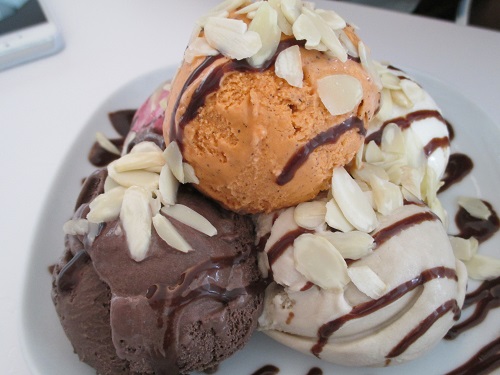 We had quite a fair bit of trouble deciding what flavours to go for since the variety they offered was aplenty! We took quite a while, but luckily the girl at the counter was real patient! At the very end we decided to go for Caramel, Double Dark Chocolate (which she said was very popular), Cheesecake (my brother tried a mouthful and loved it), Red Velvet (I am crazy over anything red velvet related) and last but definitely not the least, Thai Milk Tea (their new creation).

Nothing exceptionally special about it, tastes pretty normal. Not very sweet though, which we like!

Not sweet since it’s dark chocolate, but not too bitter till it bites your tongue. Since it’s Double Dark Chocolate, you can only expect it to be double the richness!

Not a personal huge fan of this flavour because the cheese was a little too sour for my liking. That said, my brother absolutely loved it! Quoted from him “the only bad thing is that I feel very ‘gerlat’ after a few mouthfuls.” Might want to consider this before ordering a huge portion!

I always loved Red Velvet, but this one might be a little too rich and thick. It’s sweet, chocolaty and cakey. You might feel kind of ‘heaty’ after eating too much! (then again, we had 5 scoops of ice cream so maybe this flavour isn’t to blame) 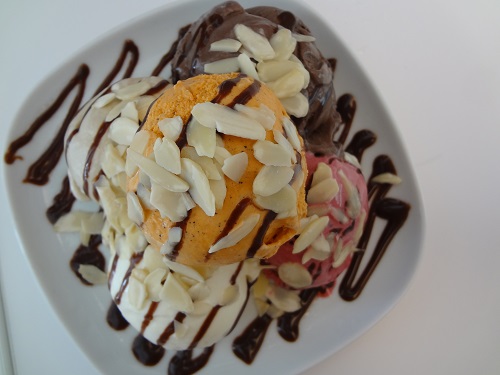 THE BEST FOR LAST. Whoever created this flavour needs to win a equivalent of a Nobel Prize award in the ice cream industry. This flavour is just plain genius! All of us absolutely loved this one, it was so fragrant and light, you wouldn’t get sick of it after a couple of mouthfuls like a few of the other flavours! To those that love Thai Milk Tea, this is a definite must try. It tastes just like the real thing.

On the whole, all the ice cream were real fine and fresh, you can taste that the ice cream are all made with care and much effort! At Marble Slab Creamery, you don’t have to worry about being disappointed, because quality’s definitely there. Just choose your favourite flavour and you’re on the way to heaven! Having the ice cream just bring smiles to our faces, guess that’s the kind of magic that ice cream has on people. (or gluttons like us)