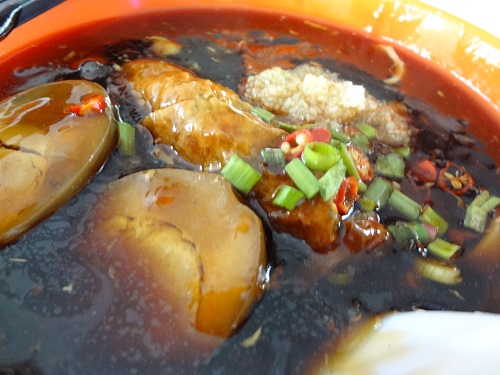 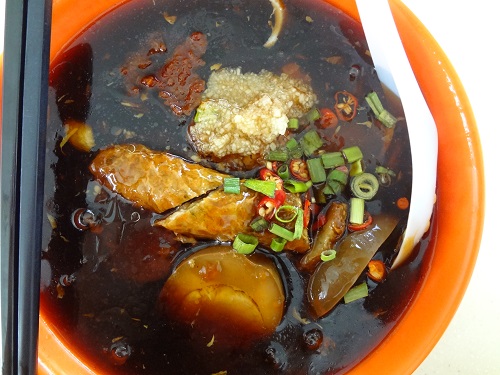 We queued for more than 40 minutes for the lor mee. Previous visits were fruitless, either gave up due to the perpetual long queue or we were there too early that we missed the operating hours. The stall only starts operation at lunch time and the crowd quickly formed.  Eating a bowl of famous lor mee sometimes truly required some patience.

The yellow noodles were covered with the rich and thick dark gravy, topped with Ngor Hiang, braised egg, shredded lean pork, slices of fish cake. Fine chopped garlic and chilli was added to enhance the taste. Overall, the bowl of the lor mee was plain looking and not too inspiring with the first impression.

The star of the lor mee lies with the gravy. The richness, stickiness, seasoning and tastefulness are most prominent factors to define a good, average or bad of the lor mee. Of course, the toppings make up the other portion of the impression.  Lorong Ah Soo Lor mee did not come with crispy fritters or crunchy fried fish which is quite a disappointment; it was just like eating a plate of chicken rice without the chicken meat. Besides the ordinary braised egg and shredded lean meat, the Ngor Hiang was not outstanding and nothing worth to mention.

The gravy was heavy on the salt making the gravy a little too salty to our liking, though the gravy was starchy thick and rich in texture. The overall taste of the Lor Mee was somehow lacking of the much needed characteristic of a good “Lor” or gravy. 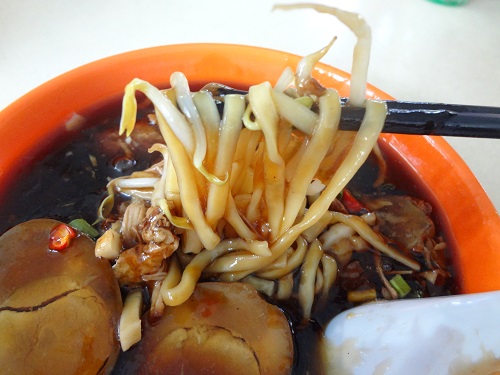 Overall, we could be more satisfied if the gravy was not too salty and  some improvement on the topping to include crispy fritters or the crunchy fried fish in the Lor mee to complement the noodle. For the glutton family, Lorong Ah Soo Lor Mee is falling short to create the distinctive uniqueness of themselves among the good Lor Mee in Singapore.   However, Lorong Ah Soo Lor Mee definitely has it own loyal patrons judging from the perpetual queue. It proves they have their own charm in a different perspective. 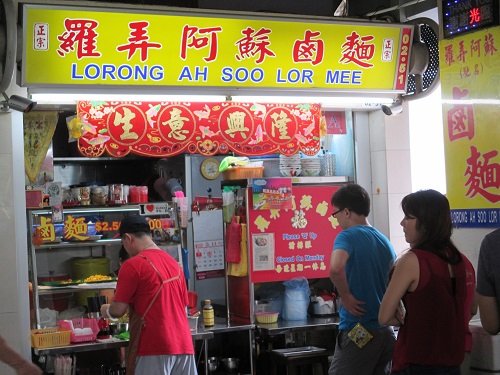 Operating Hours: 11am to 3:30pm Closed on Mondays