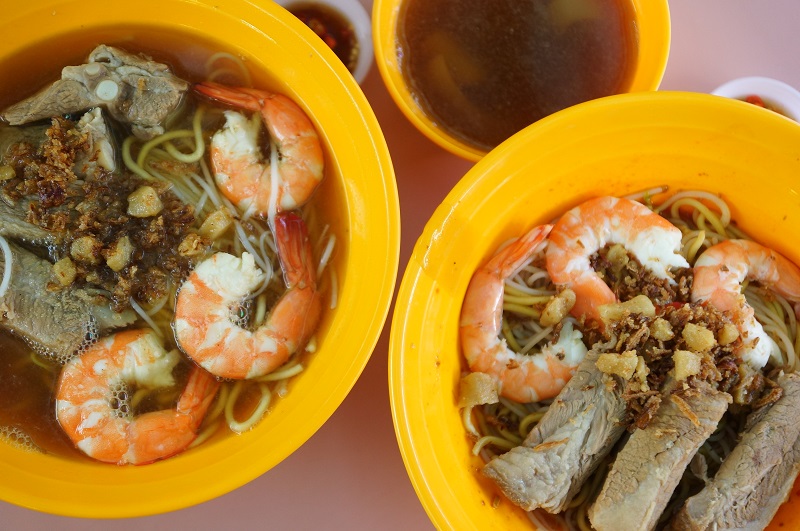 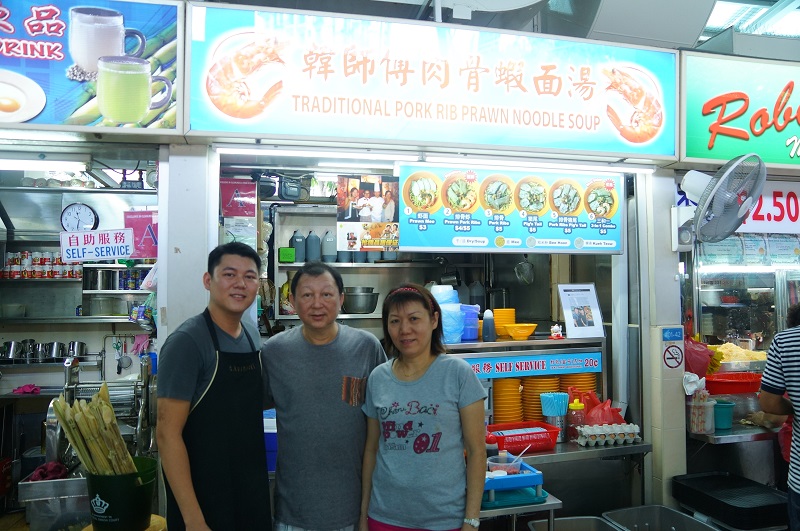 It is heartening to see young faces willing to helm the prawn mee stall from the older generation and continue to glorify a legacy. Han ShiFu traditional Pork Rib Prawn Noodle Soup is where a recipe for a new world begins – by the young Mr. Kenny Han and his parents.

The history began in the 1940s from Kenny’s grandfather, Mr Goh, who prepared the ingredients at home and served up countless bowls of prawn mee at his stall along Hamilton road off Lavender Street before retired from the business.

The son-in-law Mr Ronnie Han, a hotel Executive Chef with more than 20 years under his belt, continued the prawn mee recipe from the popular Hotel Royal Trishaw Cafe. The senior Mr Han was also invited by Mediacorp to don the guest chef’s hat in various cooking programs. The most notable appearance was Buzzing Cashier (抢摊大行动), where he had to revive the ailing business of another prawn mee stall at Tiong Bahru Food Centre by mentoring and imparting to them his traditional prawn mee recipe. Mr Han and his apprentice won over judges and landed a perfect score during the food tasting session. He retired from Hotel Royal in 2013.

With his passion and flair for the culinary arts since his childhood, 32 year-old Kenny’s desire to serve up the same prawn mee is burning brighter than before. Just last year, he heeded the calling to inject new life into the family prawn mee business. Trading his crisp, tailored shirts for the apron, he roped in his parents to reopen the stall at Whampoa Food Centre in December.

At the stall, the stock is made from scratch daily with fresh prawns, pork ribs, pigs’ tails and pig skin cooked over 2 hours every morning to intensify the taste and heighten the flavour.

With so much of the history and goodness goes in the bowl of the prawn mee, it is difficult to neglect their existence and we are glad to have the taste of Kenny’s culinary skills. 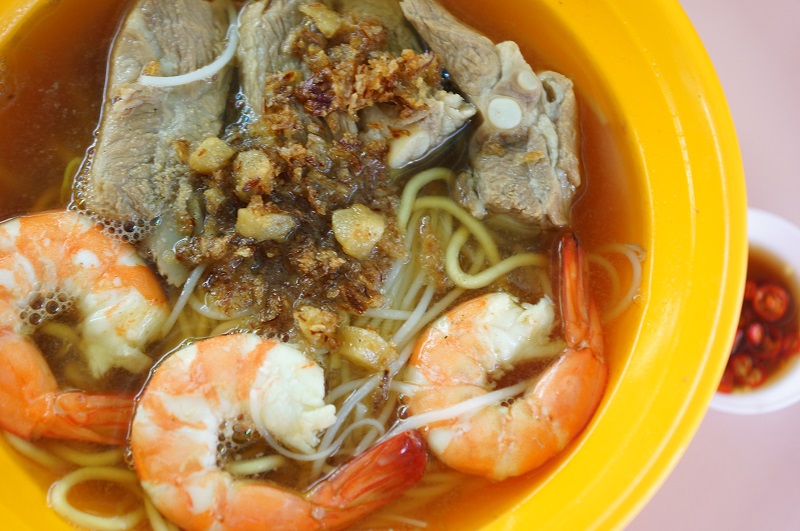 We requested for a mixture of yellow and white bee hoon, the noodles were cooked to a perfect texture, absorbed the essence of the soup which was inundated with piquant flavours, it has an enticing taste with all the sweetness and fragrance from the prawns and pork. 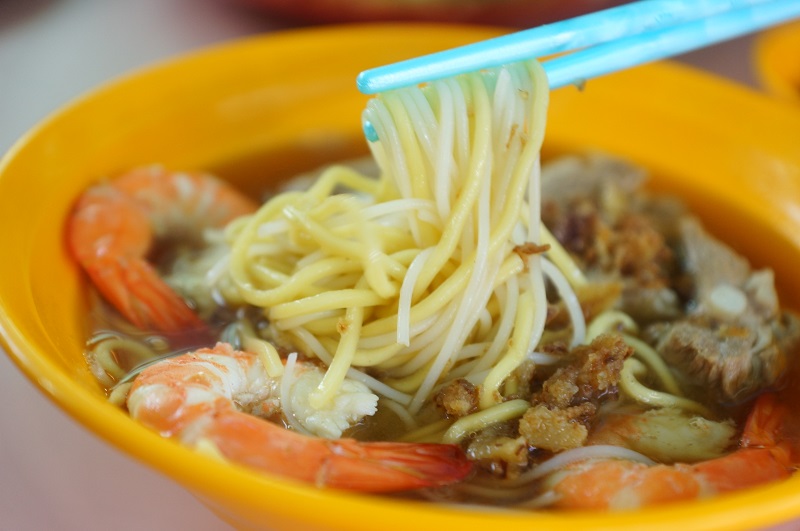 In every rendition the plum prawns were sweet and springy, pork ribs was perfectly cooked and it lifted easily from the bone and buckled readily to each bite. It is just divinely loved. 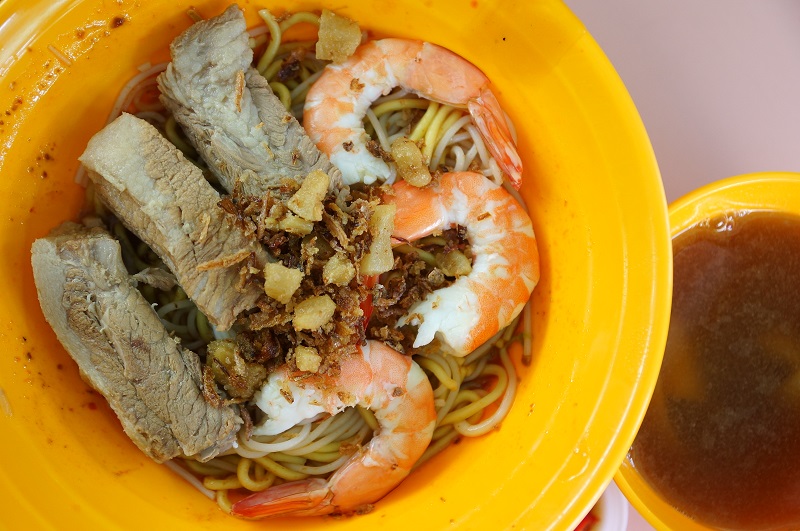 The dry version was bathed in a special homemade sauce instead of the usual ketchup to complement its sambal chilli.

We know soup is the heart of the soupy prawn mee version, the soul for the dry version prawn mee has to be the chili sauce. Amongst the four of us, we have divided opinions over the sauce, the men like it for its rich luscious sauce redolent with the generous sprinkling of crunchy fried pork lard and fresh shallots (Yes! we went for second serving!). The ladies think the sauce will be even more lovely if could be further enhanced the fragrant to perk up the robustness may be with additional dried shrimps and the seasoning. 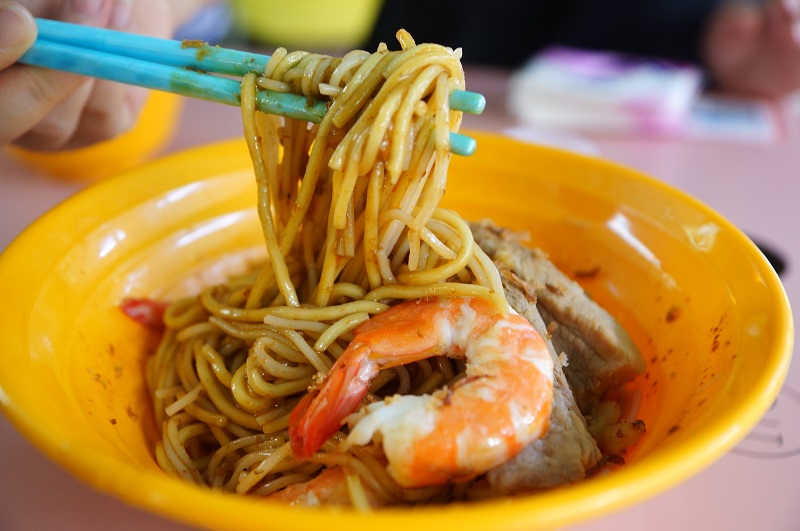 While the dry version prawn mee stirred some controversial amongst us, we have all in agreement the soup version was impeccably alluring, the slurp worthy goodness of the ubiquitous bowl of prawn mee crafted by the young Kenny was just delectable – be it the soup, the mee, the prawns and the tenderly pork ribs.

Thanks Kenny and the parents for the lovely prawn mee.