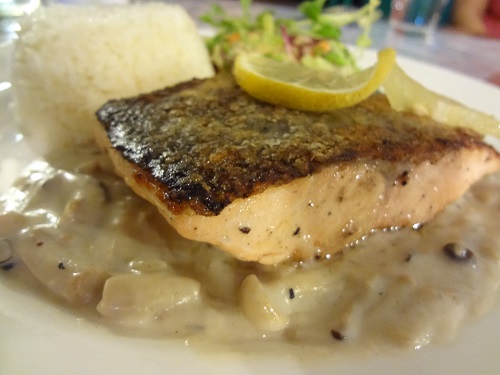 The shop is a bit run down and dilapidated furnishing can be found in some of the corners. However, overall the setting is still cozy and comfortable. Chef Robert Foo boasts of more than 40 years of culinary experience including 35 years in the 5 star international hotel and 5 years onboard a luxury cruise liners preparing fine cuisine for the world. Not content to rest at home after his retirement, he choose to continue his helm and passion in the kitchen by offering the public to enjoy his culinary skills combined the fusion of Hainanese and Western delight.

The restaurant was quite full when we reached there at 7pm, luckily we had made the reservation and no time wasted in waiting. The first impression of the café was mixed, you saw family with young kids devouring the food, couple sipping the fine wine and young executive imbibe the beer relaxingly, looks like this is a place for everyone.   We ordered the famous roast duck, Hainanese pork chop, fish & chips, My daughter went for the Salmon without the second thought when she read the display on the table and menu boasting about the salmon dish, a dish that was served to Queen Elizabeth by Chef Foo during her visit to Singapore in the 80’s. Guess what? My princess wanted to have a feel of eating like the Queen! What a kiddy but to make her dream come “truth”, she had her salmon at last….Happy? My majesty “Queen”….

We are certain that Queen Elizabeth picked the right dish to have Grilled Salmon steak prepared by the Chef Foo, the Salmon was cooked to a perfection with crispy skin covered the juicy and tender meat. The gravy well complemented the Salmon, the tinge of pink was simply palatable to the taste buds, and we love how the salmon crumbled in the mouth together with the nice and fluffy buttered rice. 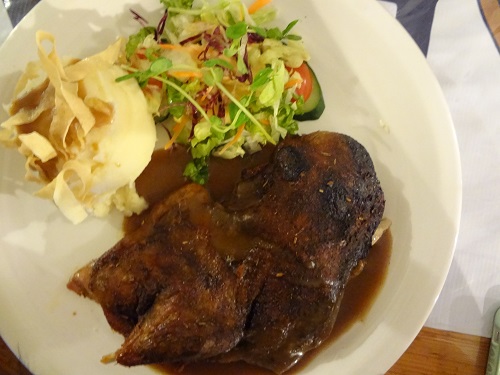 Roast duck is the house famous and signature dish highly recommended by many. The duck had a crispy skin and the overall was well marinated and cooked, the sauce complemented the duck very well and a truly scrumptious dish that one’s cannot missed. The only imperfection was the lack of juiciness from the duck meat, a little too dried in our opinion. 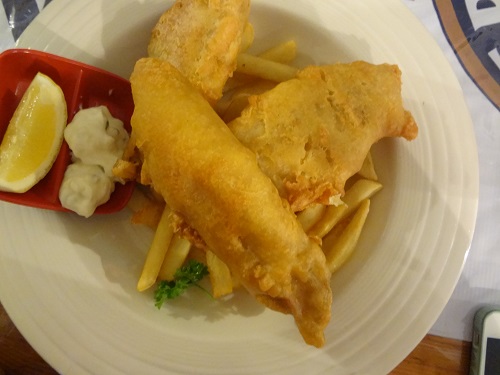 Fish and chip served with French fries, the fish fillets were much thicker than the normal but the coating was as thin as the paper, may be due to the thick fillets, the fishiness was rather distinct and may not be appealing to some. However, the French fries was carefully fried to retain the moist and softness internally with right crispiness on the exterior. We are sure the kids will yearn for more. 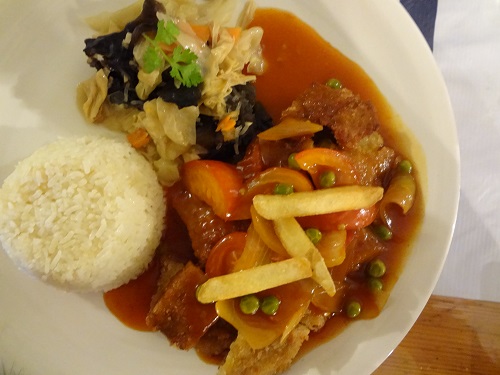 Hainanese is somehow good with Pork chop, Chef Foo never let his speciality gone unnoticed, he successfully integrated the East and the West by creating a dish that inherited the finest of both worlds. A pleasing flavourful delicacy that hype by the Hainanese and is now prevalent beyond the boundary and reaches many others. The crispy skin and the tenderness of the meat with the tomato based sauce was well received by all of us. The pork chop was relished to the taste buds complemented by the nice fluffy rice and the mouth-watering cabbage. Nice. 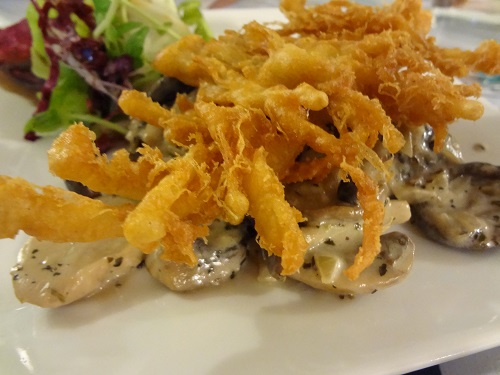 A combination of different species of mushroom, some fried and others cooked with special sauce topped with green salad. This is the only dish we were not too satisfied, partly the portion was relatively small compared to others, the taste was nothing commendable, for the price you paid, it is more worth to go for the main course. 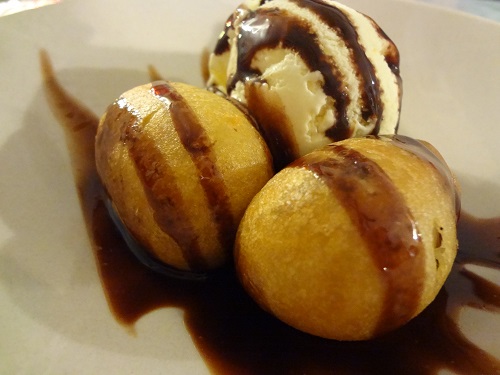 When the desserts were served, it came with just two brown eggs as shown in the pictures without the ice cream and the chocolate deco! We were  puzzled why the Deep Fried Mars Bar and the Snickers Bar turned out to be two brown eggs or tea leave eggs looks alike, curiosity to find out probably the most unique desserts in  the world and admire the creativity of the chef of using just two “eggs” for the desserts, While we attained to dissect the “eggs” (may be a chick will jump out to surprise us), we saw the waiter scurried over to our table and snapped the “eggs” away…. Ha! Ha! They forgot to add  the ice cream !!

The dessert was deep fried Mars Bar, yes, Mars Bar – the chocolate bar wrapped with sticky chocolate that anyone can buy from the supermarket or shops. The chef cleverly coated it with the flour and deep fried to look an egg. It was served with ice cream and a spoonful of ice cream with a chip of the fried Mars Bar, wow… perfect finishing touch to our dinner.

Foo House bar and café boasting a vividly feel of a western pub with a light touch of a Hainanese elements. Good value and good taste for food, a good chill-out place for all. Go and try it out. 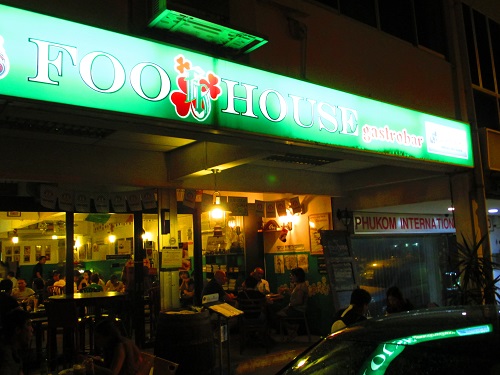