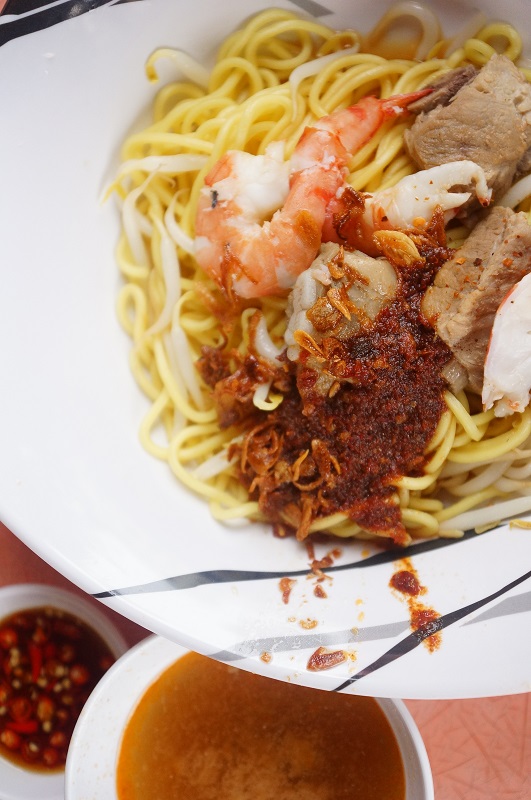 Serving up piping hot bowls of prawn noodles since 1966, 40 over years of experience dealing with these crustaceans is nothing to be sniffed at. But we are curious if Da Dong Prawn Noodles has maintained the standards people have been raving about over the years. And as part of our mission to lock down the best prawn noodles in Singapore, we came here to find out. 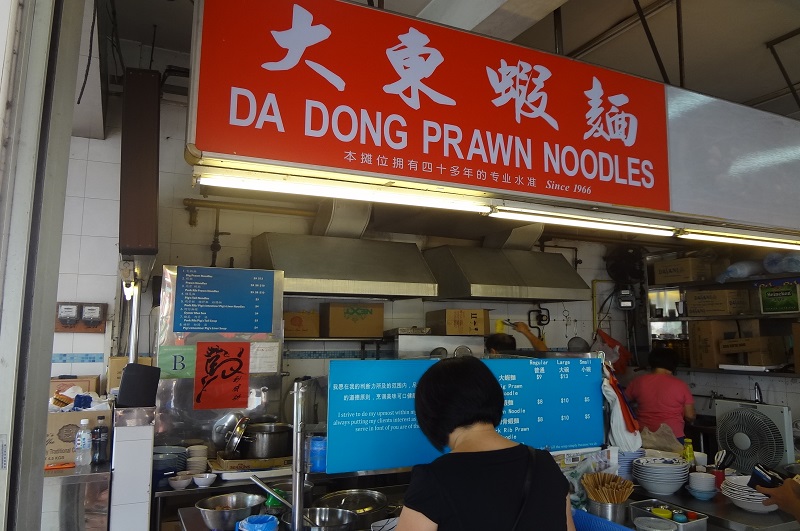 Fans of Da Dong Prawn Noodles probably get quite annoyed with the frequent shifting, opening and closing of this highly dynamic stall, like a mischievous boy that’s unable to sit still, it is quite a feat trying to keep track of where the shop would move to next. As of now, the shop has re-appeared at Joo Chiat road, occupying a stall in the coffeeshop.

Good prawn noodles usually go for sea-caught prawns and not farm-bred prawns for their sweetness and texture; talking to prawn mee owners, they will tell you that it is not easy to secure a consistent supply of good sea caught prawns. So it’s definitely a key differentiator that Da Dong uses sea-caught prawns in their noodles.

As always, we ordered both the dry and soup version. 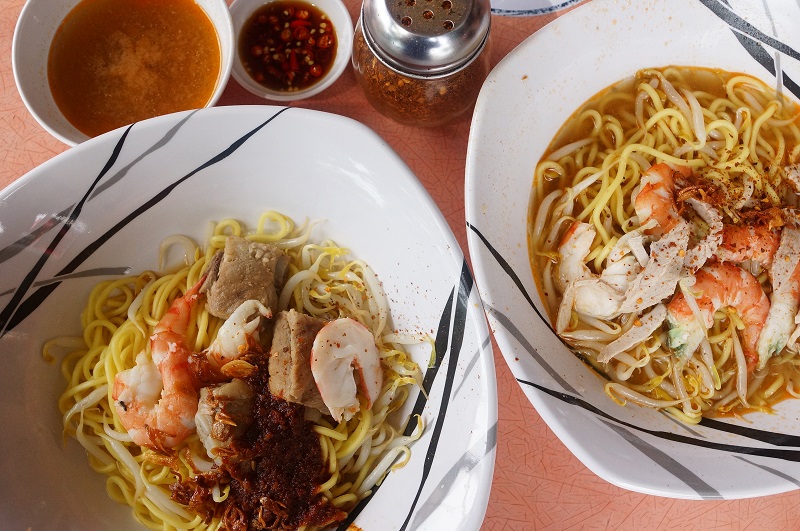 Dry version ($8) – the sauce blended well with the noodles, with the shallot oil and ingredients harmonizing well, just that the portion was probably a little small for the price we paid.

The broth was their secret and heavily guarded weapon, and every bowl of dry prawn mee came with a small bowl of prawn stock. We could taste the freshness and sweetness of the stock, probably the key in attracting all their fans.

Good prawn stock only uses the freshest ingredients, with long hours taken to slowly boil it to perfection. Pork bone and other seafood are added to enhance the flavour, and takes easily a few hours of painstaking effort everyday just to prepare pots of stock and once the stock runs out for the day, that’s it for the day. 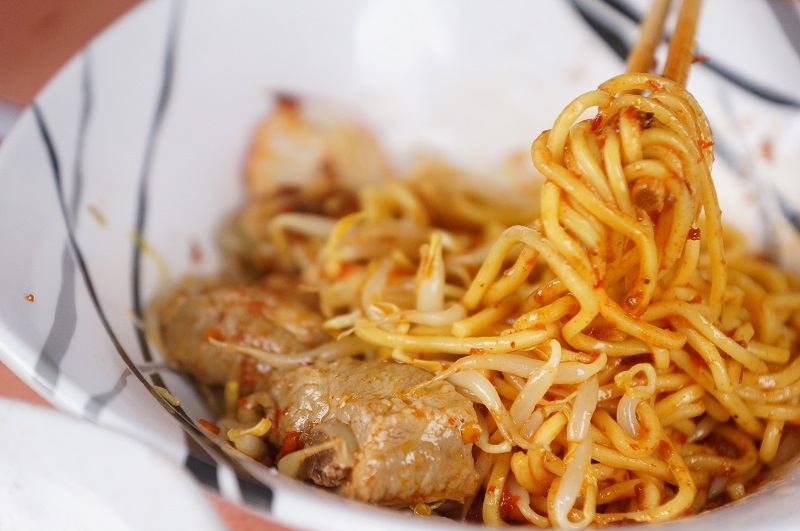 Which is why for Da Dong Prawn Noodles, the broth is highly precious here, never ask for refill or an extra scoop of stock, the signboard makes it clear that refills will not be entertained. So cherish that bowl of soup!

The pork rib was not as tender as expected but at least it doesn’t carry more fat than meat, or more bone than meat.

Soup version ($8) – again the bowl of prawn mee was quite small with two small prawns, some bean sprouts and a few slices of pork. The two prawns were sliced in half which made it easy to eat but the black and green intestines were not properly removed and looked off-putting. 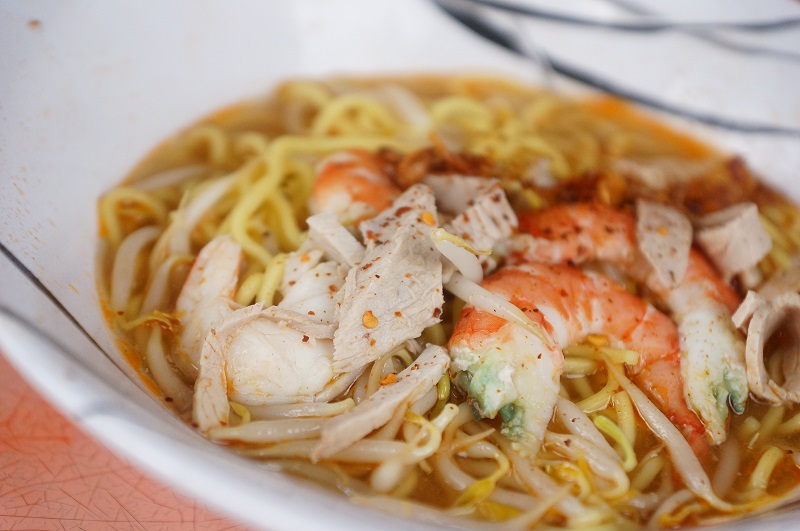 The broth was tightly controlled and the soup level hardly even covered the noodles. We like the broth but we only have that few spoonfuls to enjoy, we had to take it sip by sip so as to fully appreciate the soup. 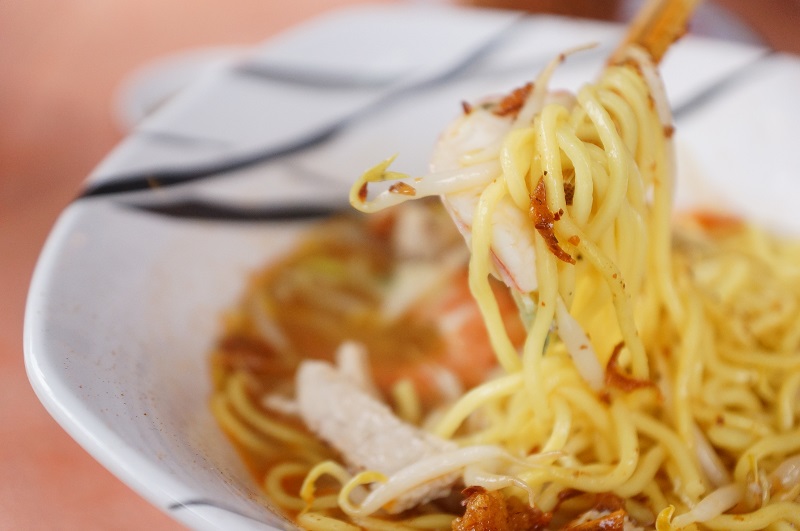 Our verdict, Da Dong Prawn Noodles has good prawn broth, except that the portion may be not as generous as some other famous prawn mee stalls. Steep pricing and tight control of portion size might be an issue for some here!