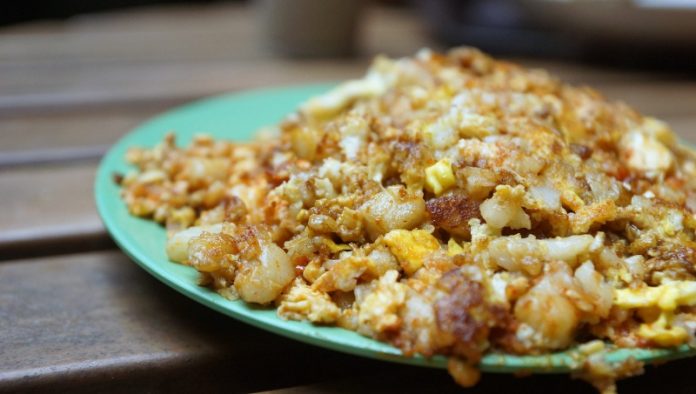 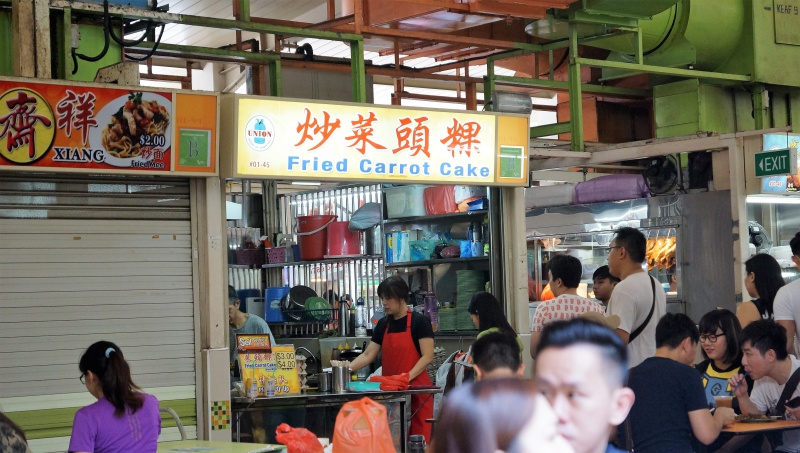 This fried carrot cake stall has no official name and only “Fried Carrot Cake” on the signboard but the queue was  long! The stall only operates for few hours in the morning and is usually sold out before noon, so you have to be early to have a taste of their carrot cake.

The stall serves both the ‘white’ and ‘black’ fried carrot cake, we waited for more than 30 minutes in the queue and decided to go with up-sized servings of both white and black versions to justify the time spent.

The radish (commonly called ‘white carrot’ in Chinese) cake is chopped into tiny bites and fried with a copious amount of eggs and cai poh (preserved radish). The chef was heavy-handed with dark sauce, making its sweetness overwhelming. The sugary taste overpowered and masked the flavour of the radish, eggs and the cai poh.

The texture was mushy and the black sweet sauce failed to caramelise on the surface for a more crisp and charred texture.

The white version was savoury and less cloying, but the mushy texture was less ideal compared to the crispy but soft texture that we prefer for carrot cake. The flavour was much better than the black version, at least we can appreciate some elements of a good carrot cake, though it may not be enough to lure you back for more.

The generous serving size for $4 was the only other consolation.

The fried carrot cake at Clementi 448 may have its loyal fans judging by the snaking queue and long waiting time. However, we have slightly different opinions on the carrot cake. Perhaps it was just a mishap or an off-day but until we can be convinced again, there are definitely some rooms for improvement.