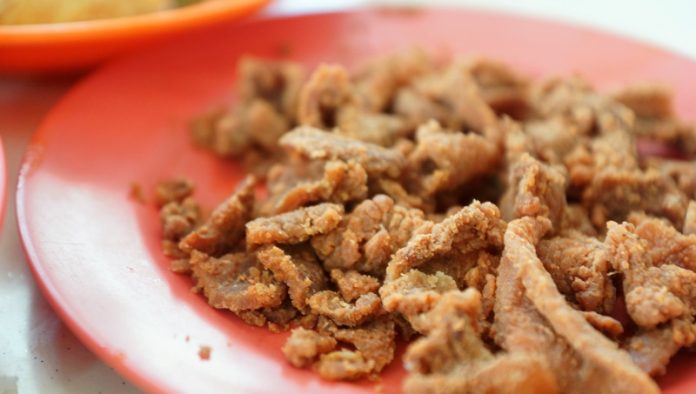 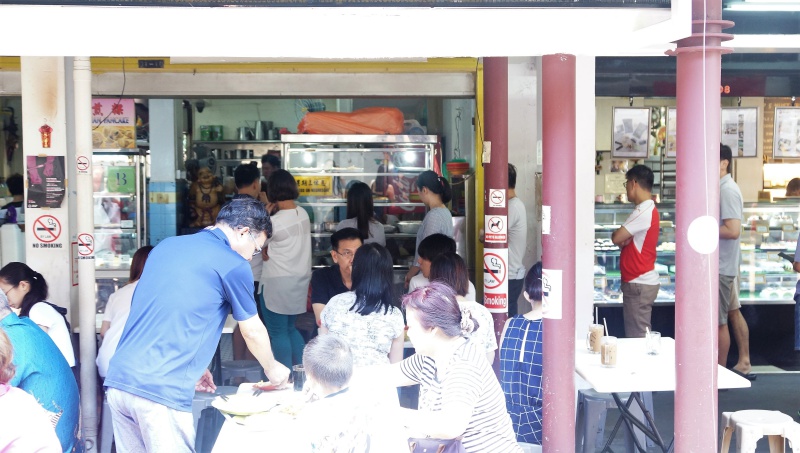 Doused and soaked in a questionable mixture of red, orange and black gravy, Hainanese curry rice can either look like a mouth-watering option for lunch, or a plate of gathered leftovers. Despite its dubious appearance, the magnetism of curry never loses its powers, and never fails to attract perpetual queues.

It was only slightly past 11am, but the queue in front of the Beo Crescent Hainanese Curry Rice already made the wait ahead seem brutal. The stall is not too far from another popular curry rice outlet – Loo’s Hainanese Curry Rice from Tiong Bahru. It is our favourite so far speaking of Hainanese curry rice, and will be used as a benchmark for comparison.

Beo Crescent Hainanese Curry Rice is located in a coffeeshop next to the Beo Crescent Food Centre. There are not many tables around in the coffeeshop and you will be asked politely to give up your seats the moment you scrape that last grain of rice from your plate. 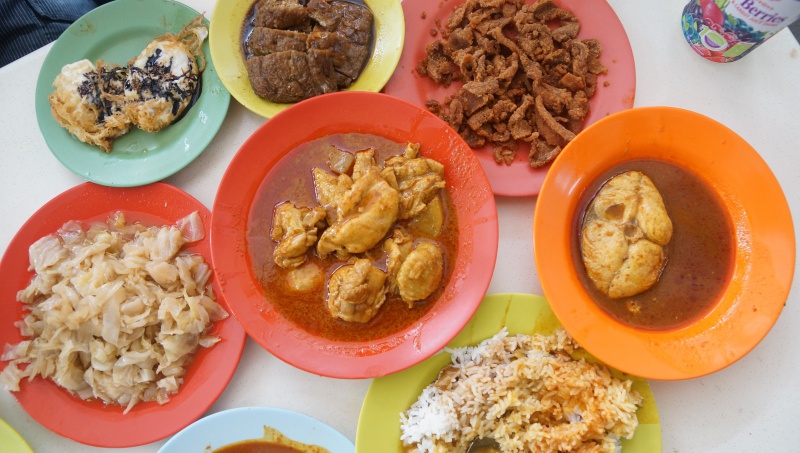 The rice was slathered with different types of gravy, from spicy, to sweet and to sour. The flavours got a little complicated, but the odd mixture was generally acceptable. 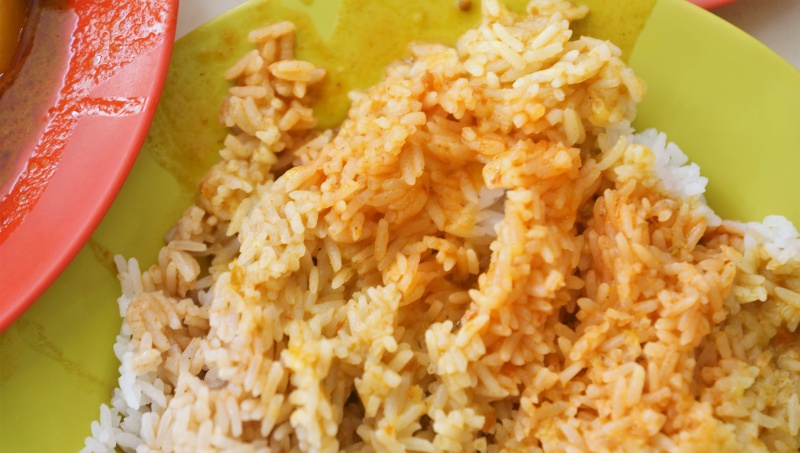 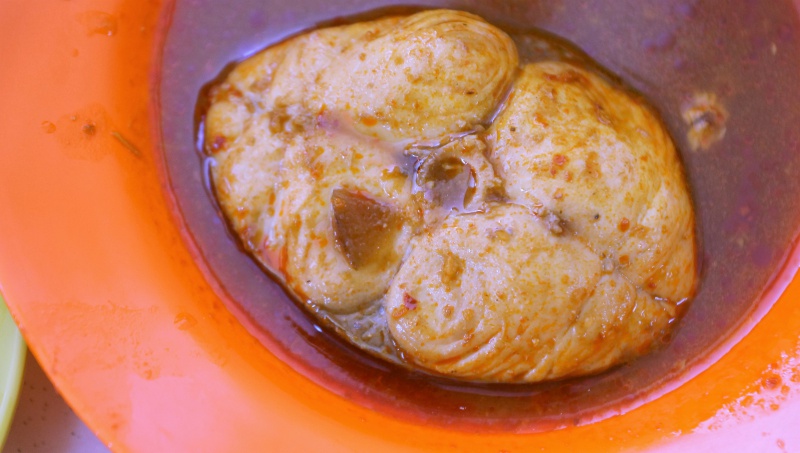 The fish itself was way overcooked and was further dragged down by the monotonous flavour of the sour Assam, a featureless gravy which failed to do anything for the dish. (Rating: 1.0 / 5) 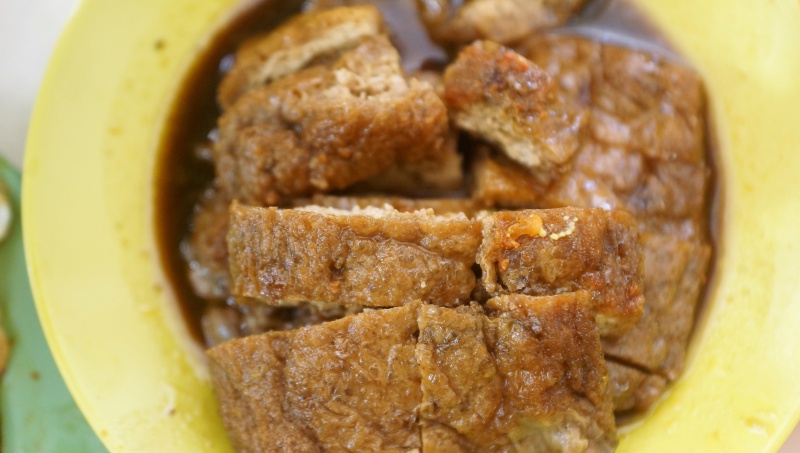 There are different qualities of Tau Pok available in the market, usually determined by how fine their textures are. Unfortunately, the Braised Tau Pok here was coarse, and lacked the delicacy of a good puffed beancurd. The gravy was also too ordinary, and further dampened the overall taste of the dish. (Rating: 2.5 / 5) 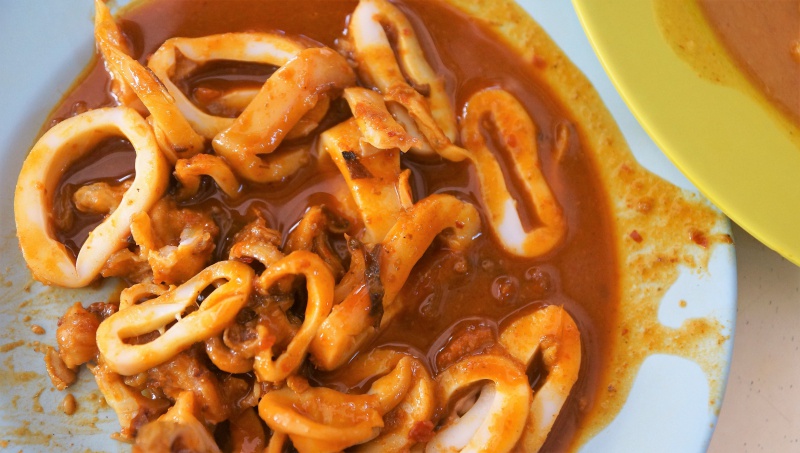 Compared to Loo’s Hainanese Curry Rice, the sotong from Beo Crescent Curry Rice was less meaty and tough – a sign of the overcooking of this valuable ingredient. Sambal curry was missing the flavour as well. (Rating: 2.0 / 5)

The cabbage was stewed to a nice, soft texture, which brought out the sweetness of the veggie. One of the two dishes we like here. (Rating: 4.0 / 5) 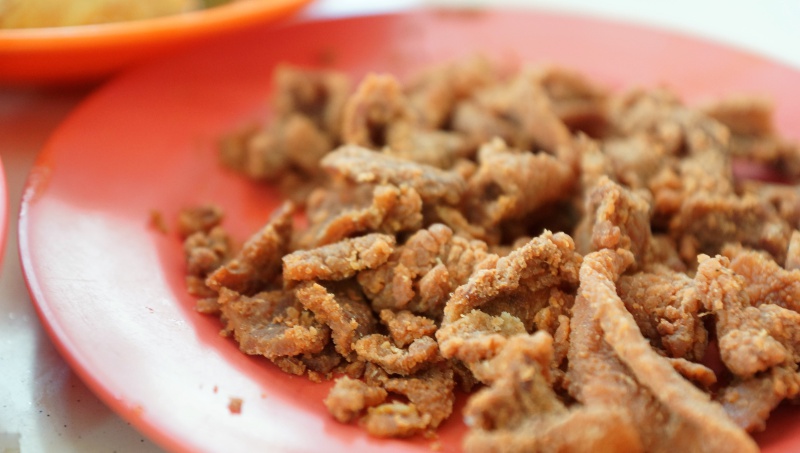 The signature crispy pork chop is one that hit the right spots. Unlike the usual pork chops with unpleasantly thick batter, Beo Crescent Curry Rice has its pork chop thinly sliced, hammered, seasoned, then deep fried to a dark brown for a cracking biscuit-like texture. It was so fragrant and addictive to the bite, my two adult kids were tempted to have second serving if not discouraged by the unbelievable queue. (Rating: 4.5 / 5)

The curry chicken was not tender and soaked in insipid curry gravy, a disappointing dish. (Rating: 2.0 / 5)

Beo Crescent Hainanese Curry Rice impressed us with its unique crispy pork chop, but the rest of the dishes we tried were painfully substandard. A massive gap needs to be filled when compared to Loo’s Hainanese Curry Rice, which is far more superior its quality, flavour and texture.

Where to go for good curry rice? Hmm…..we are quite sure it is still Loo’s Hainanese Curry Rice.